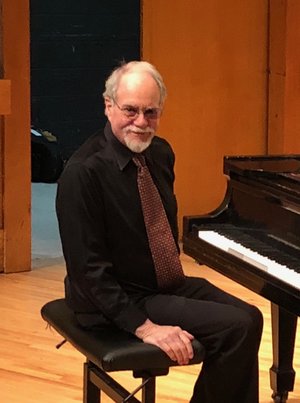 Peter Winkler studied with Earl Kim at Princeton and as a member of the Society of Fellows at Harvard University. While a student in the mid-1960's he was "fatally" seduced by the music of the Beatles and Motown, and began a life-long creative and scholarly involvement with popular music. His compositions include both concert works and music for the theater, and many of his pieces explore connections between popular and classical idioms. In 1978, his Symphony was premiered at the grand opening of the Staller Center at Stony Brook. Recent works include "A Midsummer Overture" for orchestra, commissioned for the 20th anniversary of Midsummer Musical Retreat in Washington, "Partita" for Baroque ensemble, commissioned and performed by the Stony Brook Baroque Players conducted by Arthur Haas, "Requiem Aeternam" for chorus, in memory of the victims of September 11, 2001: "Out!" a musical for the Connecticut Gay Men's Chorus (book and lyrics by Winston Clark), "Nine Waltzes", commissioned by the Guild Trio, and "Serenade",commissioned by the Kammergild Chamber Orchestra.The history and theory of popular music are a focus of Mr. Winkler's research and teaching; he is one of the founding members of the International Association for the Study of Popular Music, and has published several papers on popular music. As a pianist, he appears with Rhoda Levine's opera improvisation group, Play It By Ear, and with his wife, violinist Dorothea Cook, in the duo Silken Rags.