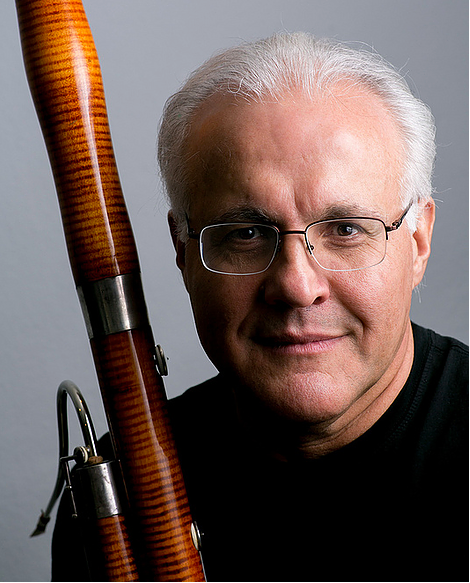 Frank Morelli, bassoon, studied with Stephen Maxym at the Manhattan and Juilliard schools of music, and holds the distinction of being the ﬁrst bassoonist to be awarded a doctorate by the Juilliard School. Since his Carnegie Hall concerto debut in 1973, Mr. Morelli has been heard internationally as a soloist and with chamber and orchestral ensembles. One of the most active bassoonists recording today, he has well over one hundred recordings for major record labels to his credit. His performances and recording of the Mozart bassoon concerto with the Orpheus Chamber Orchestra on the Deutsche Grammophon label met with international critical acclaim, and his recording of Mozart’s Sinfonia Concertante for Winds and Orchestra with Orpheus for Nonesuch Records was named Recording of Special Merit by Stereo Review. Mr. Morelli’s recording with Orpheus of Copland’s Appalachian Spring won a 1990 Grammy nomination for best classical recording, and his recording with Orpheus of music by Stravinsky, Shadow Dances, won a Grammy in 2001. Mr. Morelli has appeared often with the Chamber Music Society of Lincoln Center and is principal bassoonist of the New York City Opera Orchestra, Orpheus, Brooklyn Philharmonic, and the American Composers Orchestra. He is a member of the acclaimed woodwind quintet Windscape. He is the editor of Stravinsky: Difﬁcult Passages, a collection of excerpts published by Boosey and Hawkes. He also serves on the faculties of the Juilliard School, the Manhattan School of Music and Yale.