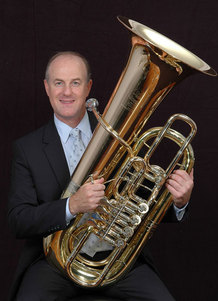 Kyle Turner has lived and freelanced in New York City for more than 30 years. He is currently principal tubist with the American Symphony and the Orchestra of St. Luke’s.  Mr. Turner performed and toured the world in over 500 concerts with the New York Philharmonic as acting interim principal from 2001 – 2004.  He was awarded the Walter W. Naumburg chamber music prize in 1992 as a member of the Saturday Brass Quintet.