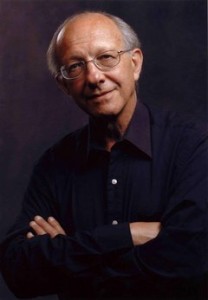 As head of the performance faculty, Gilbert Kalish had done much to create the uniquely supportive and stimulating environment of Stony Brook's music department. Through his activites as performer and educator, he has become a major figure in American music making. A native New Yorker, Mr. Kalish studied with Leonard Shure, Julius Hereford and Isabelle Vengerova. He is a frequent guest artist with many of the world's most distinguished chamber ensembles. He was a founding member of the Contemporary Chamber Ensemble, a pioneering new music group that flourished during the 1960's and '70's. He is noted for his partnerships with other artists, including cellists Timothy Eddy and Joel Krosnick, soprano Dawn Upshaw, and, perhaps most memorably, his thirty-year collaboration with mezzo-soprano Jan DeGaetani. In addition to teaching at Stony Brook, he has also served on the faculties of the Tanglewood Music Center, the Banff Centre and the Steans Institute at Ravinia. Mr. Kalish's discography of some 100 recordings encompasses classical repertory, 20th-century masterworks and new compositions. In 1995 the University of Chicago presented him with the Paul Fromm Award for distinguished service to the music of our time.

Gilbert Kalish leads a musical life of unusual variety and breadth.  As educator he is Leading Professor and Head of Performance Activities at the State University of New York at Stony Brook. From 1968-1997 he was a faculty member of the Tanglewood Music Center and served as the "Chairman of the Faculty" at Tanglewood from 1985-1997. He often serves as guest faculty at distinguished music institutions such as the Banff Centre and the Steans Institute at Ravinia, and is renowned for his master class presentations.

Mr. Kalish's discography of some 100 recordings encompasses classical repertory, 20th Century masterworks and new compositions. Of special note are his solo recordings of Charles Ives' Concord Sonata and Sonatas of Joseph Haydn, an immense discography of vocal music with Jan DeGaetani and landmarks of the 20th Century by composers such as Carter, Crumb, Shapey and Schoenberg. In 1995 he was presented with the Paul Fromm Award by the University of Chicago Music Department for distinguished service to the music of our time.