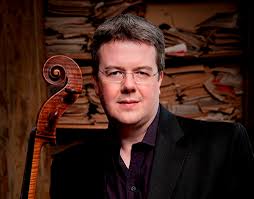 Paul Watkins enjoys a career as solo cellist, conductor and chamber musician. As soloist he has performed regularly with all the major British orchestras and made six appearances at the BBC Proms, most recently in a televised performance of the Elgar Cello Concerto at the First Night of the Proms recorded live by Deutsche Grammophon. Recent highlights have included his debut at Carnegie Hall performing Brahms’ Double Concerto with Daniel Hope, and concerto appearances with the Hong Kong Philharmonic and Philharmonia Orchestras. Winner of the 2002 Leeds Conducting Competition, Paul Watkins became the first ever Music Director of the English Chamber Orchestra in 2009 and is also Principal Guest Conductor of the Ulster Orchestra.  A dedicated chamber musician, Paul Watkins has been a member of the Nash Ensemble since 1997.  His first recording as a conductor (Britten and Berg Violin Concertos with Daniel Hope for Warner Classics) won a Schallplattenpreis in Germany and was nominated for a Grammy Award.