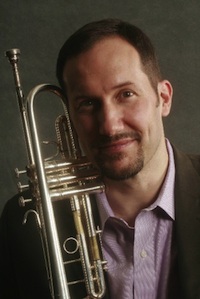 Kevin Cobb was born in Bowling Green, Ohio where he began trumpet studies at age ten with Martin Porter. He gave his first solo performance with the Naperville, Illinois Municipal Band at age thirteen playing Herbert Clarke’s “Debutante”. At age fifteen he performed solo with the Toledo Symphony as winner of their youth solo competition. From 1986-89   he attended the Interlochen Arts Academy where he studied trumpet with John Lindenau and graduated with honors. He received a bachelor of music degree in 1993 from the Curtis Institute of Music where he studied with Frank Kaderabek, and a master of music degree in 1995 from The Juilliard School as a student of Mark Gould. Mr. Cobb joined the American Brass Quintet in the fall of 1998 and with that appointment also became a faculty member of The Juilliard School and the Aspen Music Festival and School. He also currently serves on the faculty of the Mason Gross School of the Arts at Rutgers University.

When not touring with ABQ, Mr. Cobb enjoys an active teaching and performance career in New York City. As part of a widely diverse freelance life, he often plays with new music groups such as Speculum Musicae, and the New York New Music Ensemble, as well as with the Metropolitan Opera, the Orchestra of St. Luke’s, the New York City Ballet, and the New York Philharmonic. From 1995-98, he spent his summers as principal trumpet for the Utah Festival Opera Company. He is also a member of the New York Big Brass, plays in Broadway shows, tours with the Paragon Ragtime Orchestra, and can frequently be heard in radio and television commercials. He has even played with the Orchestra of St. Luke’s as they accompanied Mettalica at Madison Square Garden for a sold out audience.

Mr. Cobb has participated in   chamber music at every stage   of his development and is a former member of the Manhattan Brass Quintet and the Meridian Arts Ensemble. In addition to playing, he has also served as juror with Young Concert Artists and the Fischoff Chamber Music Competition .  As a soloist, he   toured the US with the Israel Camarata of Jerusalem playing the Shostakovich Concerto for Piano, Trumpet and Strings .  In 2003 he was a featured soloist with the Daejeon Philharmonic in South Korea playing the Haydn Concerto on national television.