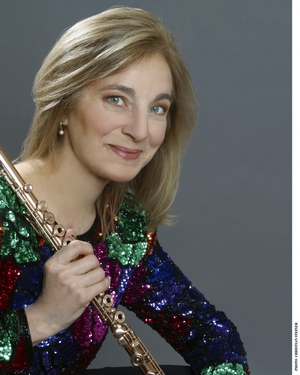 Carol Wincenc is one of the most respected and acclaimed flutists performing today. She appears with orchestras worldwide and has premiered works written for her by numerous prominent composers.  In the 2009-2010 season, she celebrated her 40th anniversary as a performer with the Carol Wincenc Ruby Anniversary Series, a three-concert series in New York taking place at Merkin Concert Hall, The Morgan Library & Museum, and The Juilliard School featuring the premieres of six newly-commissioned works by Joan Tower, Jake Heggie, Thea Musgrave, Shih-Hui Chen, Andrea Clearfield, and Jonathan Berger.

Ms. Wincenc's musicianship is matched by a deep commitment to expanding the flute repertoire. With the Detroit Symphony, she gave the world premiere of a flute concerto written for her by Pulitzer-Prize winner Christopher Rouse. Ms. Wincenc also gave the world premiere of Henryk Gorecki's Concerto-Cantata at Amsterdam's Concertgebouw and the U.S. premiere with the Chicago Symphony. She is in demand for her interpretation Lukas Foss's Renaissance Concerto for Flute and Orchestra – a work written for her, and has premiered concerti by Peter Schickele, Joan Tower, Paul Schoenfield and Tobias Picker, who composed The Rain In the Trees, a double concerto for her and soprano Barbara Hendricks inspired by the rainforest poems of W.S. Merwin.

Recent appearances have included performances of Christopher Rouse’s Flute Concerto with the Rockford Symphony (IL), the Santa Rosa Symphony (CA), and ProMusica Columbus.  In the past two seasons, she has performed with the Chamber Music Society of Lincoln Center.  In the summer of 2007, Ms. Wincenc received the Distinguished Alumni Award from the Brevard Music Center and inaugurated the new Barrere Flute Studio at the Chautauqua Institution with a solo recital.

Ms. Wincenc has appeared with the St. Louis, Atlanta, and Seattle Symphonies; the Los Angeles and St. Paul Chamber Orchestras; and at the Mostly Mozart, Santa Fe, Spoleto, Caramoor, Marlboro, Sarasota, and Music @ Menlo festivals. Overseas, Ms. Wincenc has given acclaimed performances with the London Symphony Orchestra, the English Chamber Orchestra, and at the Aldeburgh, Budapest, Tivoli, and Frankfurt international music festivals.  Equally sought after as a chamber musician, Ms. Wincenc has collaborated with the Guarneri, Emerson, and Tokyo string quartets; performed with sopranos Jessye Norman and Elly Ameling; pianist Emanuel Ax; and cellist Yo-Yo Ma. Carol Wincenc is flutist with the New York Woodwind Quintet.

Carol Wincenc is a prolific recording artist; she was nominated for a Grammy Award for the 2005 Naxos recording of works by Yehudi Wyner with Richard Stoltzman and other renowned colleagues. Her recording of Christopher Rouse’s Flute Concerto for Telarc with Christoph Eschenbach and the Houston Symphony won the highly coveted Diapason d'Or.

Ms. Wincenc is a professor of flute at both the Juilliard School of Music and Stony Brook University. She often serves as a judge for prestigious competitions, including, in 2009, the Walter W. Naumburg Chamber Music Competition and the Kobe International Flute Competition.

Carol Wincenc is a native of Buffalo, New York. She began studies on the violin at four and the flute at age nine.  As a teenager she studied with Italian virtuoso Severino Gazzelloni and then with Robert Willoughby at Oberlin. She also studied with legendary French flute master Marcel Moyse at the Marlboro Music Festival.  Post-graduate studies were at the Manhattan School of Music and at Juilliard under Arthur Lora.  Ms. Wincenc was First Prize Winner of the Walter W. Naumburg Solo Flute Competition in 1978.