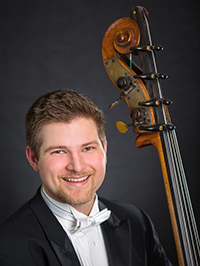 Bassist Blake Hinson joined the New York Philharmonic in 2012 after a two-year appointment as Principal Bass of the Grand Rapids Symphony. Previously, he played with the New World Symphony as a fellow, and performed with The Philadelphia Orchestra. A native of West Des Moines, Iowa, Mr. Hinson was accepted at age 16 to The Curtis Institute of Music, where he studied with Philadelphia Orchestra Principal Bass Harold Robinson and Edgar Meyer. He spent three summers at the Aspen Music Festival and School on fellowship, where he played in the Aspen Chamber Symphony and Aspen Festival Orchestra and won the 2006 low strings competition. Mr. Hinson won third prize in the 2009 International Society of Bassists Double Bass Competition and made his solo debut at Boston’s Symphony Hall.

Mr. Hinson has taught at the Richard Davis Bass Foundation weekend, has coached the New York Youth Symphony bass section, and served as a clinician for Manhattan Concert Productions at Carnegie Hall.