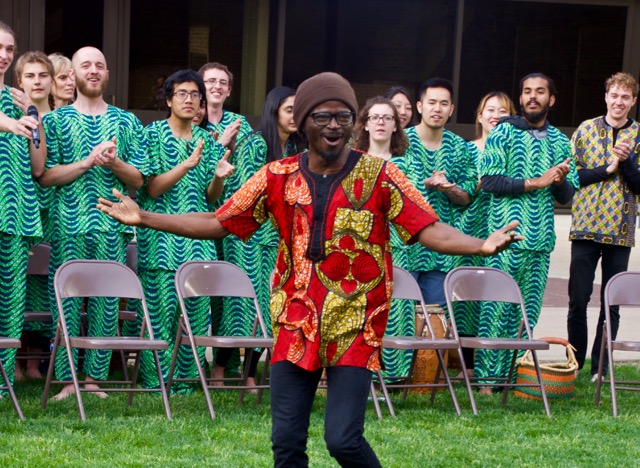 Born and raised in a family of musicians in Benin, West Africa, Hulengansodji (JB) Gnonlonfoun is a composer, singer, percussionist and dancer. Since coming in 2013 to the US with his band Jomion and the Uklos to give a workshop in Beninese traditional music at Harvard University, Mr, Gnonlonfoun has pursued a number of musical projects in the United States. He has performed in a variety of venues in New York City, including Minton’s House (Harlem), the Yam Sessions at the Shrine (Harlem), Lacaye (Brooklyn), BB King’s (Times Square), and Lincoln Center Outdoors. He has given regular concerts and educational workshops at many schools and universities, including Brandeis University, Mount Holyoke College, Amherst College. Other recent projects include a recording with Bobby McFerrin and an appearance with the Eagles in Madison Square Garden. He currently directs Voice of Zion, a church choir in Brooklyn. The Jomion and the Uklos band, with Mr. Gnonlonfoun on vocals, keyboards and percussion, was featured on a recent Afropop Worldwide radio program that explored the group’s unique approach to integrating traditional Beninese and contemporary sounds. Mr. Gnonlonfoun teaches both beginning and advanced sections of VOLTA, Stony Brook’s African musical ensemble, incorporating traditional music, singing and dance.