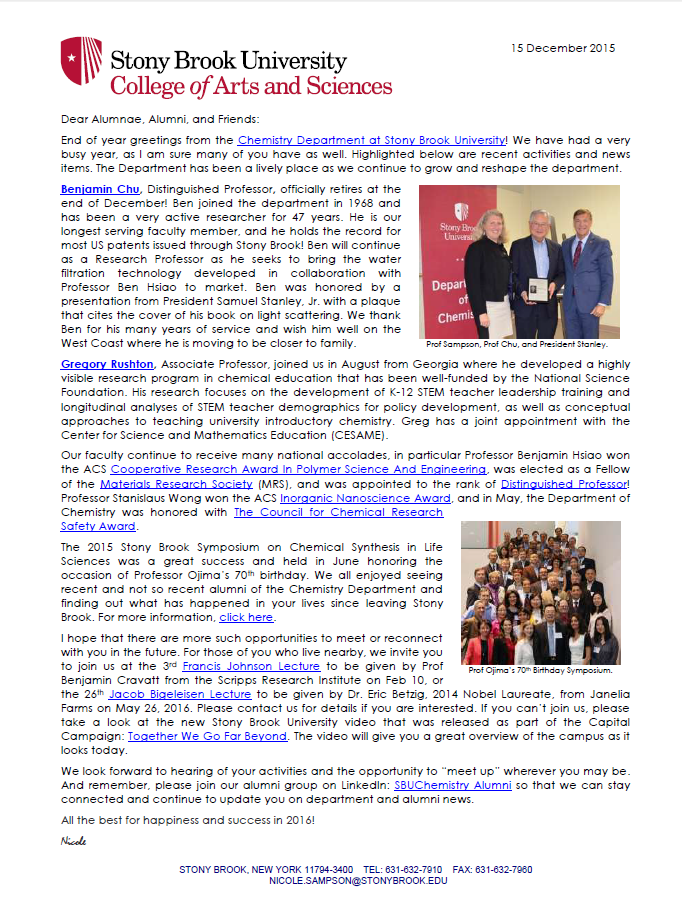 •Congratulations to Prof. Benjamin Hsiao on his appointment to the rank of Distinguished Professor

Professor Kate Aubrecht from the Department of Chemistry will be recognized as one of the 2016 recipients of the American Chemical Society's Committee on Environmental Improvement Award for Incorporating Sustainability into Chemistry Education.
They are recognizing her work in developing a curriculum, "Connecting Chemistry to Sustainability for both Science Majors and Non-Science Majors".

The award program seeks to recognize those individuals and organizations that have made exemplary contributions to the incorporation of sustainability into chemical education.

Professor Aubrecht will present her work and receive the award at the Spring 2016 American Chemical Society Meeting in San Diego. 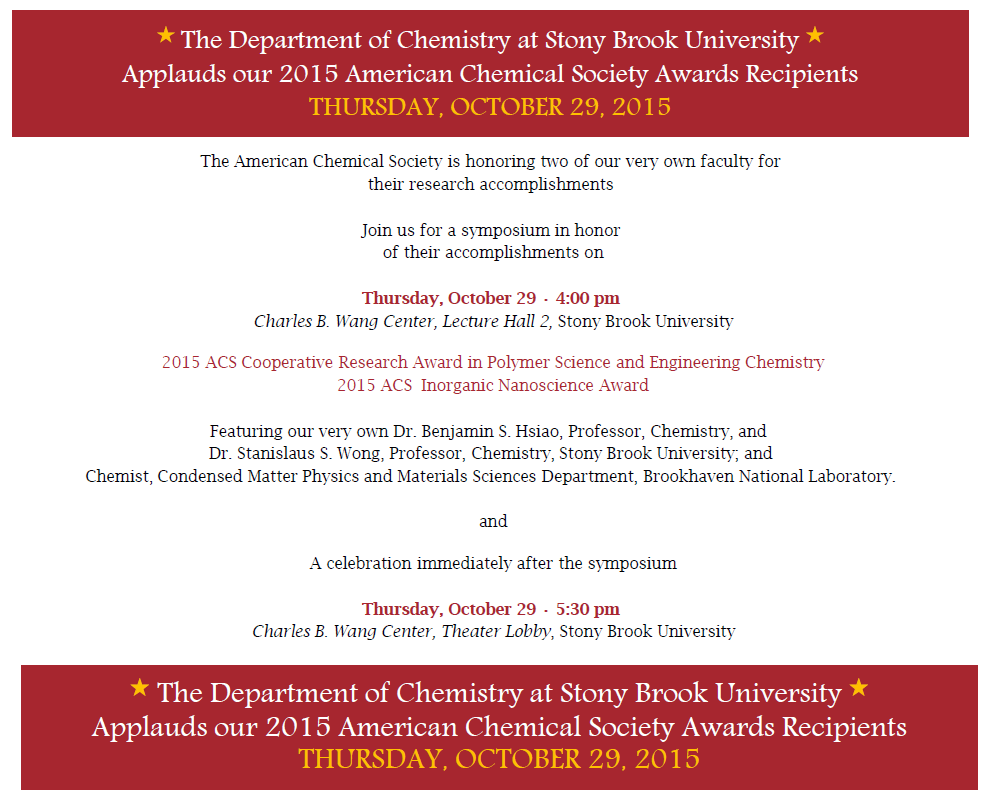 Meet Robert Palomino: 'Give Everything a Shot!'

SBU Postdoc Spotlight (Thursday, September 17, from 9:00am-12:30pm in the Wang Center Theater). Talks in particular from postdocs in Chemistry:

Dominique Williams will present on Nitric oxide to the Rescue: A Small Molecule vs. the Bacterial Invasion.

Melanie Reber will present on her work on Combining ultrafast with ultra­sensitive: a new technique for understanding energy transfer in molecules.

Congratulations to the "Chemistry Solutions" team on winning the 2015 Spring "Walk to Win" competition. Read more

This event, held on June 5 th and 6 th in honor of Professor Iwao Ojima’s 70 th Birthday, was a spectacular success! With 230 registered attendees, 130 guests for the banquet, and 30 Ojima Laboratory Alumni Speakers.

It is difficult to imagine a more fitting way to honor Professor Ojima on his milestone birthday and to showcase the extraordinary impact he has made, both in the pioneering science he developed and in the many students whose talents he cultivated and who are now making their own marks in so many fields.

Special features of the event included a fascinating panel discussion of alternate career paths from seven successful Ojima alumni. An extensive poster session highlighted contributions from alumni, current students and faculty, and even from the students of several alumni who are now professors themselves. In addition, the presentation of an impressive volume of 34 Dedicated Articles from esteemed colleagues and alumni was another manifestation of the respect and prestige Professor Ojima has attained. A second volume is in preparation to include the numerous articles received since the original publication date and others still expected.

It was particularly touching to witness the delight with which so many former classmates and colleagues reconnected with each other, often after many years of separation. There was a sense of camaraderie and unity throughout the symposium, as three decades of Ojima Laboratory members were reunited. Two receptions and a gala Banquet provided many opportunities to socialize, reminisce, and “catch up” with old friends.

Not only was it a "Grand Reunion" of the Ojima Lab Family, but also an impressive scholarly event. The high quality and diversity of presentations from alumni clearly demonstrated the long tradition of excellence that characterizes the Ojima Laboratory and Stony Brook Chemistry and of which we can all be proud.

This ambitious project would not have been possible without the support of a group of corporate sponsors: ImmunoGen; Crystal Brook, M. I..; Central Glass Co.; Kimberly-Clark Corp; Merck Research Laboratories; Ajinomoto Pharmaceuticals Co.; Tosoh F-Tech; Hamari Pharmaceutical Co.; Wilmer-Hale, LLC; and REATA. In addition to the many donations from individual alumni and the efforts of the current Chemistry Department staff, the grants and contributions of these companies collectively made this a truly worthwhile experience.

Here are some links to the Symposium Program and the photo gallery, respectively:

Professor Lawrence D. Ziegler is the 45th Department of Chemistry Convocation speaker on May 22, 2015.

The 2015 Franklin Award Lecture - The Department of Chemistry welcomes Dr. Lawrence Que, Jr., Regents Professor, Department of Chemistry and Center for Metals in Biocatalysis, University of Minnesota to be our distinguished speaker at the Franklin Award Lecture, on Thursday, May 7, 2015 at 4 PM in the Simons Center Auditorium. The title of his talk is "High-Valent Iron: How Nature Breaks Strong C–H Bonds."

Mike Teta was awarded with the 2015 Staff Excellence Award for the College of Arts and Sciences, a richly deserved honor! Congratulations Mike!

Stanislaus S. Wong, PhD, a Professor in the Department of Chemistry at Stony Brook University, is the 2015 recipient of the American Chemical Society (ACS) Inorganic Nanoscience Award. Sponsored by the University of South Carolina NanoCenter, the annual award recognizes “sustained excellence, dedication, and preservation in research in the area of inorganic nanoscience.”- Read more

A new mathematical model that uses drug-target kinetics to predict how drugs work in vivo may provide a foundation to improve drug discovery, which is frequently hampered by the inability to predict effective doses of drugs. The discovery by Peter Tonge, a Professor of Chemistry and Radiology, and Director of Infectious Disease Research at the Institute for Chemical Biology and Drug Discovery (ICB & DD) at Stony Brook University, along with collaborators at Stony Brook University and AstraZeneca, is published advanced online in Nature Chemical Biology . Read more

Congratulations, Brianna! President's Award for Excellence in Teaching by a Graduate Student 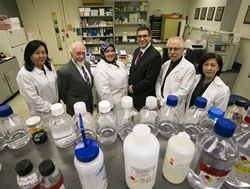 Traverse Biosciences has signed an exclusive, worldwide license agreement with the Research Foundation for the State University of New York to develop a drug to treat canine periodontal disease. The potential therapy would fulfill an unmet medical need, as periodontitis affects approximately 80 percent of dogs by the age of three and leads to tooth loss. The drug candidate comes from a discovery by Stony Brook University scientists who have developed a library of proprietary agents designed to treat inflammation. Read more

Each year the faculty members of the Department of Chemistry select an outstanding chemistry major who has completed his or her junior year to receive the Emerson Award. We are pleased to announce that Ms. Lidor Foguel and Mr. Stephen Grant are the recipients of the 2014 Emerson Award, in recognition of their solid academic performance through the academic year 2013-2014. The award is named for the late Professor George Emerson, a member of our faculty from 1965-1969.

Attached to the Emerson Award is the Lap Chan Scholarship, made possible by Dr. Lap S. Chan, who graduated from our program in 1980, and who has generously endowed a scholarship fund for deserving undergraduate majors. Stephen and Lidor will each receive $1000.

Congratulations to Stephen and Lidor for receiving this recognition, and best wishes for your continued success as students of chemistry!

Mr. Kevin Abraham has been selected as the recipient of the 2014 Sei Sujishi prize. This prize consists of a certificate and a monetary award of $1,000, both of which will be presented to him at the Undergraduate Recognition Award ceremony in the Spring 2015 semester.

The Sei Sujishi Prize is funded by an endowment established in 1994 by family members and friends of the late chemistry professor Sei Sujishi, who taught freshman chemistry effectively for many years. The winner is determined by vote of the faculty involved in the teaching of our freshman courses, the winner being the student who concluded his or her freshman year with the most consistent outstanding performance in both classroom and laboratory.

Mr. Abraham is the twenty-second recipient of this prize.

Benjamin Hsiao, PhD, Professor in the Department of Chemistry, Affiliated Professor in Materials Science & Engineering, and Co-Founding Director of the Innovative Global Energy Solutions Center at Stony Brook University, has been selected as a Fellow of the Materials Research Society (MRS). He will be recognized with this distinction at the MRS annual meeting in April in San Francisco. Read more.

Dr. CV Krishnan will receive a public award "Brihaspathi" for his contributions to science, and science education by serving as a High School Teacher, University Professor, and Communicator of Science to the public This ceremony will acknowledge his enthusiastic contributions to scientific research, chemical education, teaching of high school students, college students, and teachers studying for their Master’s degree, enriching K-6 children and their parents with hands-on science activities, enhancing teachers by offering enrichment courses, and communicating the wonders of science to the public through his “Magic of Chemistry” demonstration shows for more than four decades. The celebration, “Garimâ Pranathi” or “Saluting the Greatness of a Teacher” is scheduled for Saturday, 17th January, 2015 at Kausthubham Auditorium, Thrissur, India. Read more.

In the Lab and on the Water, Stephen Grant ’15 is Driven to Succeed