STONY BROOK, N.Y., December 16, 2014 – Iwao Ojima, PhD, SUNY Distinguished Professor in the Department of Chemistry, and Director of the Institute of Chemical Biology & Drug Discovery (ICB&DD) at Stony Brook University, has been named a Fellow of the National Academy of Inventors (NAI).  Read more

Erwin London was elected Fellow of the American Association for the Advancement of Science (AAAS).

Esther Takeuchi has more patents than any American woman....

Kenneth Dill Elected to American Academy of Arts and Sciences

To our father’s colleagues and friends,

It is with great sadness that we report the passing of our father Takanobu Ishida on September 28, after a long illness. He passed away peacefully with immediate family beside him.

The Chemistry Department at Stony Brook was the focus of his life, and we thank all of his friends and colleagues throughout the years for their friendship and support.

The Department of Chemistry welcomes Dr. Daniel G. Nocera, Patterson Rockwood Professor of Energy, Department of Chemistry and Chemical Biology at Harvard University to be our distinguished speaker at our twenty-fourth annual Jacob Bigeleisen Endowed Lecture, on Friday, September 26, 2014 at 4 PM in the Simons Center Auditorium. The title of his talk is "The Artificial Leaf." The purpose of the endowment is to sponsor an annual lecture in chemistry by an internationally renowned scholar. Light refreshments will be served at 5:15 pm in the Simons Cafe. For further information, please contact the Chemistry Department at 632-7884. More information...

Congratulations to Prof. Stephen Koch for being elected Fellow of the American Chemical Society.

Hee Nam Lim, a 2013 chemistry PhD whose work with Professor Kathy Parker has resulted in three research publications and one review article, has been selected as a Reaxys Prize finalist.

Reaxys, the organic chemistry database, sponsors an annual competition for PhDs awarded in synthetic chemistry. Three winners receive awards of $2,000 each and winners and finalists receive travel awards to the 4-day Reaxys Inspiring Chemistry Conference in Grindelwald, Switzerland. The conference hosts a Symposium and a Poster Session to which all finalists are invited to contribute. Winners of the Reaxys Prizes will be announced in early July.

Stony Brook University received notification from the U.S. Department of Energy that the proposal led by renowned energy storage researcher, Esther Takeuchi, PhD, who holds a joint appointment in the Department of Chemistry and the Department of Materials Science and Engineering at Stony Brook University, and is Chief Scientist in Brookhaven National Laboratory's Global and Regional Solutions Directorate, was selected to receive a $10 million Energy Frontier Research Center (EFRC) award. Read more. 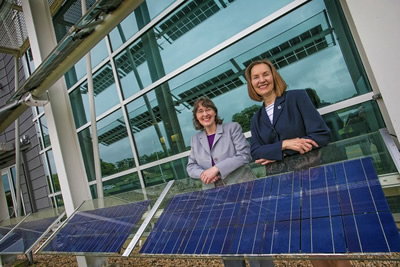 Researcher of the month - Dara Bobb-Semple.

Congratulations to Dr. Susan Oatis who just received the Provost's Outstanding Lecturer Award! This recognition is well-deserved for all that Dr. Oatis does in our undergraduate laboratories and masters program to the benefit of our students.

Two SBU professors elected into AAAS - Congratulations to Ken A. Dill, PhD, Distinguished Professor of Physics and Chemistry, and Director of the Laufer Center for Physical & Quantitative Biology, and Jules Ralph Feiffer, an artist and writer, and core faculty member of the Graduate Arts Campus. Read more.

Dr. Johnson carried out his undergraduate studies in Physics at Butler University and received his PhD from the University of California, San Diego under Professor Robert Continetti. Dr. Johnson’s research training is in structure and dynamics using mass and vibrational spectroscopy. His research endeavors address challenges in atmospheric chemistry and understanding the role of aerosol particles in climate change. 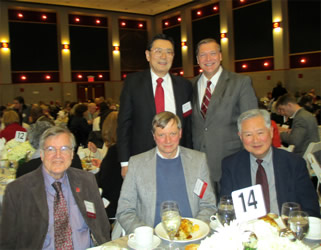