Congratulations to Profs. Kenneth Takeuchi, Jin Wang, and Stanislaus Wong for being elected Fellows of the American Association for the Advancement of Science (AAAS) and they will be honored for their contributions to science and engineering at the Fellows Forum held during the AAAS Annual Meeting on February 16, 2013 in Boston, Massachusetts. More...

University Distinguished Lectures in Science and Engineering presents Nobel Prize Winner Robert H. Grubbs, Phd "Catalysis: Green Chemicals and Materials.
Monday, October 29 at 3pm in the Student Activities Center, Ballroom B. This is free and open to the public. More...

Congratulations to our 26 semi/regional finalists and to their mentors, post docs, graduate and undergraduate students who helped them in their research. More...

Regional finalists will compete in one of six regional competitions during November with winners of the regional events earning the right to compete at the National Finals at George Washington University in Washington, DC, in early December. $500,000 in scholarships will be awarded at the National Finals, including two top prizes of $100,000 (individual and team). In previous years, grand prize winners in both individual (2009) and team categories (2001, 2007) worked with Stony Brook faculty mentors including, Carlos Simmerling and Iwao Ojima of the Department of Chemistry.

The CHE 133 Faculty and Staff are pleased to be joined by Dr. Suman Grewal. Dr. Grewal's received her Ph.D is in Organic Chemistry from Panjab University in India. She is recipient of a Howard Hughes Post Doctoral Teaching Fellowship through the Center for Science and Mathematics Education. Dr. Grewal has been a Study/Clinic Coordinator in Stony Brook's Department of Periodontology and Implant Dentistry and is about to join Dr. Helene Benveniste's research group in Anesthesiology as a Clinical Research Associate. We welcome Dr. Grewal's valuable assistance in the General Chemistry Laboratories. We thank Prof. David Hanson for bringing this opportunity to our attention.

Esther Sans Takeuchi, 2013 recipient of the E.V. Murphree Award in Industrial and Engineering Chemistry from the American Chemical Society. More...

Congratulations to Fernando O. Raineri for his project funding approval for the development of Online teaching of CHE 312. Details about the TALENT Grant may be found in the web page:
https://tlt.stonybrook.edu/FacultyServices/Talent/Pages/default.aspx

Millar, a chemistry professor at the State University of New York, Stony Brook, passed away untimely at age 64 from an apparent heart attack in February 2011. Her chemistry friends, students, classmates, and colleagues, including her husband, SUNY Stony Brook chemistry professor Stephen A. Koch, gathered here in Philadelphia at the ACS meeting to pay homage to her during a symposium in the Division of Inorganic Chemistry on metalloenzymes and their functions. More... 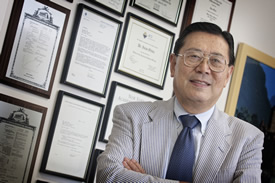 Dr. Ojima , a Distinguished Professor and Director of the Institute of Chemical Biology and Drug Discovery at Stony Brook, will be awarded the 2013 ACS Award for Creative Work in Fluorine Chemistry at the Spring American Chemical Society Meeting in New Orleans, Louisiana, April 7-11, 2013, and will also present the award address at the Biennial Winter Fluorine Conference in St. Pete Beach, Florida, January 13-18, 2013. The award consists of $5,000 and a certificate. 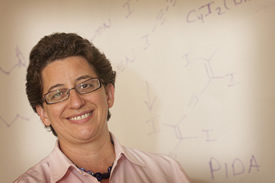 Dr. Goroff , an Associate Professor in the Department of Chemistry at Stony Brook, will receive the 2013 ACS Award for Creative Research and Applications of Iodine Chemistry at the Spring American Chemical Society Meeting in New Orleans, Louisiana, April 7-11, 2013, at which she will present an award address. The award consists of $10,000 and a certificate.

“Stony Brook University is extremely proud to have two renowned Chemistry professors receiving these prestigious awards,” said Stony Brook University President Samuel L. Stanley Jr., MD. “Iwao Ojima and Nancy Goroff are truly deserving of this recognition from the world’s largest scientific society. Their contributions, leadership, quality of research, dedication and professionalism are valued assets and resources to the institution. On behalf of Stony Brook University, I congratulate them on this well-deserved honor.”

Dr. Ojima will receive the ACS award “for his outstanding contributions to fluorine chemistry through his pioneering and creative research in synthetic methodology and biomedical applications.”

Dr. Ojima’s research, a combination of both transition metal catalysis and medicinal chemistry, has had a profound impact on the fluorine chemistry at the biomedical interface. This is his third ACS National Award in addition to the Arthur C. Cope Scholar Award (organic chemistry) in 1994 and the E. B. Hershberg Award (medicinal chemistry) in 2001, illuminating the exceptional breadth and excellence in his research.

The element fluorine plays an important role in our everyday lives as a component of common substances such as toothpaste, Teflon, coolants, air conditioners, air sprays, extinguishers, as well as pharmaceutical drugs. Today, enormous numbers of synthetic fluorine-containing compounds have been widely used in a variety of fields because the incorporation of fluorine atoms or fluorinated groups often furnishes quite unique properties to molecules, which cannot be attained by any other elements.

Dr. Ojima first introduced catalytic processes into organofluorine chemistry in the early 1980s, and developed highly-efficient methods for the practical synthesis of optically active fluoro-amino acids by means of catalysis and enzymatic resolution. His invention of a highly efficient process for the synthesis of 5-trifluoromethyluracil was commercialized for the production of trifluridine (antiviral drug). He developed successful fluorine-containing molecules for the treatment of high blood pressure and as pain killers. Most recently, he synthesized taxol derivatives containing fluorine as anticancer agents, probes of chemical and structural biology, and to enhance drug potency. “These fluoro-taxoids have been incorporated as “warheads” into tumor-targeting drug delivery systems for efficacious cancer chemotherapy,” according to Dr. Benjamin Hsiao, Vice President for Research, and former Chair of Chemistry, at Stony Brook.

Dr. Goroff will receive the ACS award for her discovery of unique molecules based on the element iodine that undergo new and unexpected reactions and which can be used to make new materials for conducting energy.

Dr. Goroff’s accomplishments “illustrate that chemistry can still surprise us and that, if we are clever, we can exploit the surprises to enrich our knowledge and to produce new chemical science,” according to Dr. Kathlyn A. Parker, Professor of Chemistry at Stony Brook.

Dr. Goroff is an organic chemist who works with carbon-rich materials. Her research involves the creation of new polymers – particularly carbon-iodine compounds – that can be used as organic semiconductors, the organic equivalent to inorganic semiconductors such as silicon.

“Organic electronic materials are useful in that they can have the processing properties of polymers and the conducting properties of semiconductors,” Dr. Goroff explained, noting that organic semiconductors can be used for electronic devices such as electronic displays, or LEDS. “They tend to be more easily dissolved in more solvents which mean they can then be put into a mold or thin film and we can shape them in ways that you can’t shape silicon or other inorganics. And because organic molecules are the molecules of life and nature, they’re a renewable resource. We’re not running out of carbon, so these materials can be less expensive and more easily modified than many inorganic materials.”

Because carbon-based polymers tend to burn, they would not replace silicon in computers, which generate heat, but they are suited for some electronic applications, she said. The carbon-iodine materials prepared in the Goroff lab push the boundaries of known polymer structure; studying their electronic and optical properties can help scientists understand the fundamental physics behind conductive organic polymers.

In addition to her research on carbon-based molecules, Dr. Goroff has had a major impact on the communication of science within the Chemistry Department and in educating society on scientific issues. Her creative and energetic leadership has enhanced graduate education in the Chemistry Department, which was recently ranked in the top 30 by the National Research Council. Most recently, she brought her chemical expertise to the NBC Learn video series in which she discussed the chemistry behind the pigmentation of flowers and the reasons why leaves change color in autumn. Videos can be viewed here and here .

MIT described Michelle Millar as: "Generous in spirit and lavish in her praise of others, Michelle was an extraordinary person".

Physics and math shed new light on biology by mapping the landscape of evolution
A team of scientists from the Chinese Academy of Sciences; Jilin University in Jilin, China; and the State University of New York at Stony Brook, led by Prof. Jin Wang, has examined some of these puzzles from a physical science prospective. More...

With her research knowledge, departmental know-how, and her expertise gained from the Dean's office as Associate Dean for Curriculum for the College of Arts and Sciences, we look forward to exciting new challenges for the Chemistry Department with her leadership.

This month's featured student is Dara Bobb-Semple, a dual Chemistry/CME major in her junior year who has been engaged in research in the laboratory of Dr. Stanislaus Wong , Department of Chemistry, for the last year on the preparation of crystalline metallic ruthenium (Ru) nanowires using an ambient template based methodology. Just recently, Dara was announced as a 2012 UNCF Merck Undergraduate Science Fellow (a national competitive award), and will be offered internship opportunities at Merck for the following summer(s). Dara's previous honors include being the recipient of a Minority Access to Research Careers (MARC) fellowship award (from the Center for Science & Math Education/CESAME); and being twice recognized for achieving a 4.0 GPA. Last summer, Dara's work in the Wong group where she works with graduate student Christopher Koenigsmann was supported through the AGEP SRI, a summer research program hosted by the Center for Inclusive Education. Dara Bobb-Semple is a member of the Collegiate Science & Technology Entry program (CSTEP), and the Louis Stokes Alliance for Minority Participation (LSAMP); and is also a member of the American Institute for Chemical Engineers and the Tau Beta Pi Honor Society. Dara is also the corresponding secretary of Stony Brook Gospel Choir and the secretary of the Essence of Praise dance group. Prior to enrolling at Stony Brook, Dara worked as a banker in Georgetown, Guyana for several years. Dara's current plans are to pursue a Ph.D. following graduation from Stony Brook. Be sure to talk to Dara at the 2012 URECA campus-wide research poster symposium on April 25th!

Past Researchers of the Month: http://www.stonybrook.edu/commcms/ureca/feature/

The Chemistry Department has just received a signed $400,000 pledge from an anonymous donor to support the newly established Graduate Chemistry Endowment. The pledge is payable over 4 years and will be matched with $400,000 from the Simons Challenge Grant once the pledge is fulfilled.

This Fund will be used to provide graduate level support for fellowships, awards, research, travel, conferences and professional development. More will follow.

Professor Iwao Ojima , Director of the Institute of Chemical Biology & Drug Discovery (ICB&DD) and a Distinguished Professor of Chemistry at Stony Brook University, recently announced a multi-year research collaboration with Sanofi, a multinational pharmaceutical company, on a potential treatment for Tuberculosis (TB) and other bacterial infections. More... 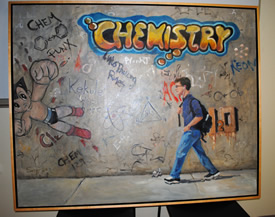 The Department of Chemistry expresses a big thank you to a prominent Long Island artist, Eileen Sanger, Prof. David Hanson, and Mrs. Colleen Hanson for their generous donation of the piece of art entitled "Chemistry Graffiti" for display in our Atrium Lobby. (photo right)

Four Stony Brook University professors – Ben Hsiao, Lorna Role, Peter Stephens and George Sterman – have been elected fellows of the American Association for the Advancement of Science (AAAS) and will be honored for their contributions to science at the February 18, 2012, Fellows Forum during the AAAS Annual Meeting in Vancouver, British Columbia. More...

The 2012 Intel Science Talent Search Competition semifinalists were announced yesterday and we are proud to have 8 Semifinalists. Congratulations to these students and to their mentors.