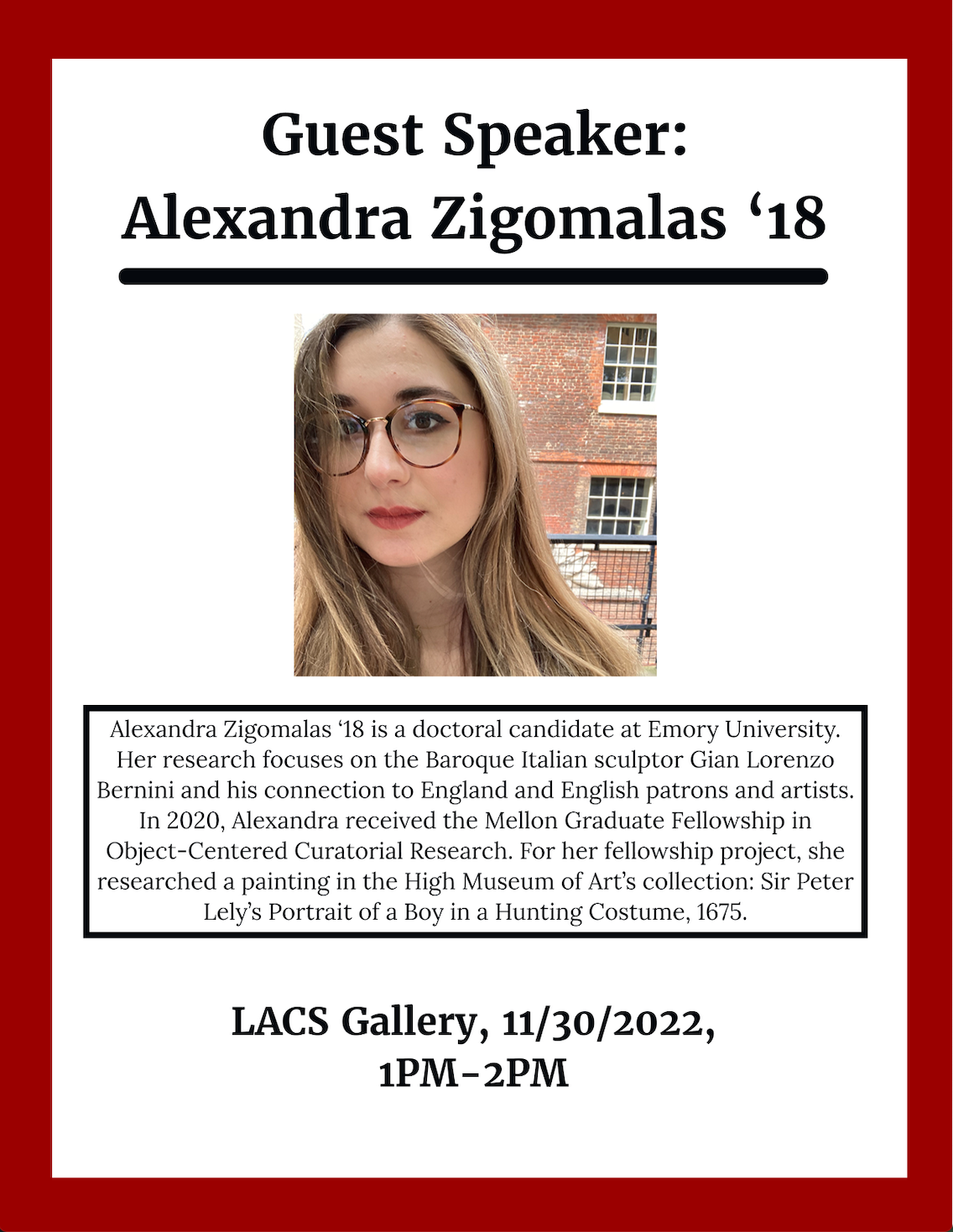 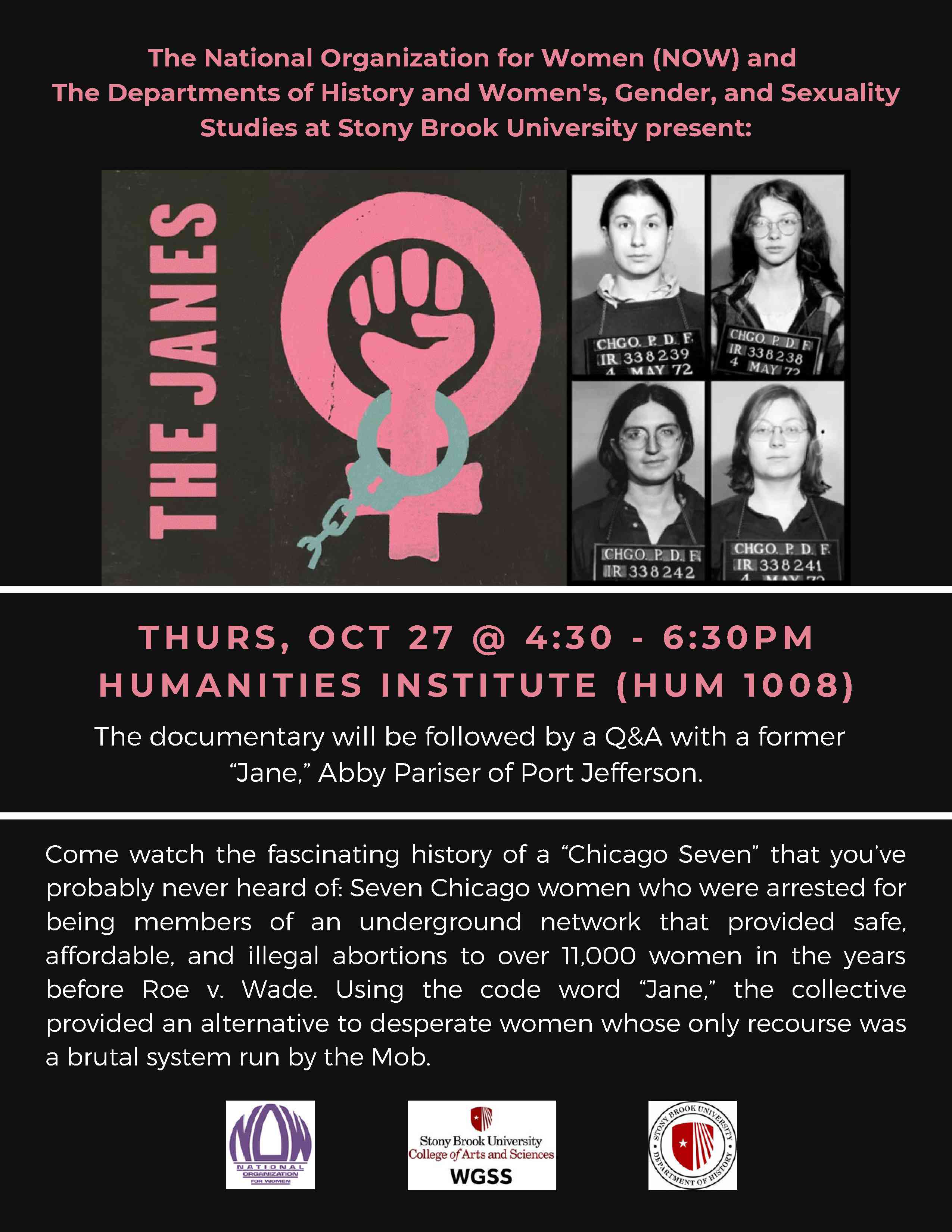 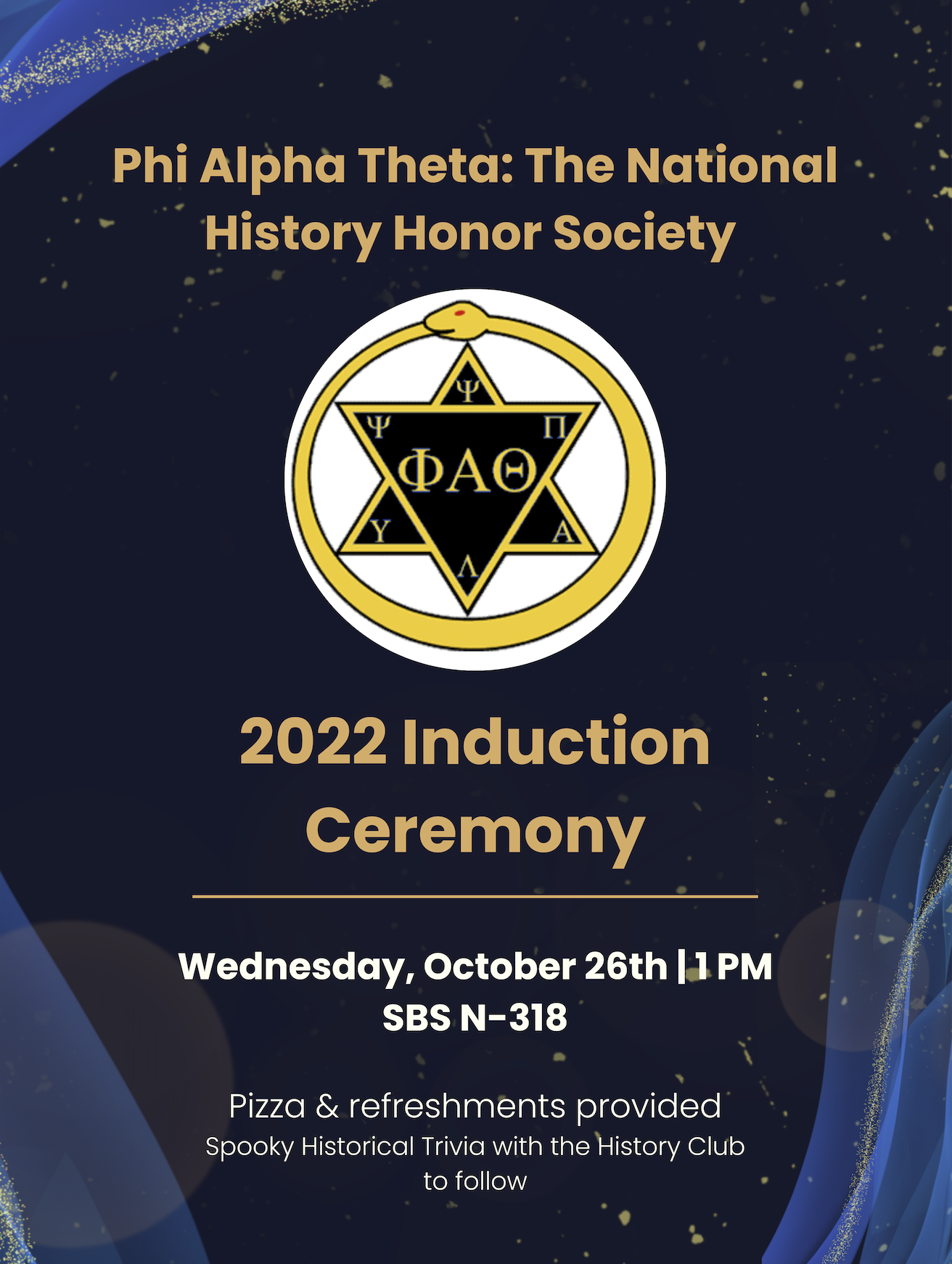 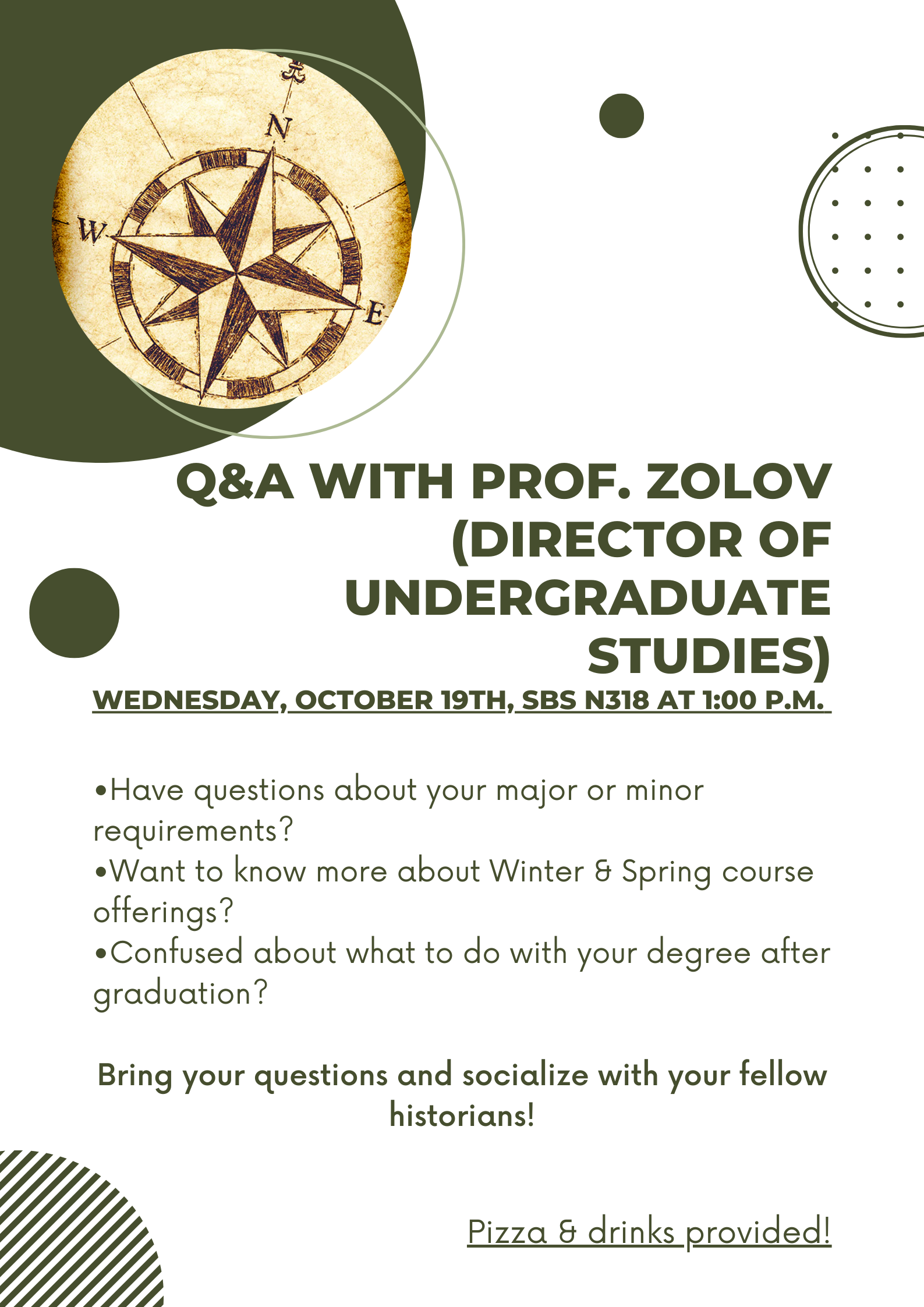 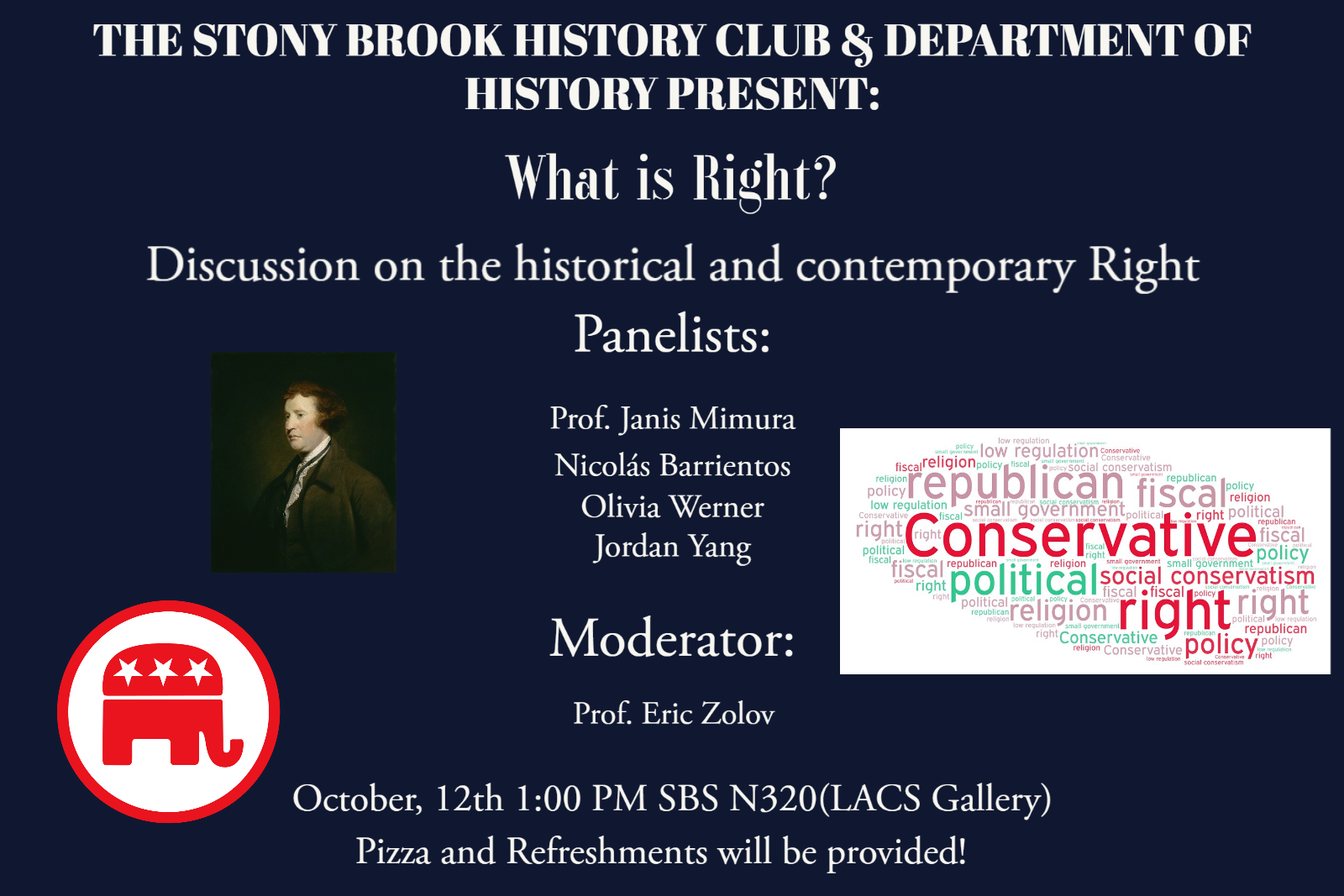 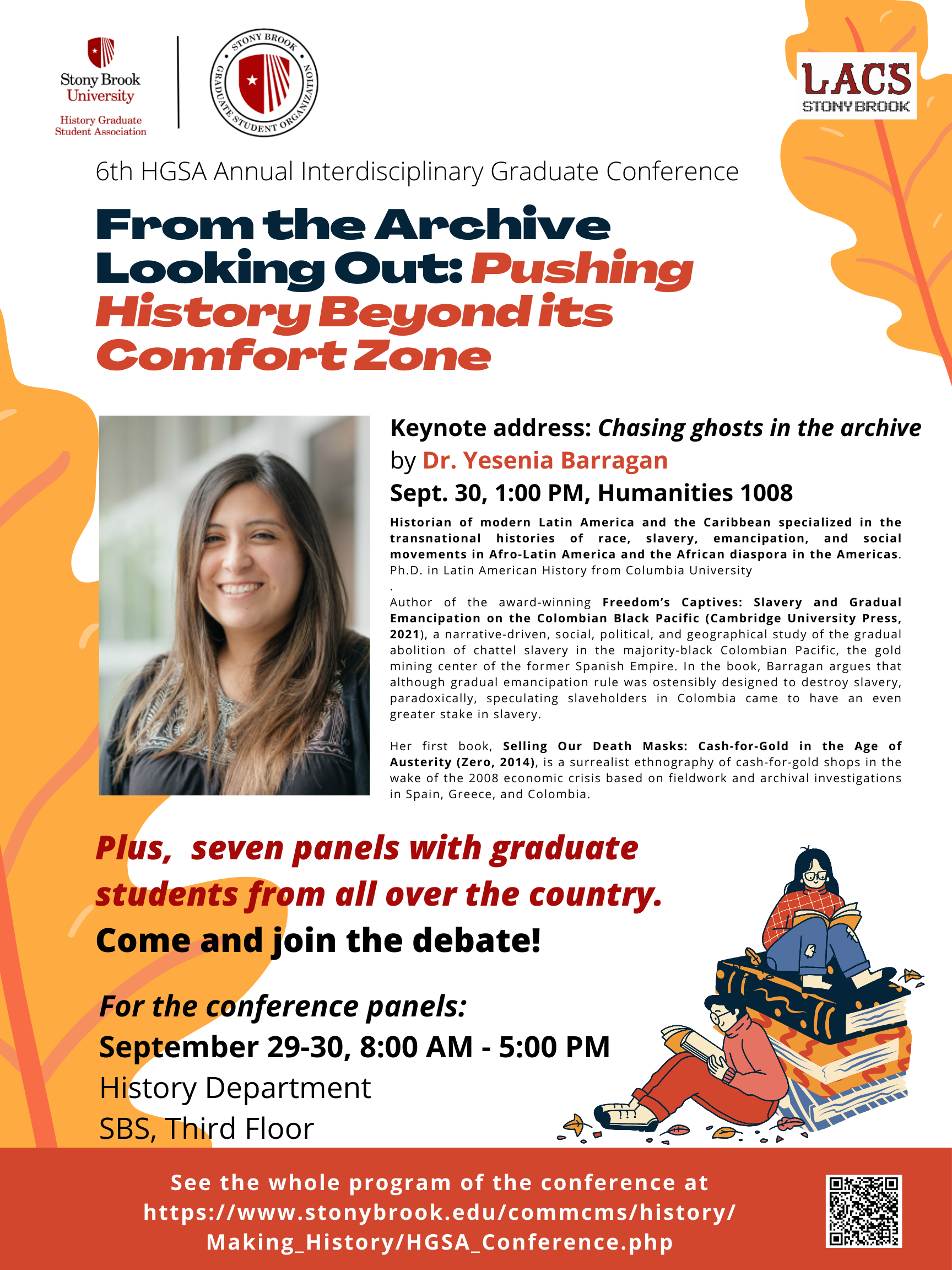 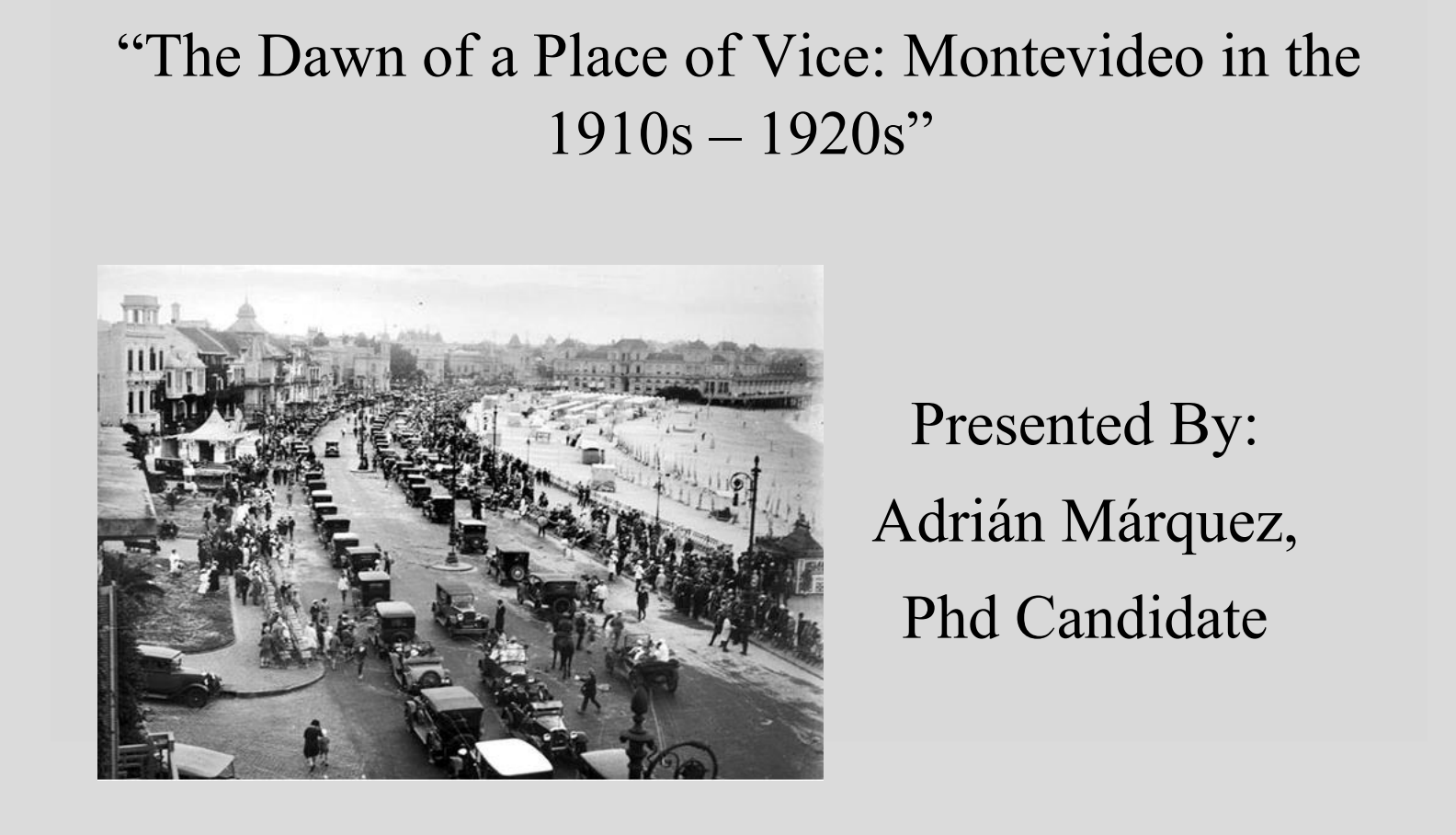 The History Department Colloquium presents Adrián Márquez (PhD Candidate).  Join us online on September 28th at 1:00 P.M. EST for the presentation of "The Dawn of a Place of Vice: Montevidea in the 1920s-1920s." To access the event click here or contact Karl Nyckelymore. 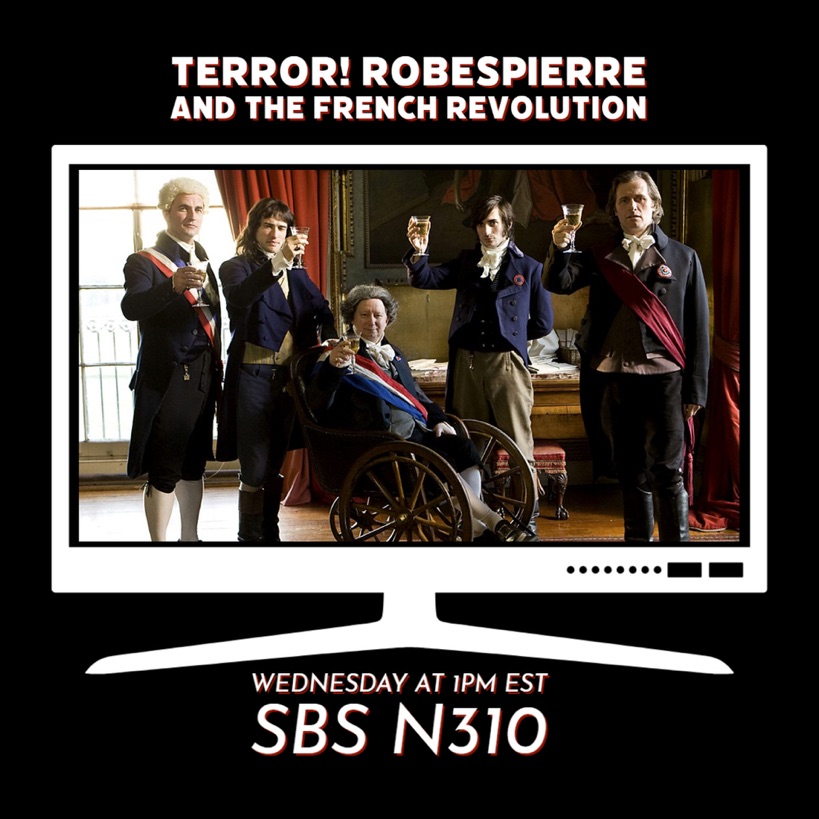 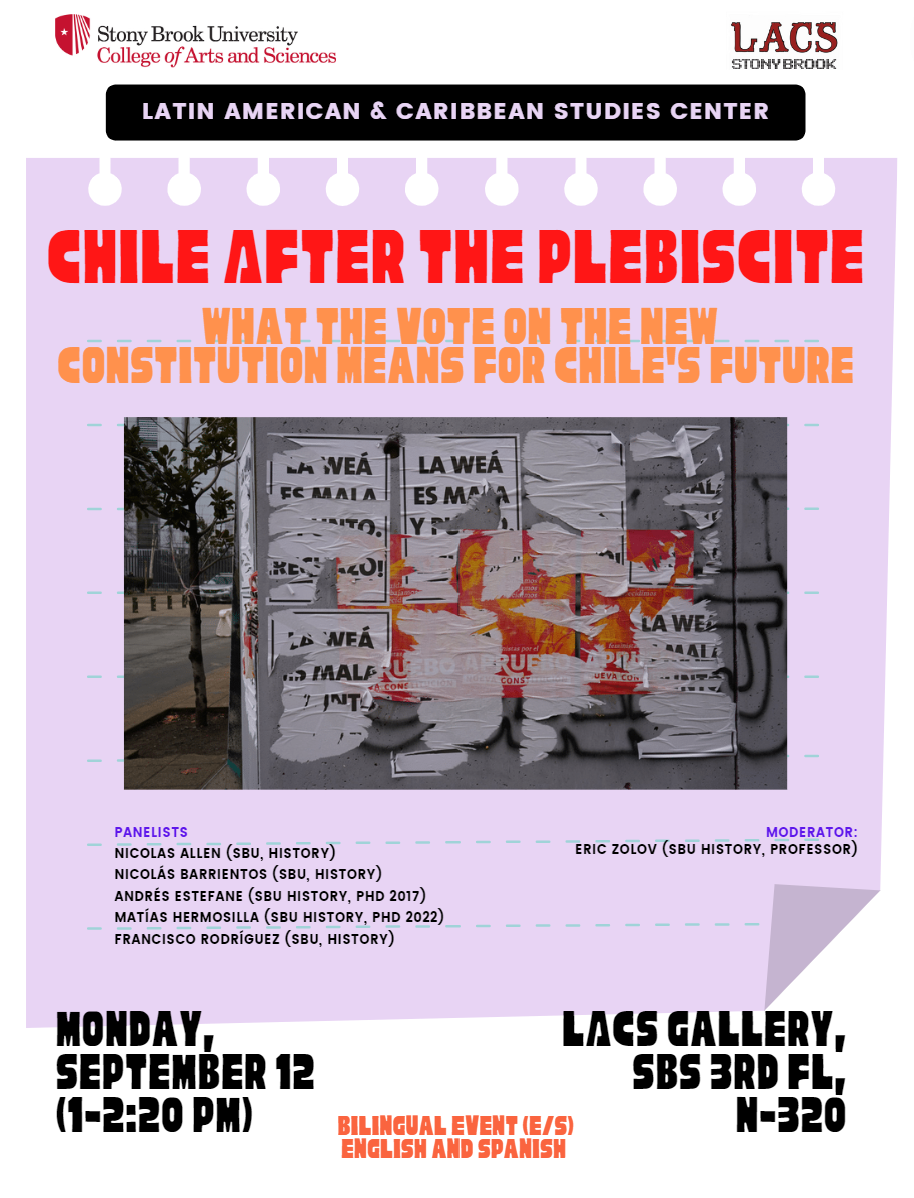 Congratulations to all who participated in "Chile After the Plebiscite: What the Vote on the New Constitution Means for Chile's Future." The bilinguial discussion panel was hosted by the Latin American and Caribbean Studies Center and moderated by Professor Eric Zolov. Keep up with all LACS events HERE. 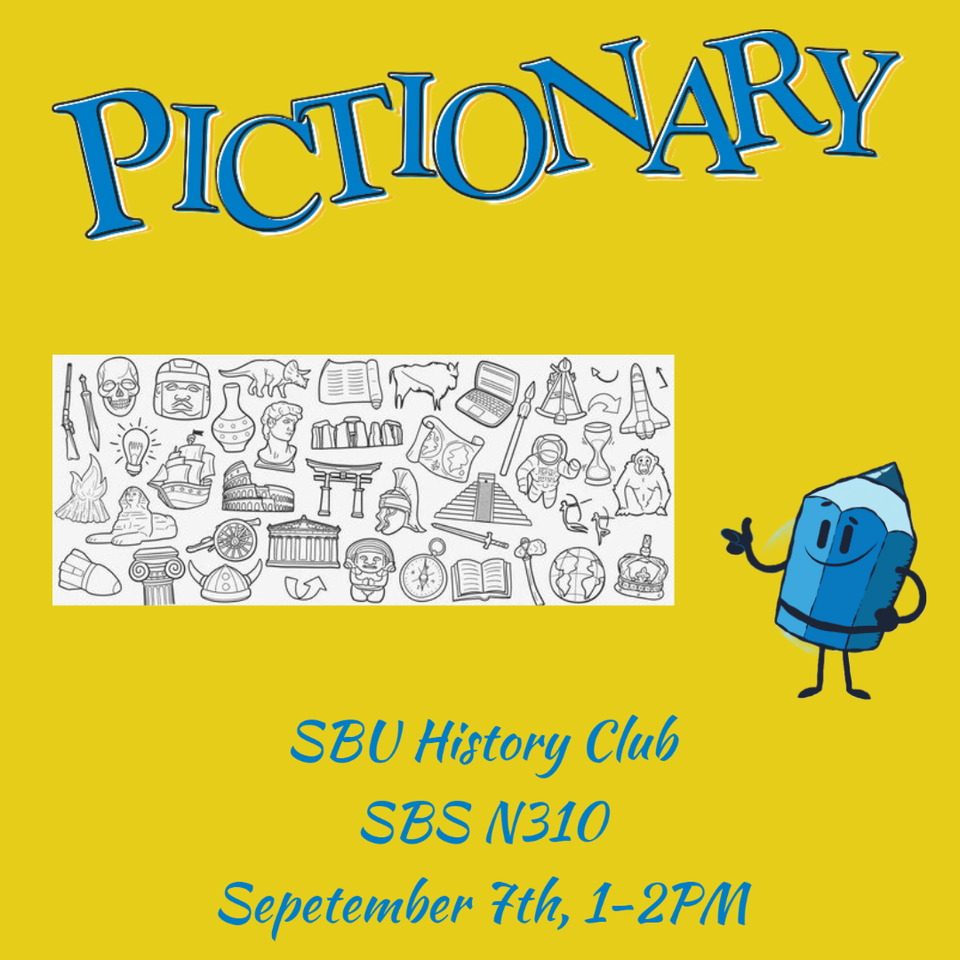 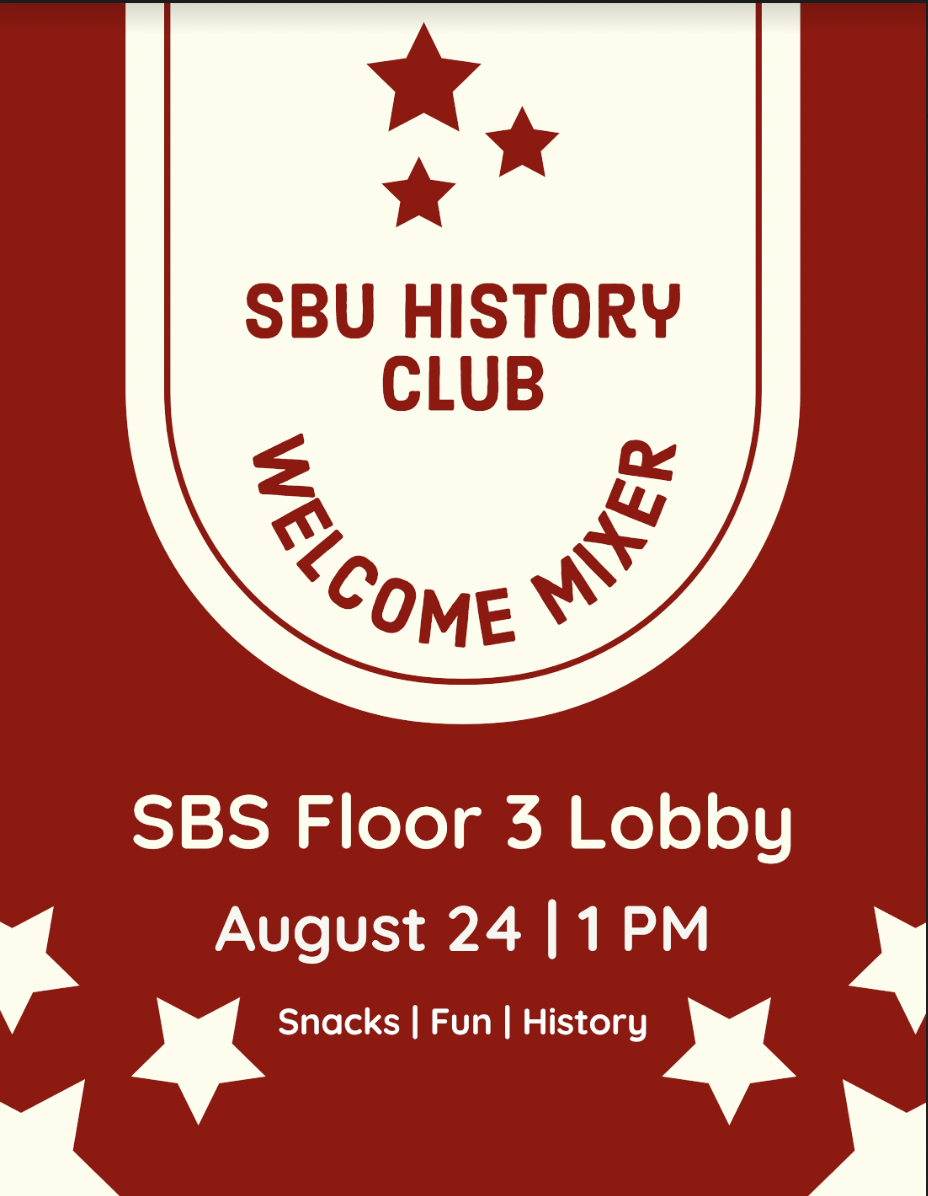 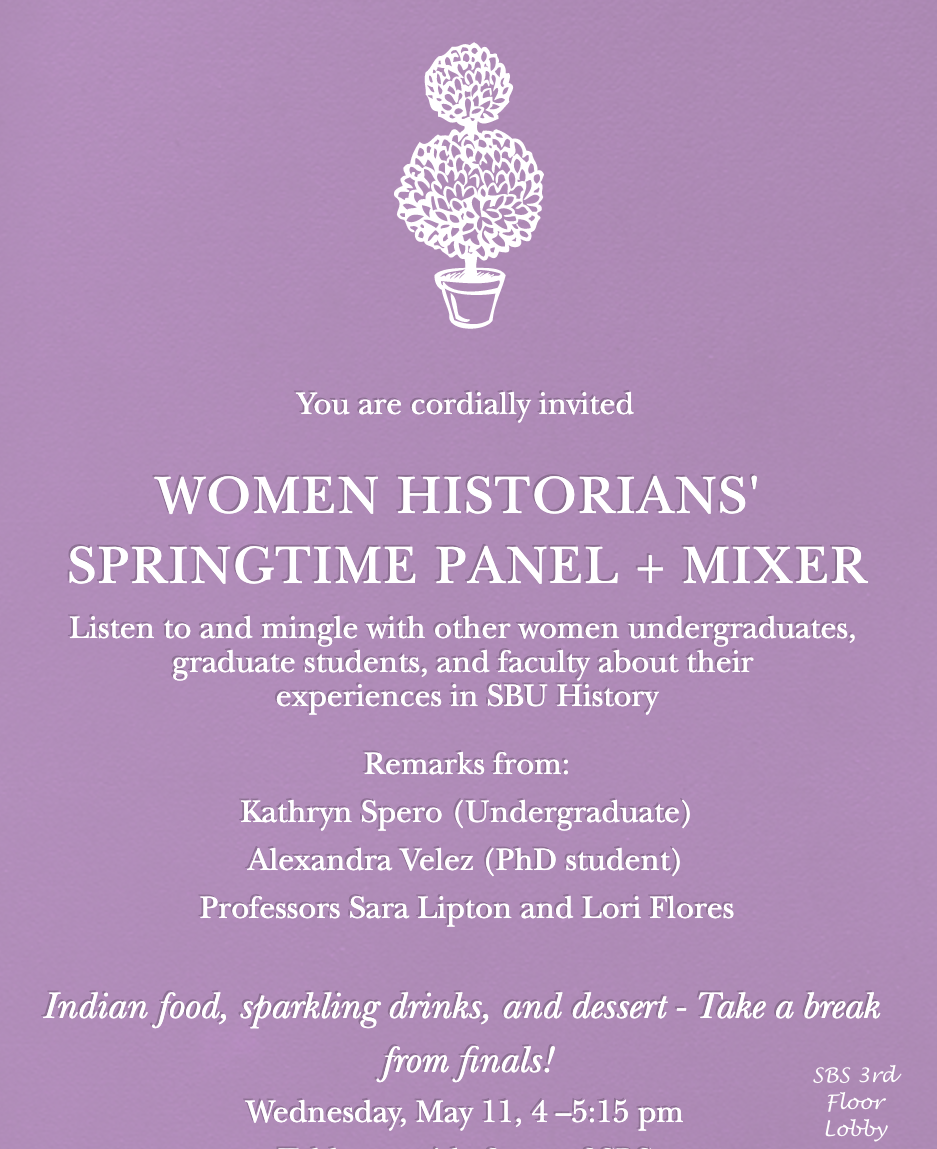 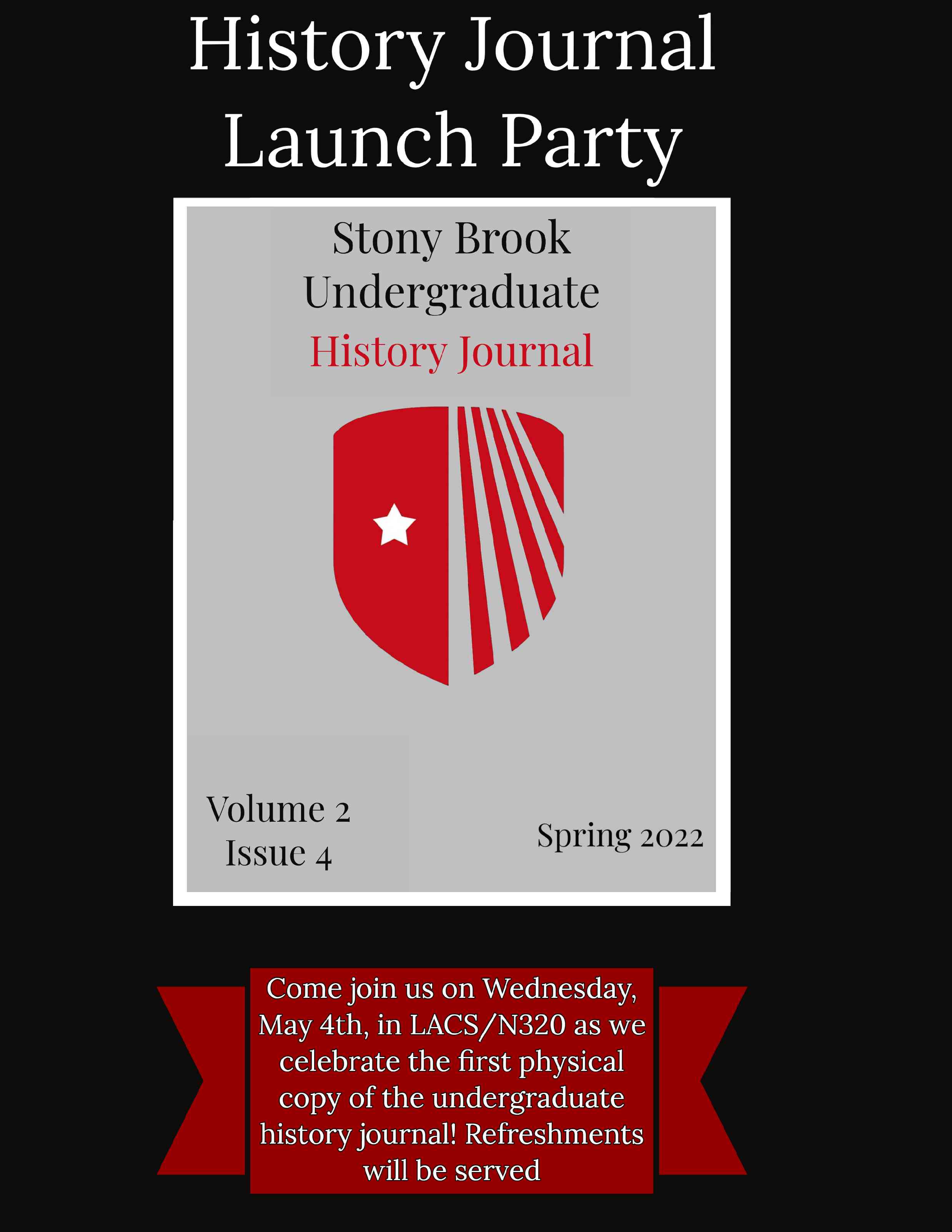 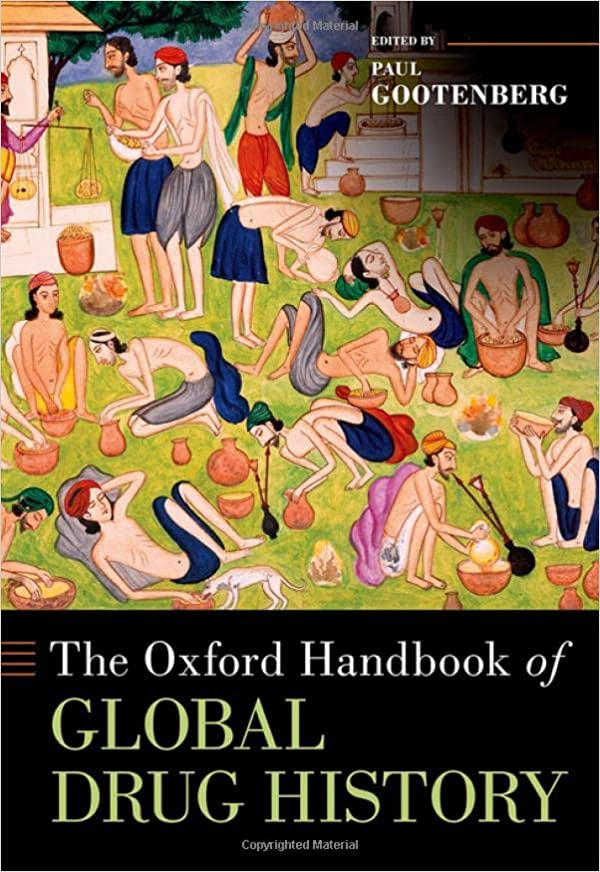 Presented by the Institute of Globalization Studies 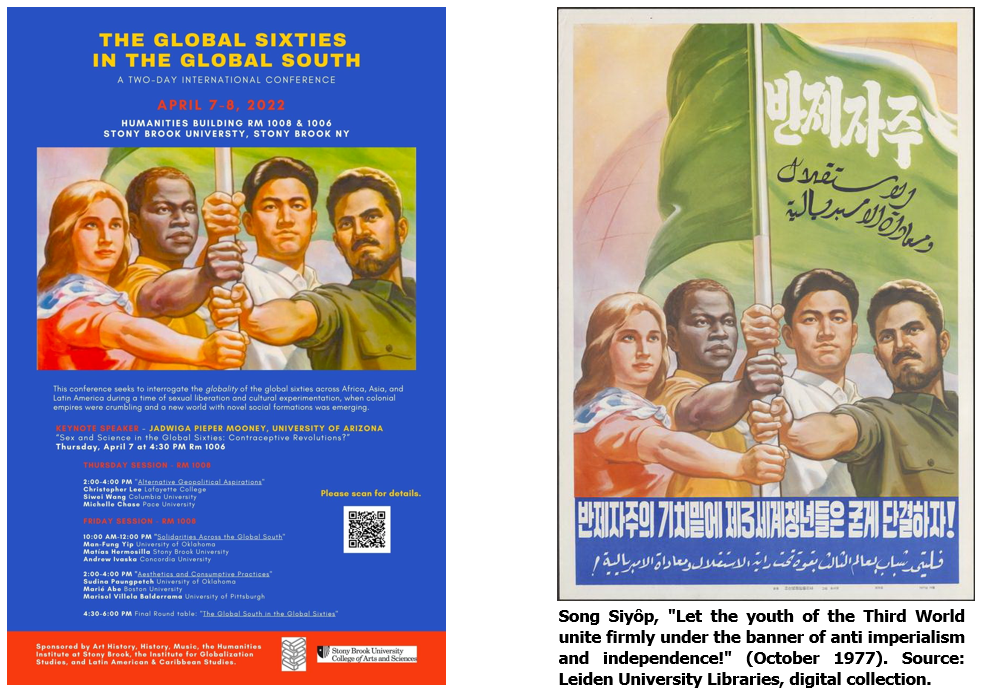 See below for the full details of the panels, speakers and events:

“The Geography of Afro-Asia: The Production of Space after Bandung”

This talk takes "Afro-Asia" as an actual geography rather than simply as an imagined designation for proponents of Afro-Asianism after the 1955 Bandung Conference. It looks specifically at how conferences, political exiles, and periodicals sought to challenge the normative geographies of Africa, Asia, and the nation-state paradigm.

Christopher J. Lee is an Associate Professor of History and Africana Studies at Lafayette College in Easton, Pennsylvania. He has published seven books on different aspects of twentieth-century decolonization and its aftermaths.

This presentation examines how a gendered perspective of the Cuban Revolution was translated through the performance of Cañaveral (Cane Field, 1950), a Cuban play performed in China in 1962.  Chinese dramatists created a different representation of the Cuban Revolution by focusing on female peasants.  This emphasis challenged gendered relationships expressed in the original version and exposed the gendered division of labor unfolding within the revolution.

Siwei Wang is a Ph.D. Candidate in the Department of East Asian Languages and Cultures at Columbia University. Her dissertation examines the translingual practice between China and Cuba in the 1960s.

“The Heroic Example of the Vietnamese Woman: Gender and Solidarity in Cuba’s Era of the Tricontinental”

From the mid-1960s to mid-1970s, state leaders, artists, journalists, and mass organizations spread a glorified vision of the “heroic Vietnamese woman” as a model for Cuba’s own New Woman and even, perhaps, for Cuba’s New Man. This talk will analyze this influential symbol and reconstruct the individuals, groups, and transnational circuits that disseminated it.

Michelle Chase is Associate Professor of History at Pace University. She is the author of Revolution within the Revolution: Women and Gender Politics in Cuba, 1952-1962 (2015) and the co-editor of the January 2020 issue of Radical History Review titled “Revolutionary Positions: Sexuality and Gender in Cuba and Beyond.”

“Sex and Science in the Global Sixties: Contraceptive Revolutions?”

Jadwiga E. Pieper Mooney is Associate Professor in the Department of History, Chair of the Executive Council of Latin American Studies, and Affiliate Faculty of the Department of Gender and Women’s Studies at the University of Arizona. She teaches and writes about subjects of public health, medicine, gender history, feminisms, political exile, the Cold War, the Global Sixties, and histories of censorship in the Americas. She is currently completing a monograph titled “Women, Wombs and Medical Men in Modern Chile: Lessons from a Doctor’s Journey.”

Panel-II:Solidarities Across the Global South (10am-12noon)

This presentation focuses on the films of the Democratic Republic of Vietnam (DRV) during the 1960s and beyond from a transnational socialist perspective. Areas to be explored include: the Soviet influence on DRV films and on the country's nascent film industry; the participation of DRV films and film artists in the Afro-Asian Film Festival and other film festivals in the socialist world (e.g., Moscow, Leipzig); and more broadly, the anti-colonial "solidarity" films devoted to Vietnam by Roman Karmen, Joris Ivens, Walter Heynowski and Gerhard Scheumann, and others.

Man-Fung Yip is Associate Professor of Film and Media Studies at the University of Oklahoma. He is the author of Martial Arts Cinema and Hong Kong Modernity: Aesthetics, Representation, Circulation (2017) and co-editor of American and Chinese-Language Cinemas: Examining Cultural Flows (2015) and The Cold War and Asian Cinemas (2019).  His current research is focused on the cultural Cold War in Asian cinema.

This presentation analyzes the consolidation of a transnational movement of musicians that aimed to use music to disseminate revolutionary ideas around the world.  It is focused on the “Gathering of Protest Song” in Havana, Cuba (1967), an event was attended by musicians from all over the globe epitomizing third-world countries' political and cultural vanguardism.

Matías N. Hermosilla is a Ph.D. Candidate in the Department of History at Stony Brook University. His research focuses on the history of Latin American popular culture, in particular popular music and humor in the Global 1960s.

“A Requiem for the Global Sixties?: The Paradox of Political Attachment and the Case of Dar es Salaam”

This paper uses the vantage point of Dar es Salaam, Tanzania – a mecca for 1960s political activists – to consider the uneven nature of the victories of the “Global Sixties.”  Following Tanzania’s independence in 1961, Dar es Salaam attracted an extraordinary range of leftwing exiles, from across Southern Africa and beyond.  An examination of this activist scene and its attendant itineraries reveals how the very forms of political attachment that produced the victories of the Global Sixties were also key to its losses.

Andrew Ivaska is Associate Professor of History at Concordia University in Montreal. The author of Cultured States: Youth, Gender, and Modern Style in 1960s Dar es Salaam (2011), he is currently completing a book manuscript entitled, Liberation Itineraries: Dar es Salaam, Political Exile, and the Making of the 1960s.

"Bases, Bars, and Blue Jeans: Thailand and Cultural Debates over the Vietnam War"

The talk covers a time in Thai history known as "the American Era," when the United States wielded tremendous economic, military, and cultural power in Thailand, while attempting to stem the tide of communism in Southeast Asia. As an ally and key contributor to the U.S. effort in Vietnam, Thailand underwent social changes triggered by the war, leading to debates over political reform that resonated with the world's Sixties generation.

Sudina Paungpetch is an independent scholar whose research focuses on the American influences in Thailand during the Cold War. She is a graduate of Texas A&M University.

"Listening to the Resonant Affinities between Japan and Ethiopia"

This presentation is a preliminary exploration of the phenomenon of aural apophenia—error of perception, a kind of mishearing—to theorize the potentialities of sound to confuse, allure, and bring to life imagined affinities across difference. It traces the unlikely aesthetic resonances and cultural affinities between Japan and Ethiopia through the circulation of musical sounds of enka, a sentimental popular music genre from 1950s-era Japan. By tracking the circulation of enka from Japan to Ethiopia—via Japan’s former colony Korea, where Ethiopian soldiers fought alongside UN troops during the Korean War—this paper explores how imagination conditions our hearing and the formation of affective alliances, and how these uncanny resemblances are listened to by others in return.

Marié Abe is Associate Professor of Music in the Department of Musicology and Ethnomusicology at Boston University. Her scholarship explores the intersection of sound, space, and sociality, bridging sound studies and cultural human geography.  She is the author of Resonances of Chindon-ya: Sounding Space and Sociality in Contemporary Japan (2018). Her recent projects examine the politics of sound in social movements in the contexts of anti-US military movements in Okinawa and anti-nuclear power movement in post-3.11 Japan, as well as the musical and historical affinity between Japan and Ethiopia in the 20th century. On the side, she records and performs on the accordion with various groups, including the Ethiopian jazz collective Debo Band.

This presentation follows the route of six women artists from Chile, Cuba, Guatemala, and Mexico who visited and exhibited their work in China during the first decades after the founding of the People’s Republic of China (PRC) in 1949. Their visits were part of artistic and intellectual networks that connected Asia and Latin America, such as the World Peace Council and leftist groups in Latin America advocating the reestablishment of diplomatic relations with the PRC.

Marisol Villela Balderrama is finishing her PhD in the Department of History of Art and Architecture at the University of Pittsburgh, where she researches the artistic connections between Latin America and East Asia during the postwar era. She is currently a visiting scholar at Tulane’s Stone Center for Latin American Studies.

Final Roundtable: "The Global South in the Global Sixties" (4:30-6pm)

Research interests include modern and contemporary African history and politics with a focus on Ethiopia and the Horn of Africa.  He is the author of monographs, book chapters, and articles including the coedited collection, The Horn of Africa and Italy: Colonial, Postcolonial and Transnational Cultural Encounters (2018).  His forthcoming book is Urbanizing a Nation, Modernizing a City: Addis Ababa 1941-1975.

Focuses on modern and contemporary art in East Asia. Her forthcoming book Reimagining Democracy: The Minjung Art Movement and the Birth of Contemporary Korean Art traces the multifaceted process in which a particular decolonial aesthetics of politics emerged during South Korea’s democratization. Her next project explores the global history of North Korean art and visual culture across sub-Saharan Africa and Latin America.

Researches music, sound, and politics in Southeast Asia. He is the author of Bangkok is Ringing: Sound, Protest, and Constraint (2019) and the forthcoming, Bangkok After Dark: Maurice Rocco and Cold War Global Nightlife, a history of transnational nightlife in Thailand during the American war in Vietnam.

Explores the interplay between culture, politics, and international relations in twentieth-century Latin America.  His books include The Walls of Santiago: Social Revolution and Political Aesthetics in Contemporary Chile (co-authored with Terri Gordon-Zolov [2022]), The Last Good Neighbor: Mexico in the Global Sixties (2020), and Refried Elvis: The Rise of the Mexican Counterculture (1999). 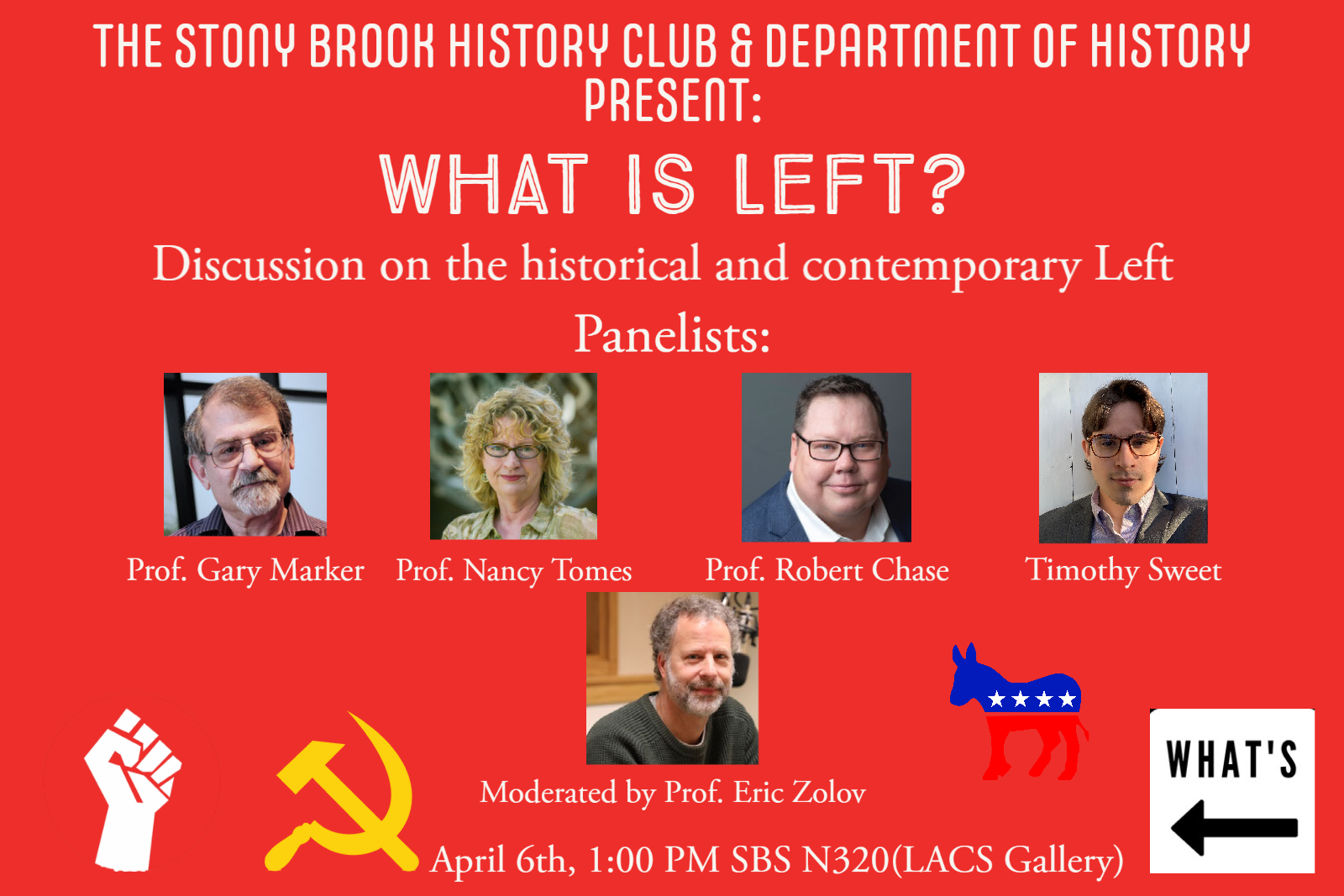 Pizza lunch and drinks for attendees! 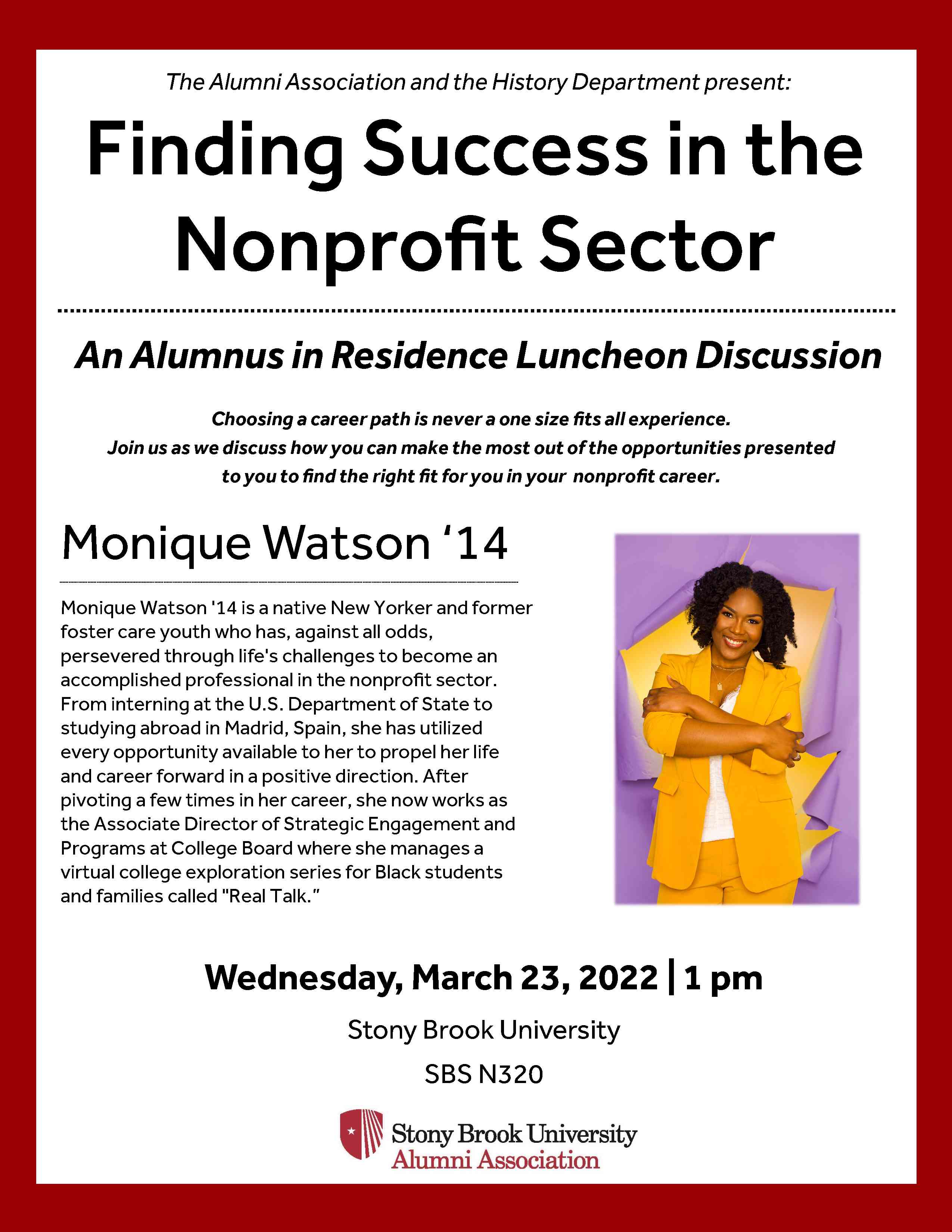 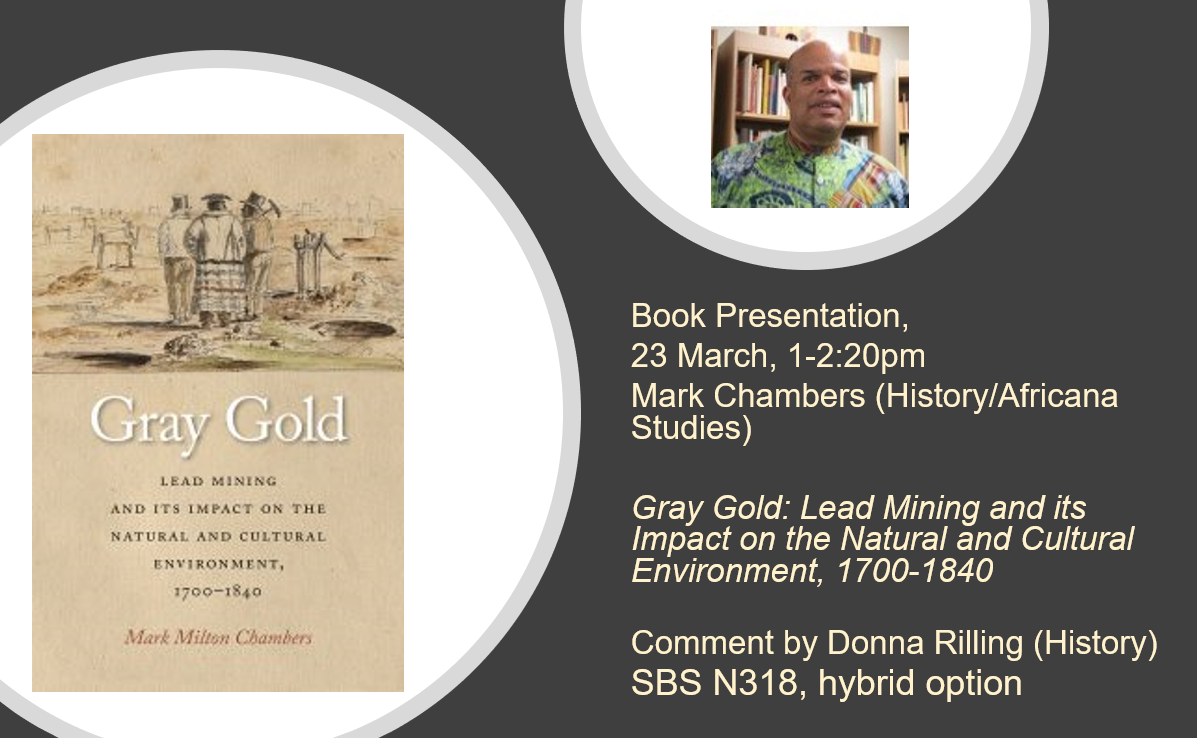 The History Department's Colloquium, scheduled for March 11th, 1:00 PM EST is presented by Will Mack. Please contact kyle.nycklemoe@stonybrook.edu for the zoom link. 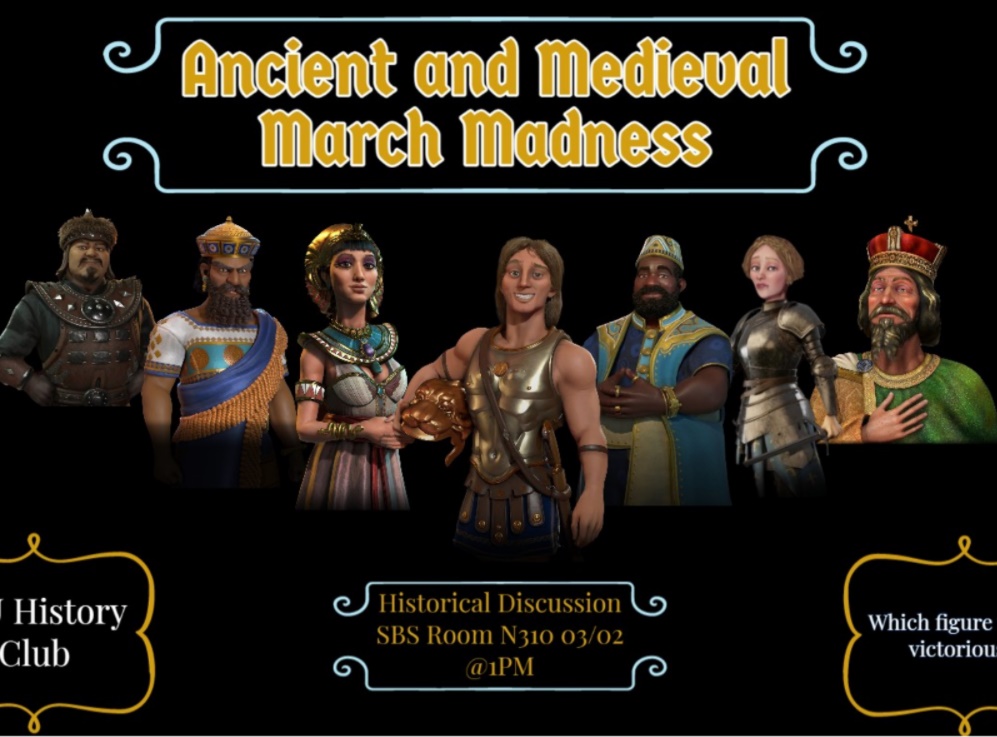 In honor of Black History Month, the History Club will be leading a discussion following a screening of the documentary The Two Killings of Sam Cooke, on February 16th at 1pm in N310 of SBS.  Known as "the King of Soul," Sam Cooke was also a committed civil rights advocate who used his influence to promote the cause of justice and equality.

• Lecture series: "Africans in India: From Slaves to Generals and Rulers"

• Conference: "From the Color Line to the Carceral State"