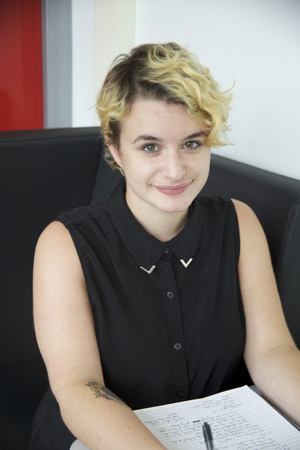 Ashley Barry is a double major in English and Women’s, Gender and Sexuality Studies, and a participant in the 2017 URECA Summer research program.  She has spent the past 2 and a half months watching scary movies, reading theory, and immersing herself in scholarly research for her senior thesis project on: “Feminine Fear: Affect Theory and Horror Films in the Twenty-first Century.” The project developed out of a paper Ashley wrote for a class on Transnational Feminism taught by Prof. Joy Schaefer where Ashley analyzed the film, The Babadook. For her senior thesis, supervised by Prof Justin Johnson (English Department), Ashley plans to focus on four 21 st Century films: The Babadook, The Witch, Antichrist, and Dark Water, analyzing them through the lens of Affect Theory.  Unfazed by the prospect of writing such a big paper, Ashley rather sees the senior thesis as a great opportunity for self expression:  “I’m really very excited about doing the thesis. I’ve been in this stage of putting all the ideas together, and learning from a ton of other people… with the thesis, I’ll be able to say: 'Okay, this is what I’ve learned. Here are my ideas, here’s my contribution'  — just putting that into words is very exciting!”

Last April, Ashley gave a talk at the SUNY Undergraduate Research Conference (SURC East) at Suffolk County Community College, on “Teaching Hatchet and Masculinity.” This fall, she will be taking a graduate seminar class on Affect Theory with Prof. Susan Scheckel (English Department), and plans to apply to Ph.D. programs in English/Women’s Studies.

To give a student perspective on URECA and the value of undergraduate research experiences in the humanities, Ashley volunteered this past July to talk with high school students participating in the Pre-College Summer Institute offered through the College of Arts & Sciences (CAS). Ashley has also been involved as a Teaching Assistant for EGL204, completed the Social Justice League certificate program, and is currently a tutor at the Writing Center. She has served as Vice President of The Next Generation (an alternative sexualities social and educational club), and has interned at Planned Parenthood Hudson Peconic. Ashley has also been involved as a Steering Committee member of the Long Island Unity Collaborative. Ashley is from Centereach NY, attended Centereach HS, and is a first generation college student. Below are excerpts from her interview with Karen Kernan, URECA Director.

Karen.  What project are you working on?

Ashley. My English honors thesis project is on Feminine Fear: Affect Theory and Horror Films in the Twenty-first Century. It came out of a class that I took a couple of years ago in Transnational Feminism and Film taught by Prof. Joy Schaefer. I’m expanding on work I did for that class, where I analyzed Jennifer Kent’s film, The Babadook. It's about a single mother coping with the death of her husband and the father of her child when this monster appears in their house. I had used Affect theory in my analysis to demonstrate how issues such as mental illness and the burden of motherhood are interrogated in the film. I looked at how the main character’s fear is shaped by her existence as a woman, as a single mother, as a widow … and this project has since blossomed into a larger interdisciplinary project for my senior thesis that will be using film, literary analysis and women’s studies to understand the affective workings of fear in media and its real-world implications.

Affect theory is perfectly suited to understand the proliferate world of horror films, as its feminist methodologies are calibrated to analyze the way an emotional experience is transmitted. This feeling of fear, of never being able to completely understand your environment or how to function that affect becomes the basis for these horror movies, and offers rich ground for analysis.

It sounds as though that class gave you a strong foundation to develop this topic.
Definitely. And this fall, I’ll be taking a doctoral seminar course on Affect theory with Dr. Susan Scheckel. She invited me to enroll in the class. I’m so excited about that! ... The Affect theory stuff is awesome. I really like reading Sara Ahmed, Kathleen Stewart …plus Joy Schaefer, my professor from that class I took, who has written a lot on Hitchcock. And I love being able to understand and explain it through its application to narrative films.  Affect is the way we experience emotion and feeling before we can really label it. I like to describe it as a vibe or an energy –for example when you pick up on the way the air feels when you enter a room, the way the we’re engaging with each other,  before you can even put it into words. There’s a feeling. So that’s affect. And affect was huge in theory up until Descartes and the mind/body split. Feminist and queer theory over the last century have tried to reclaim that the body is another way to experience the world. It’s not all this rational logic. There’s a corporeal element of it, which when you ignore it, you miss out on a lot of things.

For your senior project, will you be focusing on a few films in particular?
I’m primarily planning to look at 21 st century films. The four that I‘ve narrowed down to for my senior thesis project are: The Babadook, The Witch, Antichrist, and a Japanese film called Dark Water.

Is your interest in horror films a long time interest? Or something you developed while here?
Definitely something I developed here. For most of my life, I could never watch scary movies; I’ve always hated them. I think it’s so funny that I ended up actually choosing this area to work on for my project. In Joy’s class, I started looking at this one film that I’d resisted watching before – just because it worked so well with the theory. And I discovered that the majority of films in this genre, especially the indie ones that have these cult followings, also work so well that I couldn’t resist. For me, the whole summer has been a kind of exposure therapy as I’ve been watching more films, expanding my research.  Recently, I watched a trailer for a horror movie, and I kept my eyes open the whole time which is the first time that’s ever happened in my life!

Was it helpful to have a URECA fellowship this summer?
Immensely useful. I’ve been spending my summer doing a lot of reading and then a lot of thinking-which is something you typically don’t get to do as much during the summer when you’re working. Having the freedom to just read and go wherever my mind wants to go has been absolutely amazing! And it’s been great working with my advisor from the English Department, Justin Johnston.

I’ve been able to really narrow down my list of films to the ones that I will be working on for my thesis project. And I’m going to spend August mostly writing, putting the theories that I’ve been reading and the films I’ve been watching together.

Are you daunted by the prospect of writing a thesis?
I have a ton of notes already, so right now, I feel pretty good about the thesis. If I split it down by film, it’s only 10 pages per film which I feel I could almost produce right now.  Also, as I’m reading the concepts/theory, I’m constantly referring back to the films and asking:  how does this apply to these films? That keeps me grounded in the material, focused on my specific project.
I’m really very excited about doing the thesis. I’ve been in this stage of putting all the ideas together, and learning from a ton of other people…and with the thesis, I'll be able to say: “Okay this is what I’ve learned. Here are my ideas, here’s my contribution” -- just putting that into words is very exciting!

What for you is most enjoyable about the process of doing an in-depth project?
Not just getting a cursory knowledge of a field. In a lot of classes –survey ones, and even topics courses--you have a couple of months to learn a field and try to produce something on your own. You end up reading only the very basic texts. With this project, I was able to start with that and now I’m in the nitty-gritty of it. So getting more expert knowledge of a topic as opposed to just skimming the surface is what’s valuable. And I think it will also be helpful for grad school to have had the opportunity to do in-depth research.

What are your future plans?
I want to go straight into my PhD.   I would actually love to stay here in either the English or Women’s Gender and Sexuality studies departments. The faculty at SB really get what I’m trying to do.

And I’d like to keep working with film, TV, social media. There are so many ways to tell narratives these days. And I’m really interested in that.

Have you had the opportunity to present any of your research/scholarly work?
Last spring I got to present at the SURC conference. That was on a totally different project, one that I worked on for Dr. Patricia Dunn’s young adult literature class. I wrote on the very popular novel Hatchet by Gary Paulsen and the way it presents masculinity in ways that are problematic. The moderator of the panel had done Women’s Studies at Stony Brook – and she had a ton of questions for me. Getting that experience of going back and forth, really getting interrogated on your work – it makes you feel a lot more confident at the end of the day.

Do you have any advice for other students – particularly those interested in research in the humanities?
Follow your curiosity. When something piques your interest, just go with it.  Also, for me, a lot of my work is antagonistic in that, I’ll be reading a poem or some other type of work, and I think: I have a problem with this. I’ve learned to pay attention to that voice, and to follow that line until I can find my own argument and really say something interesting and new.

How did you hear about URECA?
The English honors program has been absolutely amazing in making us aware about opportunities, professional development meetings and seminars. I was able to learn about the Fulbright scholarship…about URECA, IREP…and all the many different opportunities out there. When I first learned about the URECA summer program, I didn’t feel ready to apply yet. So I decided to hold off for a year, and it’s worked out for me. This summer has been great.