This month, we feature two seniors who are completing the requirements for an honors degree in Political Science. Both work under the mentorship of Dr. Helmut Norpoth. Both are passionate about their research topics. And both will be presenting their research in April.


Be sure to look for Sarah Eller and Kevin Rutigliano at the SUNY Undergraduate Research Conference (SURC) in Brentwood on April 21, and on campus at the annual URECA Celebration on April 26! 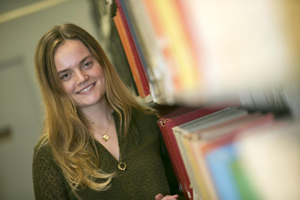 Sarah Eller  is a senior with double majors in Political Science and Africana Studies. In her sophomore year, she took  POL 318: Voters and Elections with Professor Norpoth where she wrote a paper on racial identity and party loyalty in the 2012 presidential election, a topic she has since expanded upon in her research and scholarly activities and current honors thesis work. Last year, Sarah gave a presentation at the 2016 Pi Sigma Alpha National Research Conference at George Washington University on the topic and will have her work featured in the Spring 2017 edition of Libertas, Stony Brook’s undergraduate political science journal. Sarah is the recipient of the Michael Gramer honors thesis award, and the Bliss Verdon Memorial Scholarship; and has served as a Teaching Assistant for two upper-division political science courses. This month, Sarah was announced as the first place winner for the Benjamin Scharps and David Scharps legal essay competition (SUNY). In addition, Sarah works as a student-athlete tutor and volunteers her time with a community service project she co-founded with the Africana Studies department. Since May of last year, Sarah has interned with the Suffolk County Human Rights Commission, where she was involved in the investigation of discrimination claims across Long Island. Her plans are to go to law school, after taking a gap year following graduation from Stony Brook in May.  Sarah is a first generation college student who was born in Newburgh, New York and attended Valley Central High School prior to enrolling at Stony Brook. 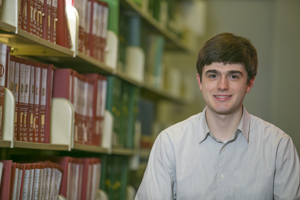 Kevin Rutigliano is a senior majoring in Political Science with a minor in Journalism. He has an avid interest in the geopolitics of East Asia and Southeast Asia, and US foreign policy and national security. His honors thesis for Political Science is on “ The Secret War in Laos: A blueprint for US intervention”: he analyzes US intervention strategies in the 1950s-1970s, and discusses US support of Hmong hill tribes to combat communist forces in Laos during the Laotian Civil war. In his thesis, Kevin draws parallels to recent strategies by the US in supporting the Kurds to combat ISIS in Iraq and Syria. Last summer, Kevin served as a legislative intern with Suffolk County Legislature 5 th district. Kevin has also been active with the Stony Brook Independent as a Blogs Editor. Kevin plans to pursue graduate study on US foreign policy, and aspires to work for the State Department overseas. Kevin was born in Beverly, Massachusetts and attended Hamilton-Wenham Regional High School prior to coming to Stony Brook.

Below are excerpts of their interview with Karen Kernan, URECA Director.

Karen. How did you first get started on your thesis topic? What intrigued you?

Sarah.  For me, it started with an assignment for  POL 318: Voters and Elections with Prof. Norpoth, where we were asked to analyze voting behavior in the 2012 election. I focused on the factors of race and partisanship. I looked into how white, black, and Hispanic voters cast their votes and what could have influenced those choices. I guess what made me really interested in that election is that we had such distinct voting behavior among racial groups. And ever since I can remember, I’ve always been sort of obsessed with understanding elections and the political psychology behind them--understanding why people do the things they do.

Kevin. I always had an interest in the topic of American’s involvement in southeast Asia. I took a course on US foreign policy (POL 336) with Prof. Norpoth in my junior year that touched on the secret war in Laos. I started to see parallels with what’s going on in Iraq, and how we’re supporting the Kurds. And I just decided that I wanted to get more into it. So I decided to do the honors thesis. .... I love it. Doing the research, getting access to presidential libraries, looking at documents/conversations that have been declassified to see what was going on behind the scenes--I really like that part of it.

What was one of the most surprising things that came up in your research?

Kevin. One interesting thing I learned more about was that there was a critical stage in 1960 when in Laos we had been supporting the royal government against the Pathet Lao (a communist movement)… and at one point, the State Department and the CIA wanted to support opposing sides within the Royal Lao Goverment. There was a lot of miscommunication.  And that left Eisenhower in a weird position. I was surprised at the extent to which these different branches of government took such different stances, under the same administration. ….Also what surprised me is that the Hmong were trained as guerrilla fighters. But as the war came on, they became really adept at conventional warfare. I saw a lot of parallels with the Kurdish fighters.

Sarah. For me, there are a couple of surprises. I was interested to find out how many voters defected (for instance, voters who identified as Republicans but voted for the Democratic candidate). I initially thought people would be loyal to their parties because they generally are. But I found that for some voters, race played a bigger factor than partisanship. For example, out of all self-identified black Republicans surveyed, nearly all of them defected and voted for President Obama. Conversely when I looked at the white vote to see how many Democrats defected, I found that many white Democrats also defected and voted for Mitt Romney. When I broke it down further by region, it turned out that there were actually more white northern Democrats who defected than white southern Democrats. That was also somewhat surprising, because it’s really contrary to what we would expect to happen.

Has it been difficult to narrow your focus to complete the project? What are the main challenges?

Kevin. Sometimes I get so caught up reading about my subject. And I’ll spend time on peripheral topics that don’t directly relate to my thesis because I love it so much. I then have to remind myself to stick to the topic, to what the thesis is about.

Sarah.  Narrowing my focus is the hardest thing for me. With the data set I’m using, there is an endless number of combinations that you can use. It sometimes takes time to figure out what is most useful for the thesis, for the bottom line.

How has your mentor helped you in this undertaking?

Sarah. Prof. Norpoth really cares. In my sophomore year, when I wasn’t sure I wanted to stay at Stony Brook,, he talked to me about some great research opportunities and encouraged me to be do an honors thesis in my senior year. He also told me about some of the scholarship opportunities, which made Stony Brook a lot more attractive. And beyond my own experience, I know that he goes out of his way to help out his students.

Kevin. I agree. He’s always giving recommendations on something that might be of interest to you, whether it’s a movie or documentary that relates to your interests, or another opportunity that might be good to follow up on. He’s always looking out for me. He wrote my recommendation letters for all the fellowship opportunities I’ve applied for. His door is always open. He always answers my emails. Just last week I kept sending him revised copies of the abstract I was submitting to SURC.

What are the main benefits of doing an honors thesis?

Sarah.  I think that the experiential learning aspect is really important. I find that I always learn better if I’m more involved—and from doing my own research, I’ve really learned a lot. Plus, I’ve made a lot of connections through my research. I was able to present at a national conference last year in Washington DC and meet other political science students and faculty from across the country . I’ve built relationships with amazing political science and Africana Studies professors who have helped me out a lot through the process as well. And it feels great to know that I’ll be graduating with a piece of writing to show this is what I’ve done, this is what I’ve accomplished.

Kevin.  What I loved about doing this is that even though I’ve always been somewhat knowledgeable on this stuff…doing the honors thesis gave me an opportunity to really try to study and learn something I’m really passionate about. It’s really awesome. I like the personal part of it. From random conversations I’ve had where I connect with people just talking about my project, to professional connections that will be useful for my career, I think it’s helped me a lot to become involved in this. To me, the thesis work shows that I am really passionate about this subject. This was a voluntary thing I did…I always tell people to do the honors thesis.

What advice would you give to other students about honors project?

Kevin. You have to find a subject you’re really passionate about. Then, it doesn’t seem like work. I mean, it is work – but you have fun while doing it. It’s really interesting. So the advice I’d give is to find a subject that you love, and just go for it!

Sarah. Just do it, even if you're on the fence about it. I think it’s such a great experience. Make sure you pick something you love. You’re going to have to read a lot and write a lot. For me also, this doesn’t feel like work. It’s a thing I’m interested in and it’s a project that I take seriously. It’s a really good experience.