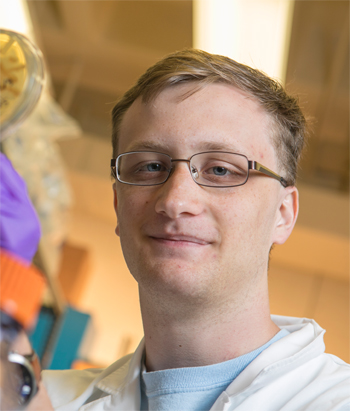 Justin Bell is the recipient of this year’s Chhabra-URECA Fellowship, an award which annually recognizes an undergraduate researcher who has a passion and talent for science. The Chhabra-URECA award provided support this past summer for Justin’s ongoing research with Dr. Michael Airola (Biochemistry & Cell Biology) on “ The Structure and Function of Lipins: The Triglyceride Synthesis pathway.” Justin has been working with his mentor since June 2016 when his mentor was a post doc at the Stony Brook Cancer Center; he stayed on with the lab when his mentor took a faculty position in the Department of Biochemistry & Cell Biology, and the lab moved from east to west campus (Life Sciences, 4th  floor).

Justin is a Biology major in the University Scholars Program (class of 2018), and plans to complete an honors thesis on his work.  Prior to beginning research, Justin recalls being uncertain about getting involved in research: “ I thought I wasn’t going to like research. I thought it was something to check off on my premed checklist but then I ended up doing it. I found I really like this. I actually want to go to lab. It wasn’t just something I was just doing for my resume anymore.”

At SB, Justin has been involved as a Teaching Assistant for General Chemistry and for Undergraduate Biology; is a member of the SB Academic Judiciary Committee; has participated in the SBU Undergraduate Clinical Experience Program, and has done Physician Shadowing via SB Medical Management. He is also an EMT-B at the Port Jefferson Volunteer Ambulance Corp.  Justin is currently applying to medical school and has an interest in both emergency medicine, and anesthesiology. Justin is from Northport, NY; his hobbies include building and flying RC model aircraft.  Below are excerpts from his interview with Karen Kernan, URECA Director.

Karen. Tell me about your research project in Dr. Airola’s lab.
Justin. As a structural biology lab, our group works towards ultimately obtaining high resolution protein crystal structures via X-Ray diffraction. We are working on a bunch of proteins in the triglyceride synthesis pathway — a pathway that’s very important for most life, but still has much to be discovered about it. I have specifically been working with a protein called Lipin, the second to last protein in that triglyceride synthesis step. Its purpose is to turn this molecule called phosphatidic acid into diacylglycerol by catalyzing a dephosphorylation reaction. We have been working with Lipins from several different species. We’re working on perfecting an activity assay in yeast. We want to see if these Lipin constructs from several different species all retain activity in the yeast Saccharomyces cerevisiae.

How did you first get involved with the lab?
I started research at the beginning of last summer. And to be honest, finding research was kind of daunting at first. I wasn’t sure how to go about it. The professors of the really large classes who I initially asked about doing research with all had full labs. But then, I started to read up on some other professors’ descriptions of their research on the Biology webpages. I emailed 5-6 of them that I was interested in and I had a couple of interviews and offers. My interview with Dr. Airola ended up going really well and I felt like we got along well. So I decided to join the Cancer Center group — I really just felt like I belonged there.

I hadn’t realized that you started in the Cancer Center.
Yes, when I started doing research, Dr. Airola was a post doc in the Cancer Center in the HSC. Then he got hired as a professor in the Dept of Biochemistry. So, I was actually working with him before he had any grad students. We were a lab of 2.  Now we’re a lab of 6 …. It was a really nice environment to start doing research, working in the Cancer Center with Dr. Hannun’s group. There was always someone around — I had a whole row of people down the bench that could help me out if I needed it. It was a good nurturing environment.
After moving to the life sciences building, it’s continued to be a great environment to learn. We all help each other out. We all build on each other’s skill sets, and take advantage of whoever knows the most about a certain topic.
And Dr. Airola is a great guy – I’m really happy to be working with him.

Did you have any prior research experience or background when you started in the lab?
No - but I found that you really learn a lot on the job. That’s how you learn the techniques. It's challenging but doable...
I thought I wasn’t going to like research, I thought it was something to check off on my premed checklist but then I ended up doing it. I found I really like this. I actually want to go to lab. It wasn’t just something I was just doing for my resume anymore.

What is it that you like about the research environment?
The fact that you’re doing something that hasn’t been done before. You’re going in, and learning something that’s never been learned. There’s also the independence aspect. I helped design and refine that activity assay I was talking about for the Lipin constructs.  Doing research is not like introductory bio labs where there is a set outcome and if it doesn’t work, you go the TA and say: “Why isn’t this working?” If you go to your PI and say that, he’ll say: “I don’t know, let’s figure it out.” Doing research, you’re really designing your own experiment. It might work, it might not. If it doesn’t work, you have to figure out what’s wrong through a combination of prior knowledge and educated guesswork. But that’s what I like about research ….You’re solving things. It’s like a puzzle. And it’s nice to have that independence to work on something, while at the same time knowing I’ll have someone to help me when I need it.

What advice would you give to students about undergraduate research?
Just go for it. You’re not going to know if you like it unless you do it.   I thought it would be boring, sitting at a bench all day…I didn’t know what it was going to be like. Then I joined – and I really fell in love with it.
Also, be prepared that for the first day you walk into lab. It’s a little overwhelming. You see all these crazy fancy machines that are worth more than your car…and all these labelled chemical bottles. It’s information overload. The best advice I can give is just to take it slow. Your PI or grad student mentor is not just going to throw you out into the wind. He or she will guide you until you get your feet in the water, and you know what you’re doing. Every day, you’ll passively absorb more information, learn what things are, how to use the equipment,  how to be safe in the lab. etc.

Any other advice?
Shop around for labs. Don’t just interview and go to the first lab you find. Wait until you find the lab where you’re truly interested in the research. That will make it a lot easier to do it. You’re going to be putting a lot of time into the lab so you want to find something you like.
It can feel a little awkward sending those initial emails — a little forced. But once you do it, you will find that it opens up a dialogue. They’ll interview you and that’s when you really get to talk with them and you can see if you interact well with the professor.

Has your involvement in undergraduate research given you a different perspective about your classwork?
The most amazing thing to me is that when you’re in a class, you just see all this information put on a board. Your job is to be a sponge and soak it all up. But research gave me a deeper appreciation for how much work and time and energy went into each of those discoveries. For example, the lac operon – it’s a thing you learn about in genetics. Imagining someone determining how all this stuff works for the very first time — the years they put in, all the failed experiments before something worked-- it makes me say “wow.” From doing research, you gain an understanding of all the work that must have been put in for every discovery.

You also can get a lot more done in the summer when you’re really focused on the research.
Definitely. Doing research in the summer was like working a regular job. You have all day to do your work. Now that we’re back in a new semester, I have to work around my school schedule. I have to think about when I can/can’t come in, and how long an experiment might take.

Is there anything you found particularly surprising about undergraduate research?
As I mentioned before, I was honestly surprised by how much I enjoyed it. I thought it was going to be that resume item. I found out though that I really like having my own project that I’m working on…We’re all working on this big overarching pathway in the lab. But it’s been really great to have my individual experiment that I can call mine and to have a sort of responsibility for something that I can work on.