Biology major with a minor in Chemistry, Class of 2018 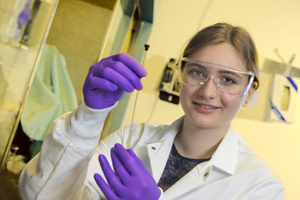 Dominique Spiegowski is a Biology major with a minor in Chemistry (class of 2018). Since day one, her dedication and commitment to the Ngai lab has been noticeable! Last summer, she commuted nearly 2 hours each way (from Ridgewood Queens) just so that she could put in the hours necessary to advance her project:  optimizing the synthesis of hydroxyl amines for use in photoredox reactions to yield various perfluoroalkoxylated heteroarenes. When Dominique learned that she had been accepted to the 2017 URECA summer program and would be able to devote herself to research full-time, she was thrilled!

Dominique first contacted Prof. Ming-Yu Ngai (Chemistry Department) about joining his research group in spring of 2016 while she was taking Organic Chemistry, a class that truly captivated her interest. She describes her good fortune that even though she had no previous experience in research, or had even taken Organic Chemistry lab, “he took a chance on me.” Upon joining the Ngai lab, Dominique began to work alongside graduate student Johnny Lee, learning various analytical techniques she needed (including TLC, NMR, GCMS) to contribute to the project. Recently, Dominique was named a co-author on a manuscript published in Chemical Science (June 2017) titled: “Selective C-O Bond Formation via Photocatalytica Radical Coupling Strategy: Access to Perfluoroalkoxylated Arenes and Heteroarenes.”

In her spare time, Dominique is a live in EMT- working night shifts three days a week for the Port Jefferson Volunteer Ambulance Corps. With both her research, and her work as an EMT, Dominique finds it satisfying that :  " You have to think on your feet. You have to be alert.  ... I like the fact that after taking all this time to study how things works –that now I’m actually getting my hands in it. "

She has also served as a teaching assistant for the AMS and Chemistry Departments; and has collaborated with the SB Chemistry Department to create tutorials through the S-BOLD Learning Initiative. Dominique is fluent in Polish and enjoys playing volleyball. Dominique plans to go to medical school, after taking a gap year to work as a paramedic. Below are excerpts from her interview with Karen Kernan, URECA Director.

Karen.  What is your current URECA research project about?
Dominique. So basically we work with hydroxyl amines. The Ngai group is big on fluorine chemistry –and my work in the lab entails optimizing the synthesis of hydroxyl amines for use in photoredox reactions to yield various perfluoroalkoxylated heteroarenes. I have learned various compound isolation, purification, and gas exchange techniques as well as use of a glove box to be able to set up and monitor reactions. My role in the project was basically creating all these hydroxyl amines – classifying them, checking them for purity, getting all the data on them (e.g. hi res mass spectroscopy, 1H NMR, 13C NMR, 19F NMR and R F)…and basically making these substrates so that we could go to the next step (redox reactions). I work closely with a graduate student. Generally, the work is a 2 step process – where I would do the first step and the graduate student would do the second step.

The perfluroalkoxylated aromatic compounds we are working may have a lot of potential uses but are tricky to prepare. That’s part of the challenge!

When did you join the lab?
I started in sophomore year. I was sitting in my Orgo 2 class. I really liked the subject, and thought, “I want to see this in action. I want to be part of this research.” So I emailed Prof. Ngai. I told him my situation, and that I wanted to do research in chemistry (even though I was a bio major) just because I find it very interesting. And he took a chance on me. I was very glad he did!  I’ve been there over a year now. And I have become passionate about my research!

How much time do you commit to the lab?
A lot! When I first started, I did definitely more than 20 hours a week. I’d come in on Saturdays, work the whole day. I put in a lot of time. It’s amazing how much you can get done in one day when you’re here all day which is why URECA Summer is great. The URECA stipend allowed me to stay on campus this summer. Last summer, I used to commute from Queens to Stony Brook every day – and that took up way too much time. I would come in - do research –come back home and sleep, and wake up again at 5 am to do the whole thing again. I was very glad not to have to do that again this summer!

And did you have any experience in research prior to joining the lab?
None at all. I actually did not take organic chemistry lab before joining the lab. So everything that I needed to learn about organic chemistry lab was taught to me by my grad student, Johnny Lee. He’s been a great teacher, and has a lot of passion for Chemistry. You can just tell…Learning from him was fantastic!

I actually strive to be like him when I am teaching new students in the lab. I have a notebook where I’ve written down a lot of my conclusions. So now, when there are other undergraduates who may be running a similar reaction, I pull out my notebook. And I can go back, and remember what I learned, and the conclusions I came to previously so that I can help others out with their reactions. It’s a cycle.

What advice is important to keep in mind about research?
With chemistry, often times reactions won’t work or won’t work the way you planned for – so if you see that something isn’t working, backtrack as much as you can. Try to figure out: Have I done everything that I should have?  There are times when you misread a mole amount or something, and you’re reaction doesn’t work and you sit there pondering: “What did I do wrong?” But don’t get discouraged. You will absolutely make mistakes. Finding your answers is going to take a lot of digging, a lot of frustration – but that’s the whole point. It’s for you to dig. Eventually you find your way around. You might feel like you’re going in circles but you will get there. If research was point A to point B, there would be no point.

What do you enjoy most about lab?
I like that every day is different. And you’re constantly solving problems – whether they be with your own experiments, or those of other people in the lab. You’re always building upon your knowledge…always learning so much. I also work for Port Jefferson Volunteer Ambulance Corps. (I’m one of their live-ins. That helps to pay for expenses. That’s also something that I really like because, as with doing research in lab, you have to think on your feet. You have to be alert.

With both research, and EMT, I feel like you’re doing a lot and finally putting all your theoretical knowledge to the test. I like the fact that after taking all this time to study how things works –that now I’m actually getting my hands in it.