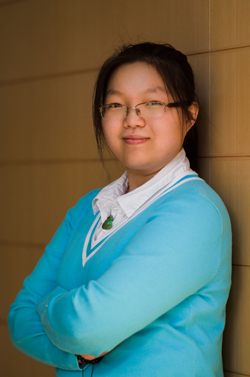 One of the honorees in the " Her Campus 22 under 22 Most Inspiring College Women in 2017" list, just released, is SB undergraduate  Ann Lin —   a senior in the Honors College, double majoring in Biochemistry & Economics. Earlier this year, Ann was recognized nationally as a Goldwater Scholar,* and has drawn attention as a rising star at numerous scientific meetings and hackathons. Recently, Ann won an Outstanding Presentation award at the Mount Sinai Icahn School of Medicine Undergraduate Research Symposium in the category of Cancer Biology/Immunology and was invited to give a talk on “ CRISPR/Cas9 mutagenesis invalidates a genetic target of clinical trials in cancer.” She has been in the spotlight at CalTech where she was awarded "Best Social Hack" for the creation of a web platform that helps facilitate the sharing of biological reagent between laboratories and promote intra-lab communication; and at Rochester University where she was honored with a "Best Web Hack" for creating a web platform that helps patients to compile all their medical records.

Since freshman year, undergraduate research has been a major component of Ann’s education and has shaped the direction of her studies — providing opportunities for her to explore her interests in synthetic biology, virology, cancer biology, and computational biology. In her freshman year, Ann gained a strong foundation in laboratory techniques by working in the laboratory of Dr. Laurie Krug ( Molecular Genetics & Microbiology), studying the Role of Viral Uracil DNA Glycosylase (UNG) Activity in Murine Gammaherpesvirus’ (MHV) Latency Mechanism . She also honed many research skills as a team member of iGEM, a group which earned a silver medal in the 2015 iGEM international Jamboree competition for its project on ” Regulating Blood Glucose Levels With Peptide Secreting Microbes.” Ann's iGEM experiences motivated her to organize the Synthetic Biology Club at SBU (2014) and to serve as its President in its first year.

Currently, Ann divides her time between two primary research groups: under the mentorship of Dr. Gábor Balázsi ( Biomedical Engineering,  Laufer Center ), Ann is working on her senior honors thesis, studying the evolution of multicellularity using a yeast model. She has also devoted a significant amount of time and effort over the past 2-years to Dr. Jason Sheltzer's laboratory at Cold Spring Harbor Laboratory (CSHL) where she analyzes survival-associated genes in cancer using CRISPR/Cas9 and investigates the role of Maternal Leucine Zipper Kinase (MELK) in Triple Negative Breast Cancer. Ann has already co-first authored a paper on this work and is at work on a second publication. Ann’s research in both the Sheltzer and Balázsi  research groups has been supported by URECA summer awards, as well as a handful of travel grants. Asked about the role her mentors have played in her life, including Dr. Sheltzer, Dr. Balázsi, Dr. Krug, & Dr. Gergen, Ann reflects: “I think they have all played a very unique role in my development – each one of them. ….  These are sequential pieces of the puzzle – and they make me who I am, all of them. ”

Currently Ann is in the process of applying a Fulbright scholarship for post graduate study to explore "organ on a chip" technology in Norway. She plans long term to pursue a PhD in the area of genetics/cancer biology. Prior to coming to SB, Ann was active in research as a high school student at Farmingdale HS, working at Cold Spring Harbor Laboratory through the Partners of the Future program and also at Columbia University through the Science Honors Scholar (SHP) program. Ann is a first generation college student and resides in Flushing, NY. Her main hobby is traveling to Hackathons, where she enjoys taking a lead role and working on innovative ways to combine computer science and biology to accelerate research. Below are excerpts from her interview with Karen Kernan, URECA Director.

Karen.  What gets you most excited about going to lab each day?
Ann. I guess the knowledge that you know that you’re going to learn something new. That’s also what gets me to go to class!

How important have mentors been for you?
I think they have all played a very unique role in my development – each one of them. I was in the Krug lab and I learned western blotting and that led me to being able to do what I need to do in the Sheltzer lab- which was performing protein analysis. In the Sheltzer lab, Dr. Sheltzer taught me a lot of data analysis with Prism, R, …and he always asked me questions & induced my curiosity in different areas. Because of that, I became interested in computational biology and I joined the Balázsi  lab where I’m now working on my senior thesis on multicellularity, a project that brings technology and science together….. Dr. Balázsi was actually someone I had met freshman year as an advisor through the iGEM program. And in iGEM, we also worked with Dr. Gergen, who helped us with anything we needed for the team, and has also written recommendation letters for me and supported me throughout ….  These are sequential pieces of the puzzle – and they make me who I am, all of them.

What are your long-term plans?
I’m currently applying for Fulbright to go to Norway. If I get the fellowship, I ‘m going to be involved in this huge multidisciplinary international collaborative effort to advance organ on chip technology-- basically  a chip the size of a USB that is lined with different cells in particular patterns –to mimic that organ’s physiological state.. After that, I will apply to PhD programs, probably in in genetics.

How do you think research has influenced your education?
I think it made me a more aware person. I am a biochem major. We read textbooks all the time about all the different discoveries but we don’t learn about the time people put into trying to make these discoveries or the time trying to find answers to these questions. Because I’m involved in research, I understand the time researchers have to put it. And the people who are involved …I have a deeper appreciation of knowledge in general.

Do you enjoy the challenge of learning something new?
Definitely. I think in my first experience with research, everything was just not working. And then all of a sudden there was a day where I could see: “It’s working! I’m really good at this.” I guess it’s just getting past that point where everything becomes second nature to you. From that point on, it’s easier to work on questions that you actually want to answer.

Research has continually brought me to different fields, pushed me in new directions. I remember one time when Dr. Sheltzer, who is very interested in data mining, encouraged me to go to a Hackhealth at MIT. I was the youngest participant there which was super scary. But I went on stage and I pitched my idea. And I was able to meet researchers, doctors, surgeons, businesspeople from all over the world. And that motivated me to do more.

So you do enjoy presenting your work?
I love sharing whatever we’re doing with other researchers. Publishing papers is one of the ways to get ideas out there. And going to conferences.One of the best experiences I had was going to Washington for the AACR meeting (April 2017). There were 4 rooms filled with posters –all different types of cancer research, and opportunities to meet with other researchers, doctors, even cancer patient survivors. It was an amazing experience… I also presented this research at the Mt Sinai symposium just recently –and got invited to give a talk. It was great to see how other people perceive my research, and to learn from the follow-up questions and conversations that took place.

Have you always been so confident?
During freshman year, just the idea of presenting the iGEM project was super frightening to me. As I present more and more at different conferences, though, I’ve become more comfortable with the environment and I’m able to say what I want to say. I used to be wary of questions, the unexpected component of conferences...but I’ve since become more accepting with not knowing how to answer a question. Now I know it’s okay to say “I don’t know.” 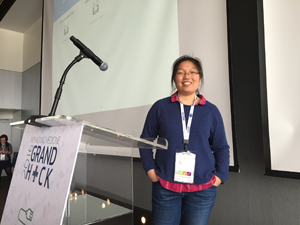 The same thing applies to hackathons. The first time I was at a hackathon, it was super scary because everybody there knew how to code. I had no experience of what it was going to be like, or if people would want to work on project with me. It was all a new experience – pulling people in, trying to convince them that the project was important….  And now Hackathons are my main thing. I love going to them.

And you’ve learned how to code since then?
Yes. A big part of what drove me to learn was wanting to be an effective team leader. You have to be able to communicate with your team members. That was one of the main reasons why I learned how to code.

When you initially came to SB – you were primarily focused on the study of biology. What made you decide to add Economics as a second major?
At the time when I realized that I had almost finished with my biochem major requirements, I knew I could either graduate early, or take up a second major. And I wanted to take up a second major related to math. Math is one of the skills that is important in life, regardless of what field you go into. So I decided on Economics. And I don’t regret that decision because I was able to learn more computer languages, more about data processing. And that all went along with me learning more languages for my research. Another thing is modelling – being able to predict the future, to predict and allocate resources. Economics is a study of scarcity and how we model our use of resources. I thought that was super interesting. And it definitely increased my math skills.

Being part of Honors College has also had an impact on broadening my education. We take a lot of non science courses. I’ve even taken a course on Rock and Roll. I like to learn about things that are outside of science.

Were you pre-med initially?
I came to SB because they have such a great premed program. My parents wanted me to go to med school. Doing research, I realized I should pursue what I’m interested in and what my passion is -- which is science.