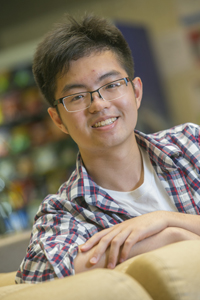 Aaron Kuang is a Biology major, class of 2018, who has spent many hours over the last year doing research in the spinal cord injury translational lab of Dr. Prithvi Shah. Although he was very active in this laboratory's experiments throughout the 2016-2017 academic year, and has been immersed in research full time this summer, Aaron clearly remembers being daunted by the prospect of starting undergrad research, and thinking: “W hat can an undergrad contribute…?” Luckily, Aaron did pursue the goal of finding a research position ~one year ago, answering a posting on the URECA page from the Shah lab.

He soon discovered for himself that “You can definitely contribute in ways that you didn’t originally plan to.” Working closely with the other team members of the Shah lab, and becoming known for his “can-do” attitude, Aaron has played a key part in helping develop an ADATS (Automated Device for Assessment and Training of Skilled locomotion) device that will be presented by the Shah lab at a Society for Neuroscience meeting in November. Aaron also gained experience using novel 3D reconstruction software for the project, as well as in working with spinal cord tissue, doing data collection and data analysis for an epidural stimulation study, and in animal handling. He notes: “ A lot of people are scared of rats but they’re actually quite fantastic!”

At SB, Aaron has also been involved as a Teaching Assistant for Physics (PHYS 121) and for Genetics (BIO 320) and has volunteered at Stony Brook hospital in the Hand Therapy clinic. Aaron plans to go to medical school, after taking a gap year.

Aaron is a resident of Brooklyn who attended Stuyvesant HS prior to coming to Stony Brook and is a first-generation college student. His hobbies include cooking, and handball. Below are excerpts from his interview with Karen Kernan, URECA Director.

Karen.  How long have you been involved doing research in the Shah lab?
Aaron. I started in the beginning of junior year. The Shah lab was actually my first research experience.

Was undergraduate research something you always knew you wanted to be involved in when you came to Stony Brook?
Definitely not. When I first joined SB, I was still stuck in a high school mentality: take classes, go home and that kind of thing. It wasn’t until two years in that I figured something was missing in my college career. I wanted to expand my horizons and I thought about trying research. I had a couple of friends doing research and thought maybe I should try it too.

So how did you first learn about the Shah lab opportunity?
I actually found the lab through a URECA posting. It was an old ad but Dr. Shah was still accepting undergrads. I am very fortunate that she accepted me into the lab even though I had no prior lab experience… I remember Dr. Shah saying, “f you’re willing to work, than we’re willing to have you.”

Was it difficult learning new techniques and getting acclimated to the lab environment?
It’s a small lab, and I got a lot of help from a master’s student, Tiffany Richards, and a PhD student, Pawan Sharma, both of whom have shown me much of what I have to do and helped me learn along the way. I’m very close to them and we work interchangeably on the same projects.
Dr. Shah also goes out of her way to teach to all of the lab members, especially undergrads, how to read through scientific literature and criticize it. And she personally helps us learn about techniques such as perfusion, cryostat, histology…and so on.

How has being involved in research enhanced your education?
It’s a completely different beast than taking classes. What I’ve gained is definitely something that I would never have accomplished or learned if I stayed with lectures and introductory biology labs only. With a biology introductory lab, everything is planned for you. You know the process and how it’s supposed to end. If you’re off, you know you probably did something wrong. There’s no real challenge to fixing a problem, compared with the critical thinking required of doing lab research. Also, when you are in lab, you are working with information that you might not have had a chance to learn about in class otherwise. Right now, I’m helping on a project on epidural stimulation – which is a great learning experience for me, but something that would probably not be covered in my classes.

What‘s the main goal of your current project?
To update current testing technologies in the field. Horizontal ladders are used a lot in spinal cord injury projects because it’s a very simple and reliable way to track recovery in rats. But we feel that it also introduces a lot of variability in speed due to the nature of its design. So what we’re trying to do is to improve current technology, to provide other testers with a more reliable way of tracking and publishing their data. That’s the ADATS project: Automated Device for Assessment and Training of Skilled Lomotion, a custom built device that mimics the skilled locomotor task presented by the horizontal ladder but controls for speed variability.

What do you most like about doing research?
I like being able to solve problems that come in my path. That for me is the best part of lab. And what I like about it is actually is what’s most frustrating too. In my lab, we work with rats, and they are living beings. They have a mind of their own. …and can be uncooperative during testing. So I had to learn to accept that not everything in a real lab goes the way you want it to go. There are going to be exceptions to what you initially would expect. But you learn how to compromise and work with what you have, and still find some satisfaction in what you are able to learn.

What kind of time commitment have you made to the lab?
When I first started, it took up about 20 to 25 hours a week. I had a lot of time on Saturdays and Sundays. Currently in the summer I work full time (40-45 hours a week). A lot of the time is spent in data collection/data analysis. A project like this takes hours and hours of that.

What advice about research would you give to other students?
The idea of research is very daunting, I know. I found that when I was trying to apply. Because I was thinking: what can an undergrad contribute to publications on genes and other hard doctorate level ideas? Not all research has to do with things out of your potential. You can definitely contribute in ways that you didn’t originally plan to.

Sounds like it was good for you to push yourself to try research.
It is. I would recommend to anybody not knowing what to do in their college years to also do that – to give it a try. That’s why I got involved. All I had was GPA, and I didn’t really step outside of that safety zone. But I see now that there’s a lot to gain in doing things that you’re uncomfortable with and doing things that are different. One year ago, I definitely wouldn’t have seen myself in this position. I would have thought that if I join the lab, I would do minor stuff – more routine procedures that don’t really require you to critically think. But you can actually do a lot more if you are interested in doing more.

It has worked out well for you!
It has. Maybe you’ve noticed, but I’m kind of low-key, quiet…but basically research has helped me become more open as a person. You meet new people, you get to talk about research to different people. For me, the lab have pretty much become family. So in many ways, research has helped me develop, in ways I did not expect.