Study Sheds New Light on the Nature of Dark Matter

In a recently published study, Drs. Rosalba Perna, Rouven Essig, Peizhi Du, and collaborators propose a new way to search for novel particles not contained in the current standard model of particle physics. 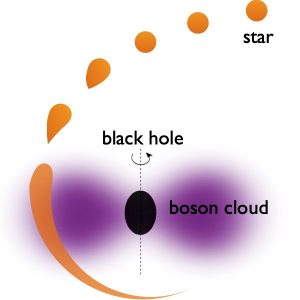 Image courtesy of Peizhi Du. A star (orange) that gets close to a supermassive black hole (black) can be tidally disrupted by the black hole’s strong gravitational pull. According to a new study, if ultra-light bosons exist (purple), they can affect the spin of the black hole, which in turn affects the rate at which tidal disruption events occur.

Stars passing close to the supermassive black hole found in the center of galaxies are disrupted by tidal forces. These disruptions cause flares that can be observed as bright transient events.

The rate at which these events occur depends on the spin of the black hole, which can be affected by ultra-light bosons surrounding it.

"The potential implications of our findings are profound. The discovery of new ultra-light bosons in stellar tidal disruption surveys would be revolutionary for fundamental physics"

The results from the new method could help illuminate the nature of dark matter.

"These new particles could be the dark matter, and thus the work could open up windows into a complex dark sector that hints toward more fundamental descriptions of nature such as string theory."

The article, published in Nature Communications, may be viewed here. A university news article highlighting the achievement may be read here.