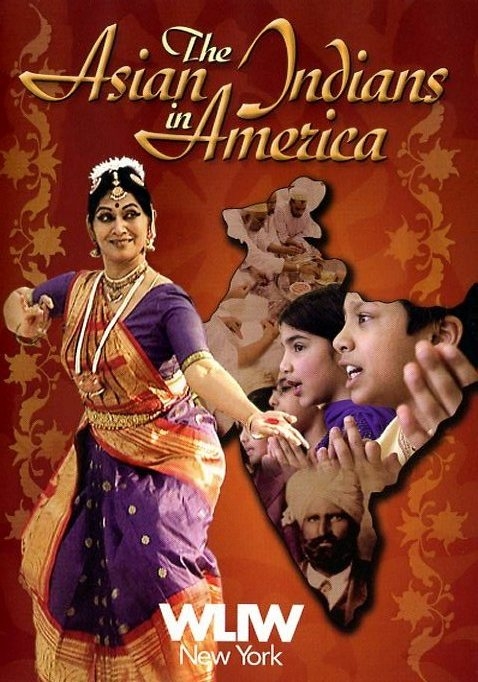 The Center for India Studies was the principal advisor for the hour long documentary, "The Asian Indians in America" produced by Roman Brygeder for WLIW TV on Long Island and broadcast in all the major markets nationwide in 2004.

Watch  The Asian Indians in America on PBS.

In addition to teaching and research, a major thrust of the Center is Outreach. The Center conducts educational programs on India at the invitation of educational, cultural, and civic institutions, a selection of which is given below. The host institutions include colleges and universities, schools and school districts, museums and public libraries, ethnic cultural organizations, multi-faith centers, business and civic groups. The Center also has an “In-Reach” program, which assists campus in their India-related initiatives. We also teach non-credit courses open to the public on campus.

The Center provides an extensive range of services tailored to specific needs of institutions all over the New York metropolitan area and the United States. These services include, for example, language proficiency testing and placement for South Asian immigrant children in the region’s school districts; referrals to South Asian language interpreters for county and state government agencies, such as law courts, school boards, and social service agencies; referral of India experts for the media; briefing sessions for state and federal policy makers on India-related legislation and for candidates to state and national office; and assisting individuals with their informational needs about India.

In order to create a better awareness of the historical and contemporary significance of India in world affairs, the Center works closely with many academic and student services units on campus to promote India-related initiatives. This cooperation ranges from co-sponsorship (including financial assistance) assistance in planning and program design, identifying resource persons, and providing publicity.

Past Campus units the Center has co-sponsored programs, activities, and events 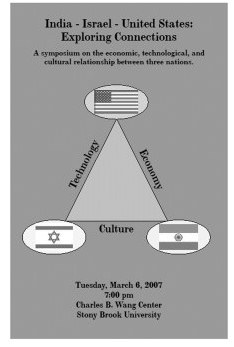 2012: An Interactive Conversation on Kannada Culture 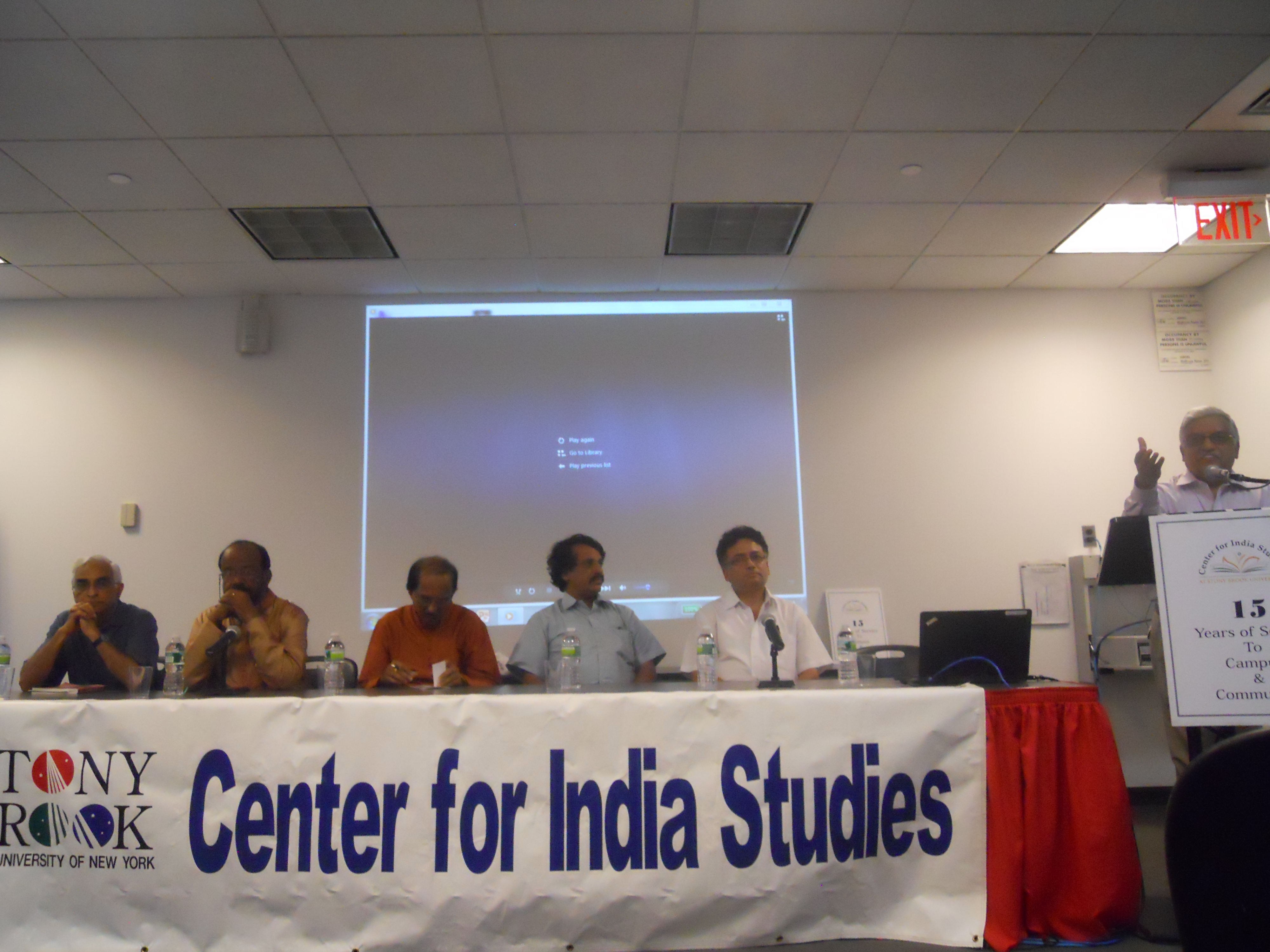 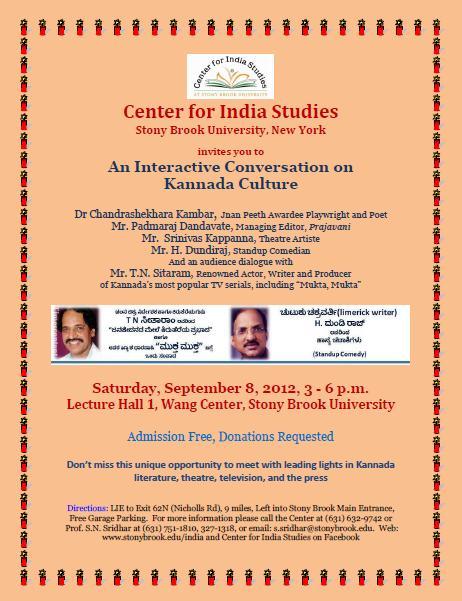 Non-Credit Courses for the Community 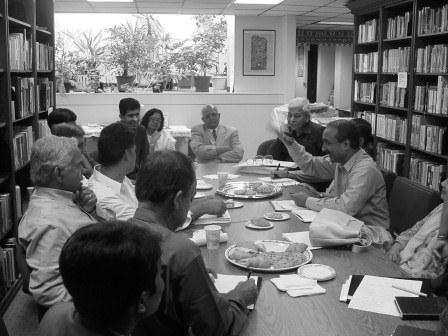 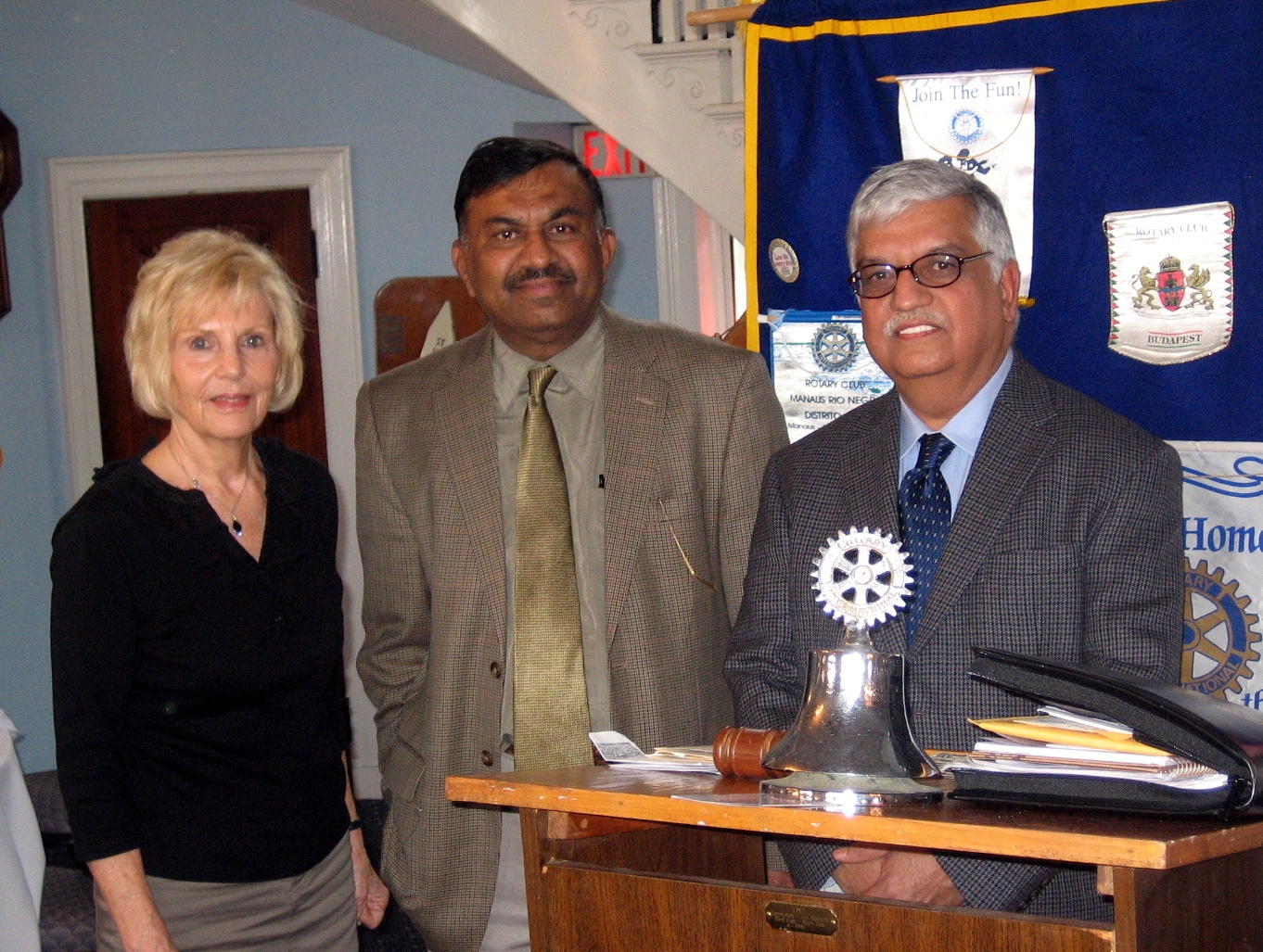 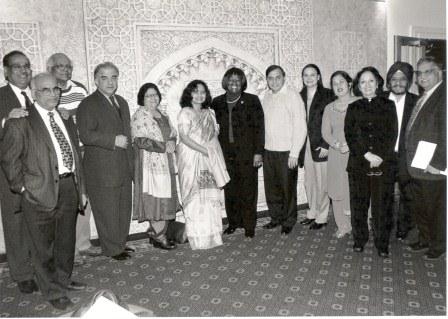 A number of slide and lecture presentations on topics such as, “India’s Contribution to World Civilization,” “Indian Children in American Schools,” “Teaching India in Public Schools,” “Sanskrit,” “India’s Pioneering Research on Language and Linguistics,” “Indian Languages in the U.S.,” “Science in India” and others have been given at numerous public libraries all over the New York metropolitan area, including, to name a few,

Seminars and Workshops at Schools, School Districts and Professional Forums
Workshops for teachers, teacher trainers, and administrators on the Language and Cultural Background of South Asian children 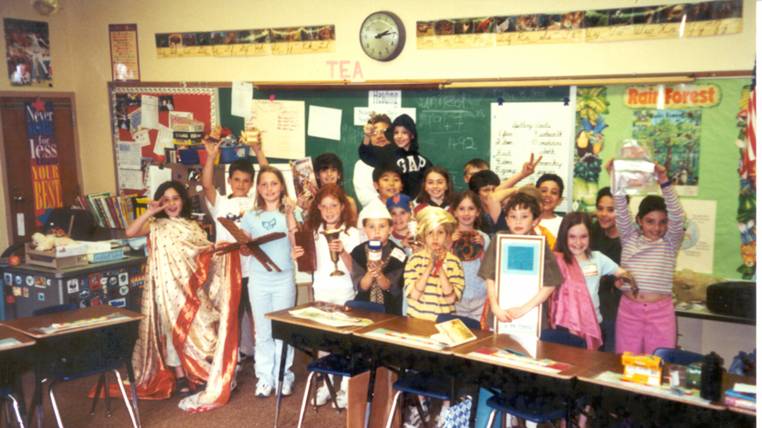 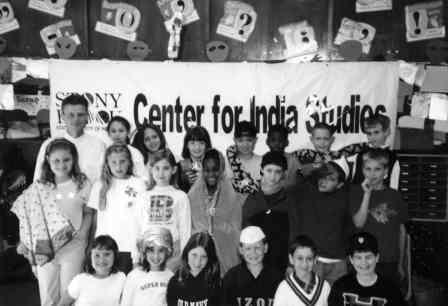 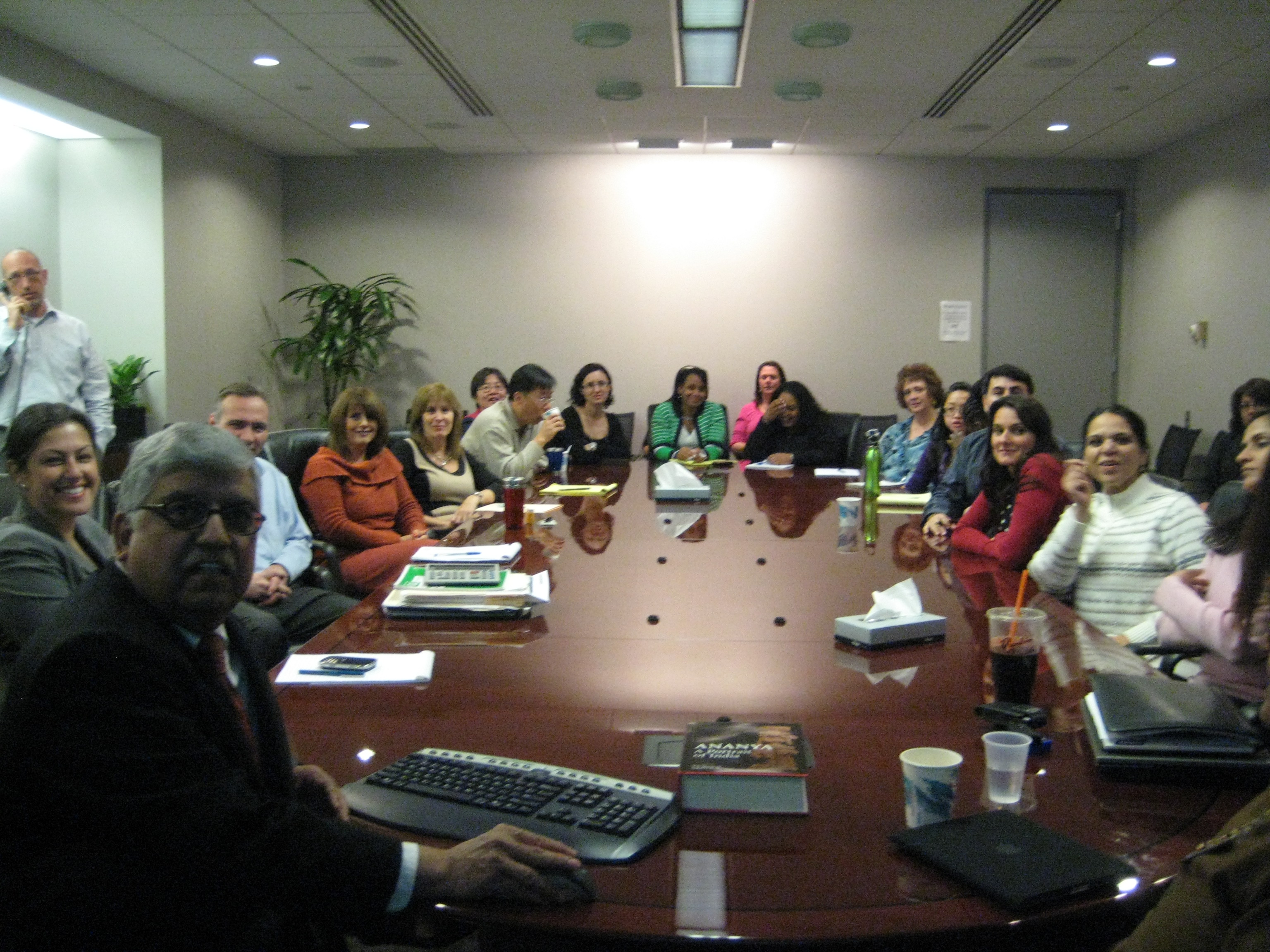 The Center has assisted numerous media organizations in their reporting and analysis of India and Indian Americans, including, among many others, the following.

References to the Center in the Media 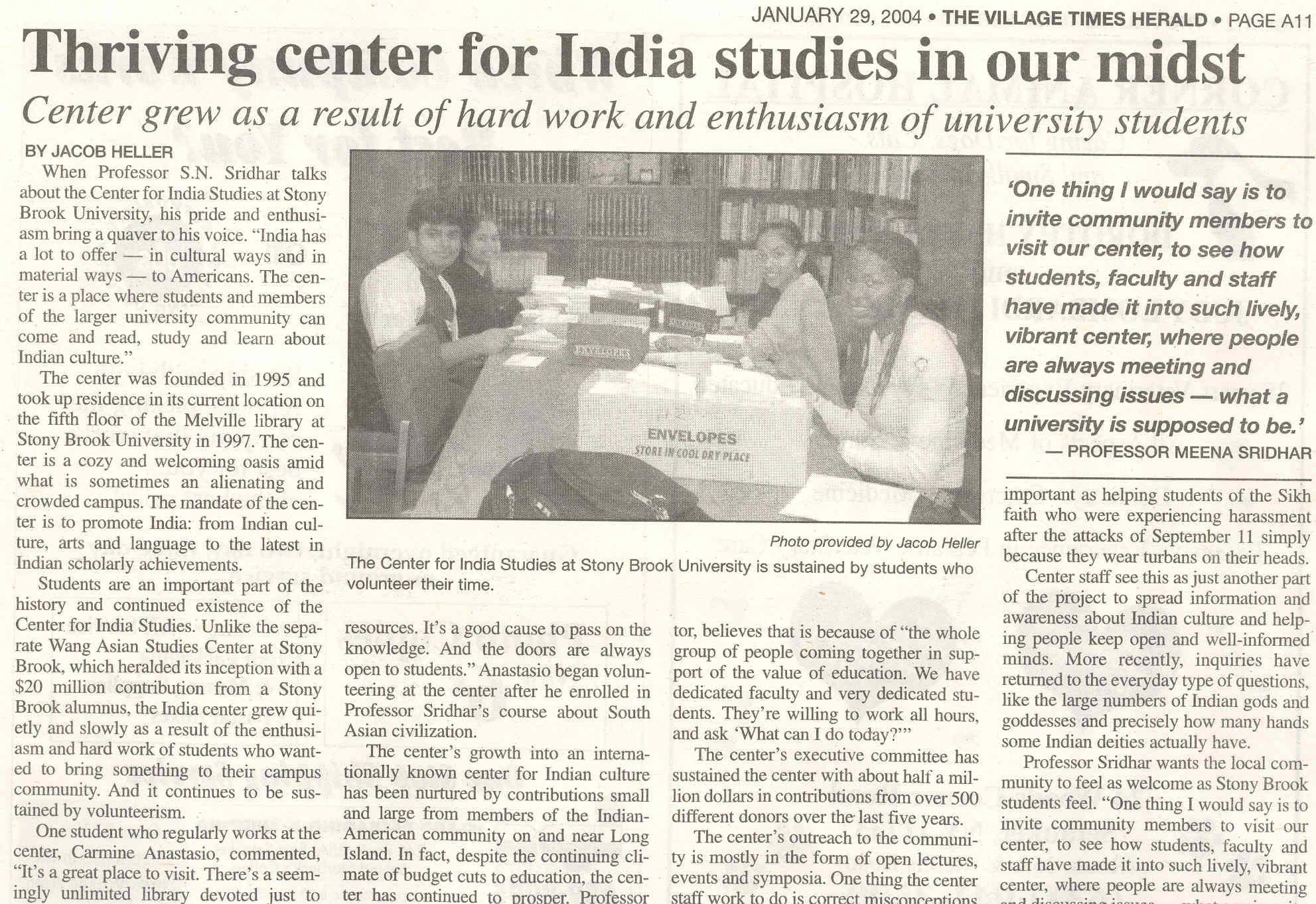 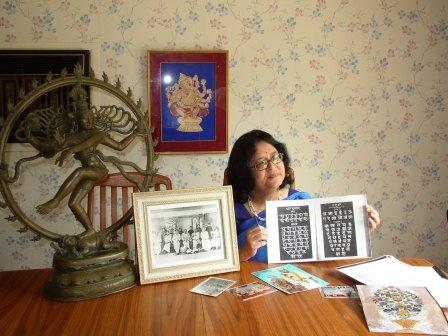 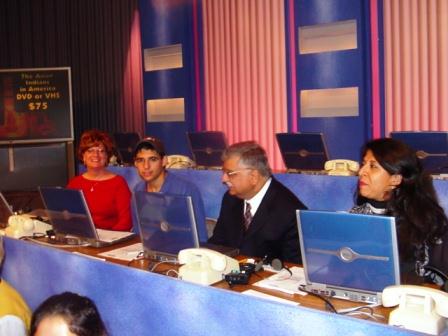