The endowed Gujavarty Seminar on Leadership and Values, designed for undergraduate students, seeks to foster values-based leadership from inside and outside the Asian Indian community and to develop a sense of shared purpose.  It will attract nationally prominent leaders from the Asian Indian community to share their vision, values, strategies, insights and experience in defining leadership in business, not-for-profits, media, politics, education, and ethics.

A Conversation with Preet Bharara 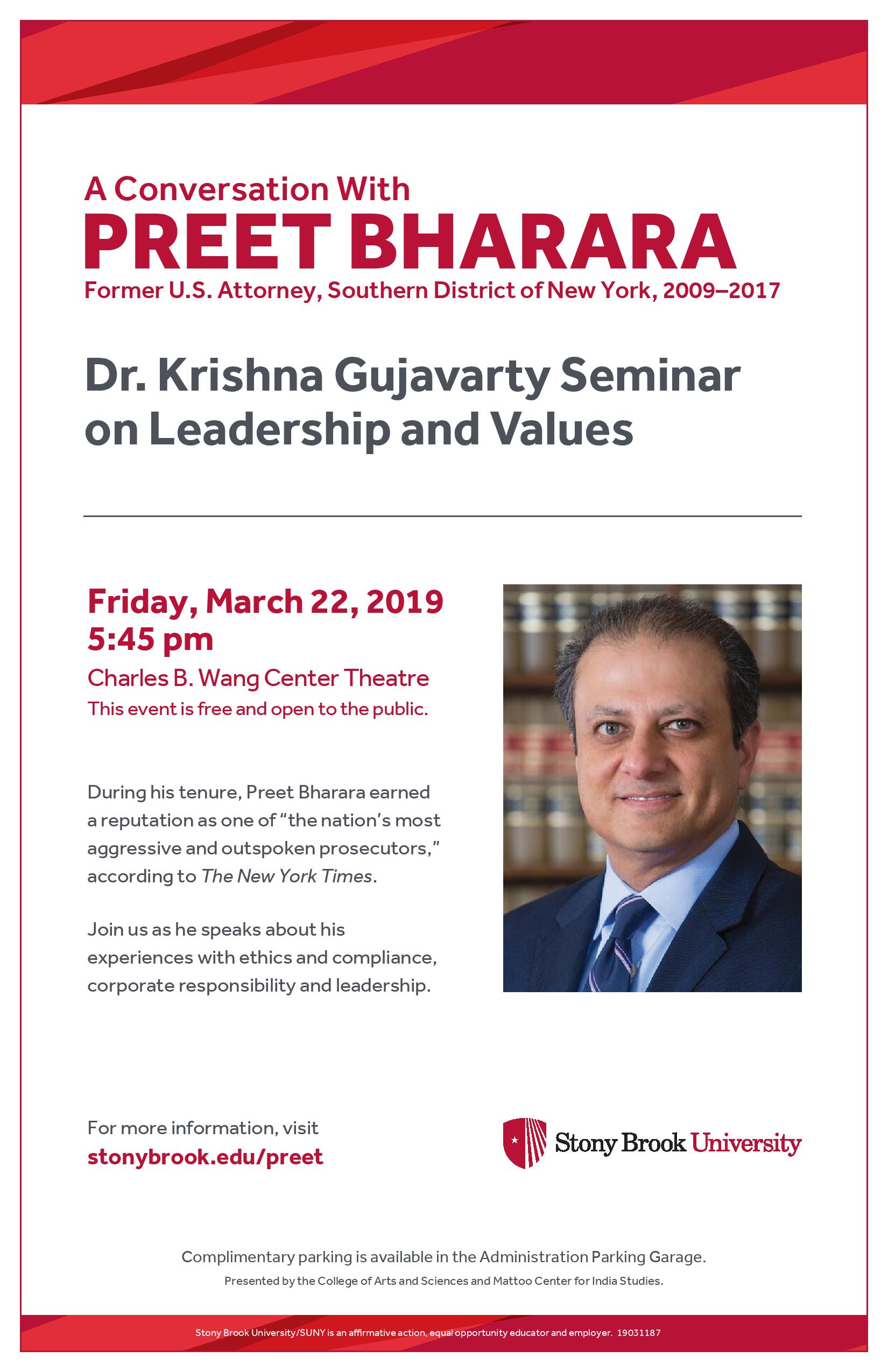 During his tenure, Preet Bharara earned a reputation as one of “the nation’s most aggressive and outspoken prosecutors,” according to The New York Times.
Preet Bharara spoke about his experiences with ethics and compliance, corporate responsibility and leadership. 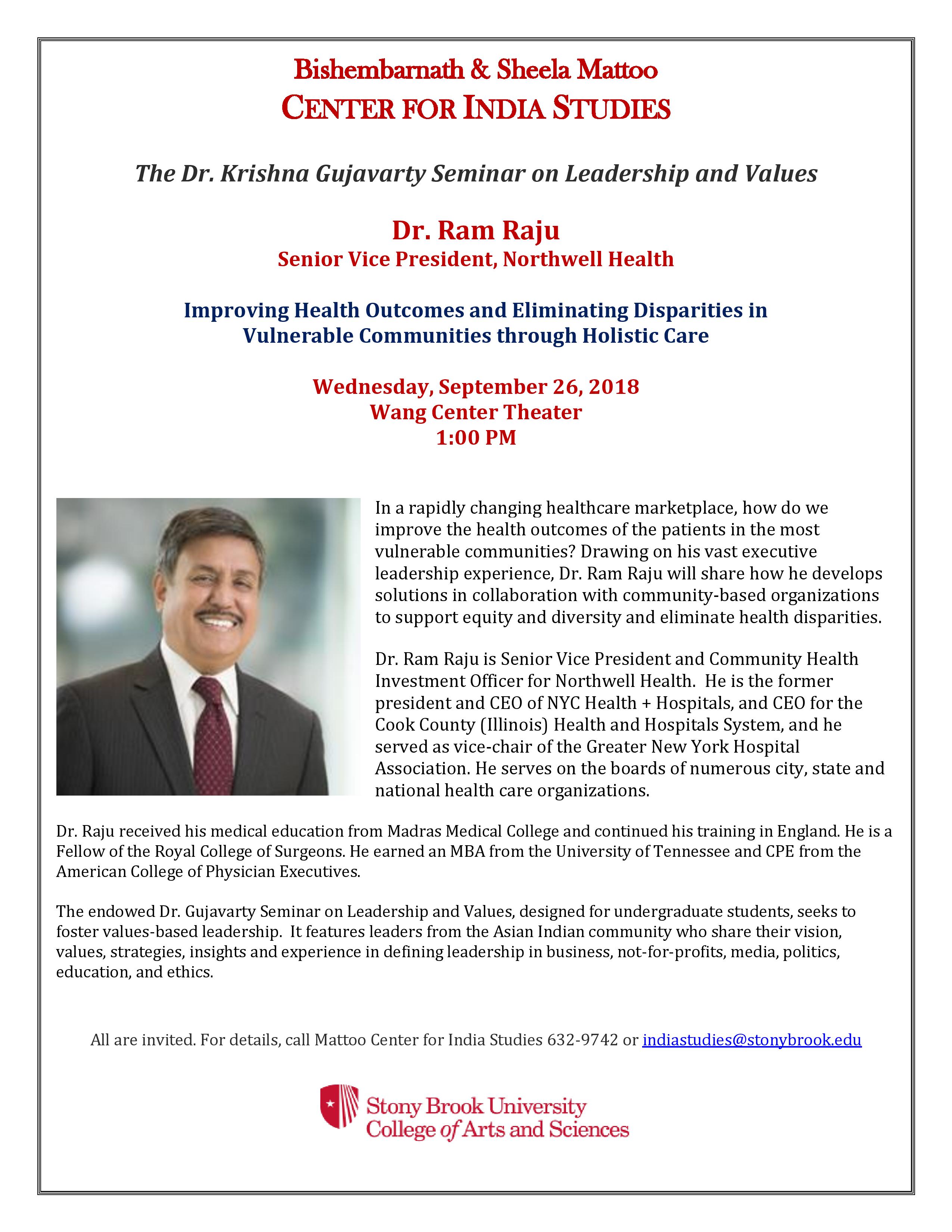 Dr. Ram Raju is Senior Vice President and Community Health Investment Officer for Northwell Health. He is the former president and CEO of NYC Health + Hospitals, and CEO for the Cook County (Illinois) Health and Hospitals System, and he served as vice-chair of the Greater New York Hospital Association. He serves on the boards of numerous city, state and national health care organizations.

Dr. Raju received his medical education from Madras Medical College and continued his training in England. He is a Fellow of the Royal College of Surgeons. He earned an MBA from the University of Tennessee and CPE from the American College of Physician Executives.

The Future of Leading in a Multicultural World 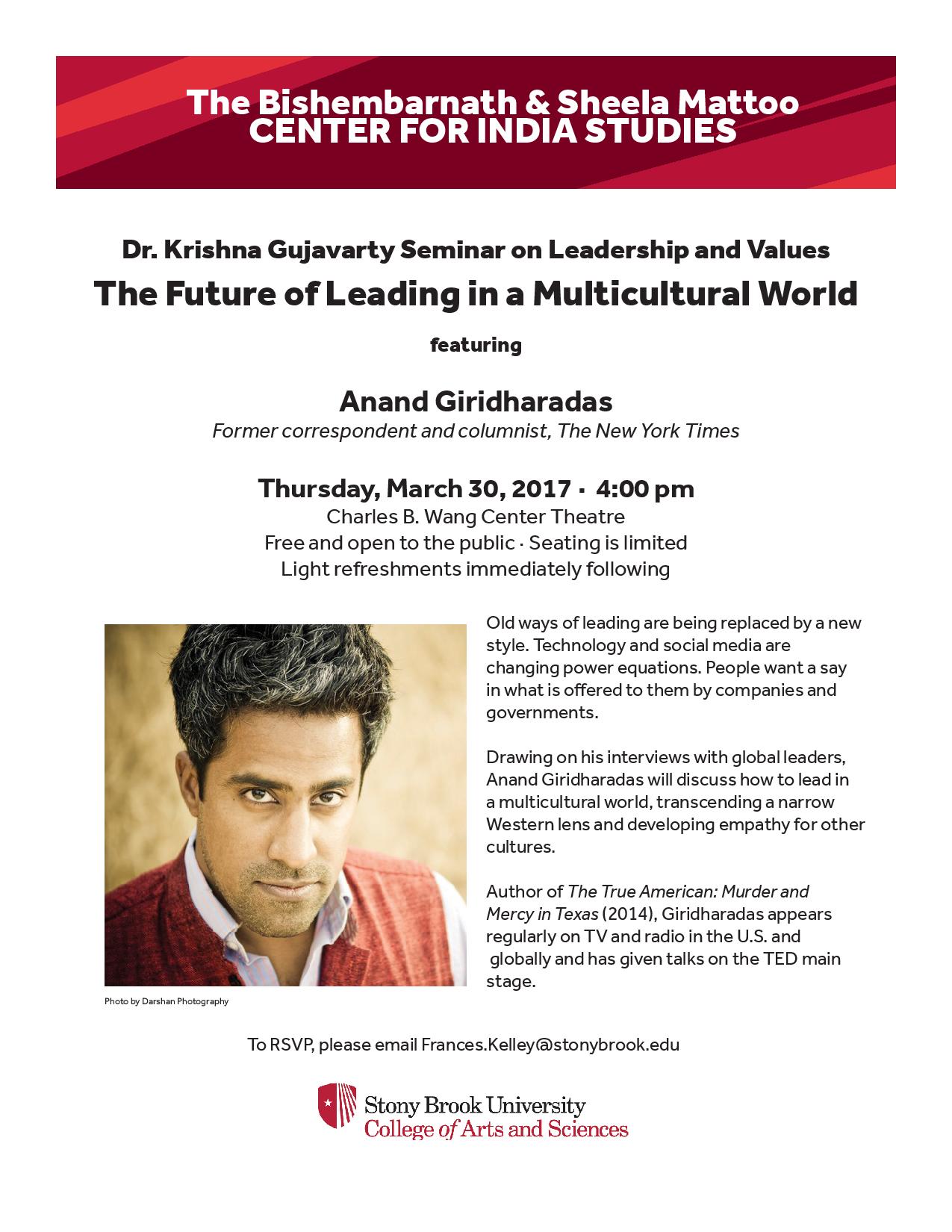 Old ways of leading are being replaced by a new style. Technology and social media are changing power equations. People want a say in what is offered to them by companies and governments. Drawing on his interviews with global leaders, Anand Giridharadas will discuss how to lead in a multicultural world, transcending a narrow Western lens and developing empathy for other cultures.

Author of The True American: Murder and Mercy in Texas (2014), Giridharadas appears regularly on TV and radio in the U.S. and globally and has given talks on the TED main stage. 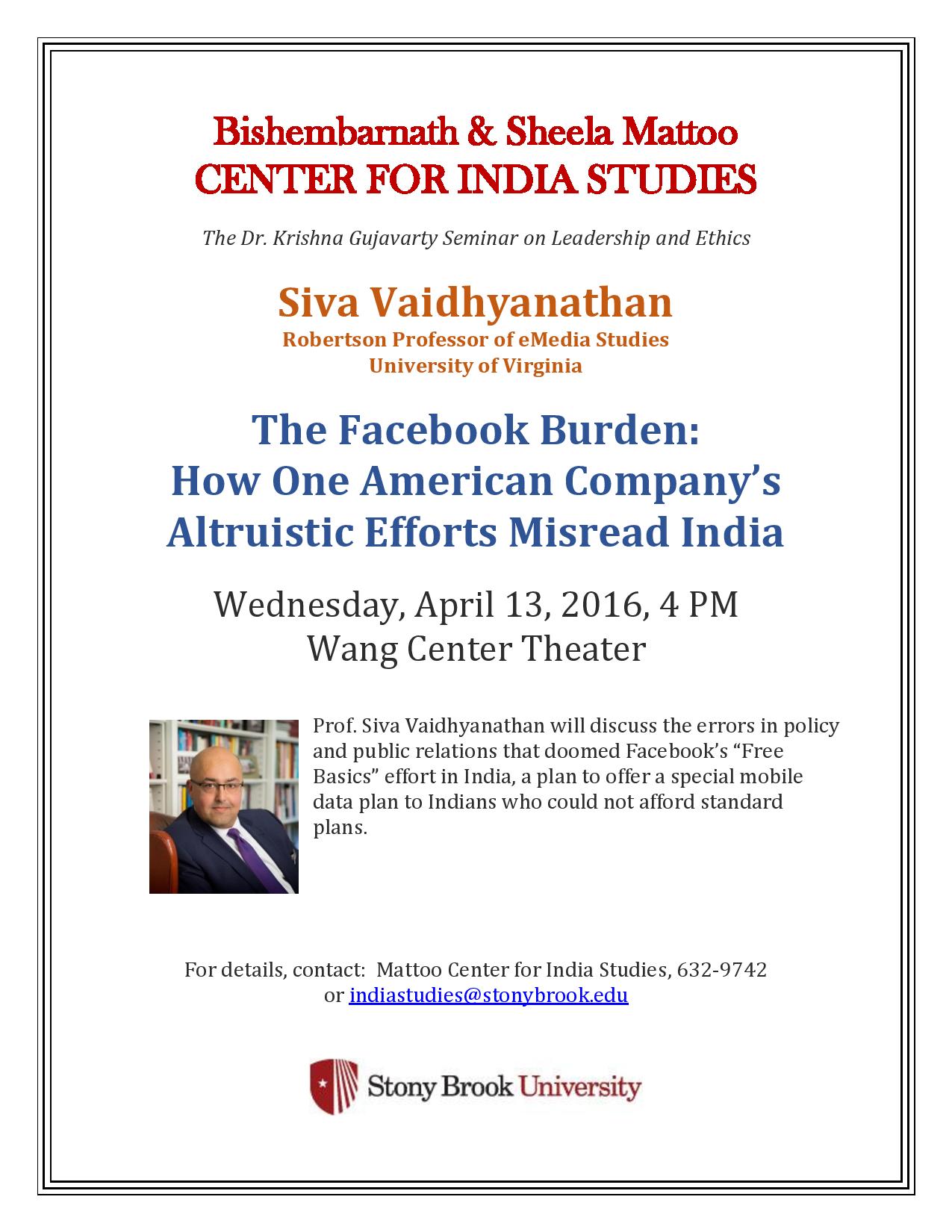 Prof. Siva Vaidhyanathan will discuss the errors in policy and public relations that doomed Facebook’s “Free Basics” effort in India, a plan to offer a special mobile data plan to Indians who could not afford standard plans. 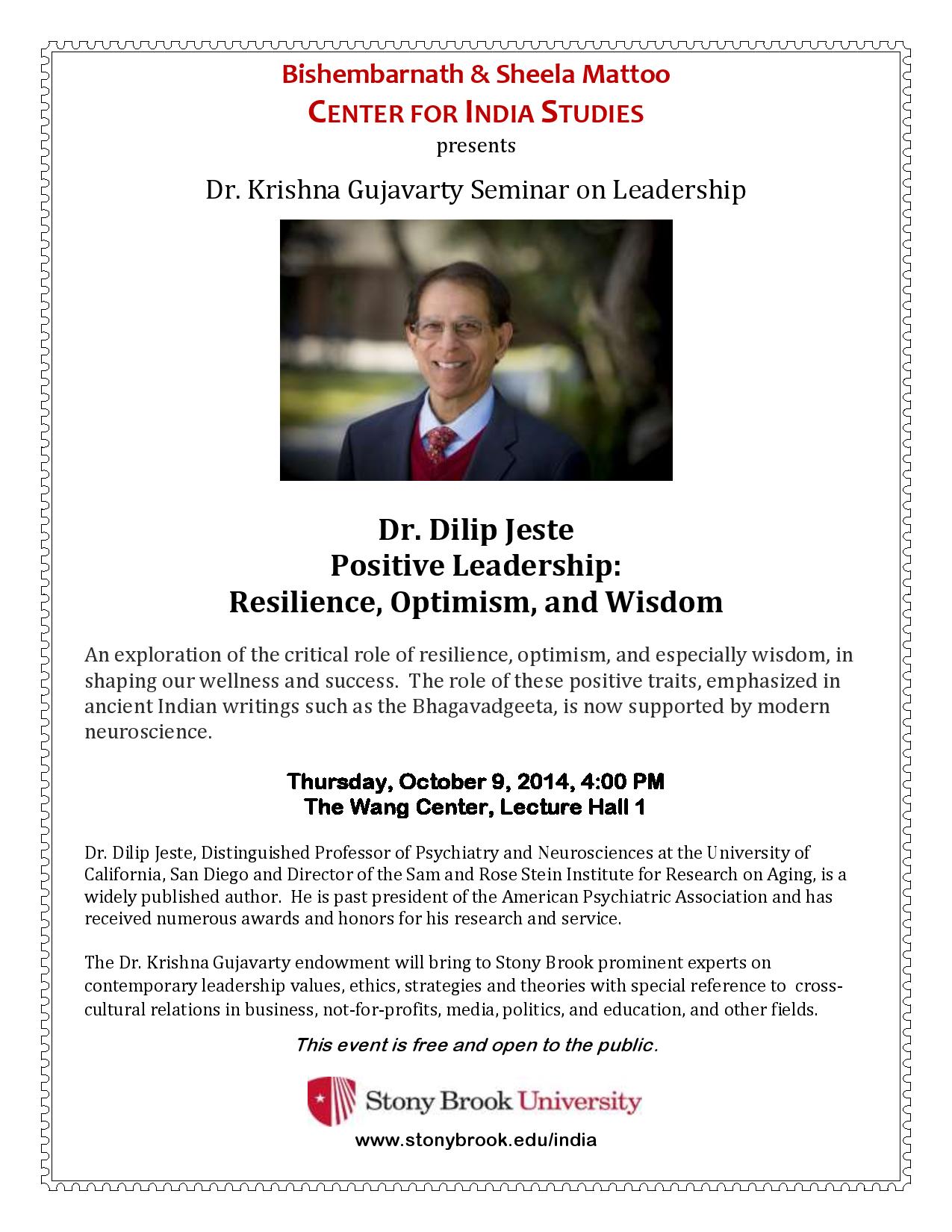 Dr. Dilip Jeste, Distinguished Professor of Psychiatry and Neurosciences at the University of California, San Diego and Director of the Sam and Rose Stein Institute for Research on Aging, is a widely published author. He is past president of the American Psychiatric Association and has received numerous awards and honors for his research and service.

An exploration of the critical role of resilience, optimism, and especially wisdom, in shaping our wellness and success. The role of these positive traits, emphasized in ancient Indian writings such as the Bhagavadgeeta, is now supported by modern neuroscience.