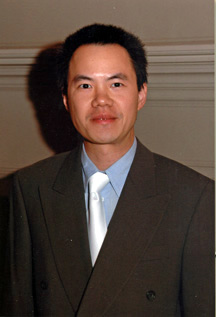 I. Global Directions and Themes

My group’s research has primarily focused on two main areas (namely, nanotube chemistry and nanostructure synthesis) that will broaden the potential impact and practical applicability of nanostructures.

In this area, we have reacted nanotubes as if there were chemical ligands (be it inorganic or organic) in their own right, e.g. as if these were simply complex alkenes. The work in our laboratory has been involved with understanding chemical reactivity involving carbon nanotubes from a structural and mechanistic perspective, which should hopefully expand the breadth and types of reactions CNTs can undergo in the solution phase. Specifically, the protocols that we have created have significantly enhanced the ability to purify, exfoliate, process, solubilize, and even render biocompatible CNTs, thereby permitting more facile photophysical, catalytic, and biomedical applications of these systems. Controllable chemical functionalization suggests that the unique optoelectronic and mechanical properties of SWNTs can be tailored in a determinable manner. 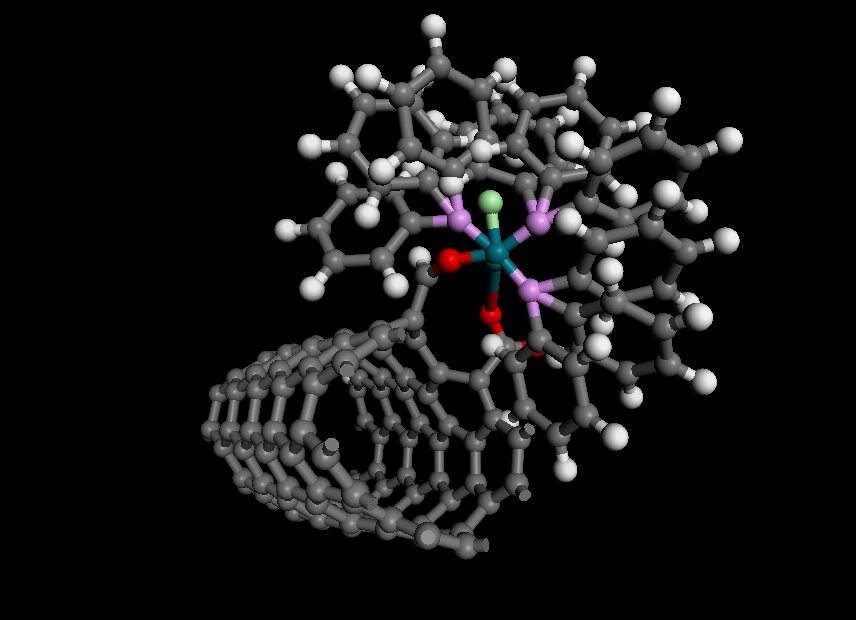 Early on, we expended a lot of effort on developing innovative syntheses of nanoscale formulations (including cubes, tubes, wires, spheres, and rhombohedra as well as aggregates and arrays) of perovskite oxide materials. More generally, we have implemented a number of viable environmentally friendly synthetic methodologies in the fabrication of a range of ternary and binary metal oxides, elemental metals, titanates, fluorides, phosphates, sulfides, tungstates, niobates, zirconates, ruthenates, and ferrites. In fact, most of our processes run under either ambient conditions or low temperatures, and can be efficiently scaled up. Moreover, our simple protocols are generally cost-effective; use mainly nontoxic precursors; limit the numbers of reagents and reaction steps; minimize waste, reagent use, and power consumption; and involve the development of high-yield processes with a relative absence of volatile and toxic byproducts.

In particular, we have made important advances in the use of molten-salt synthetic methods, hydrothermal protocols, and ambient template-directed techniques as green, cost-effective methodologies to generate monodisperse nanostructures with precise size and shape control without sacrificing on sample quality, purity, and crystallinity. Our as-prepared nanomaterials maintain fundamentally interesting size-dependent electronic, optical, and magnetic properties. In terms of applications, these nanostructures have wide-ranging utility in areas as diverse as catalysis, energy storage, biomedicine, computation, power generation, photonics, remediation, and sensing. 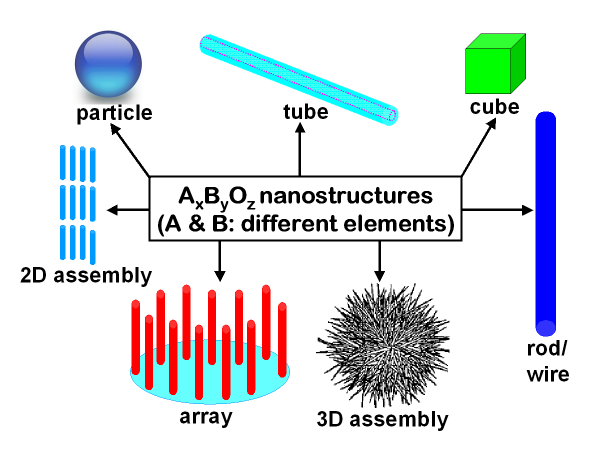 Despite increasing interest in the use of one dimensional (1D) noble metal nanostructures for the oxygen reduction reaction, there has been a surprising lack of effort expended in thoroughly and rationally examining the influence of various physicochemical properties of 1D electrocatalysts with respect to their intrinsic performance. In this area of the group, we have attempted to address this important issue by investigating and summarizing recent theoretical and experimental progress aimed at precisely deducing the nature of the complex interplay amongst size, chemical composition, and electrocatalytic performance in high-quality elemental and bimetallic 1D noble metal nanowire systems. In terms of these structural parameters, significant enhancements in both activity and durability of up to an order of magnitude in the case of Pt~Pd 1-xAu x nanowires, for example, can be achieved by rationally tuning both wire size and composition. The fundamental insights acquired are then utilized to discuss future and potentially radically new directions towards the continuous improvement and optimization of 1D catalysts. 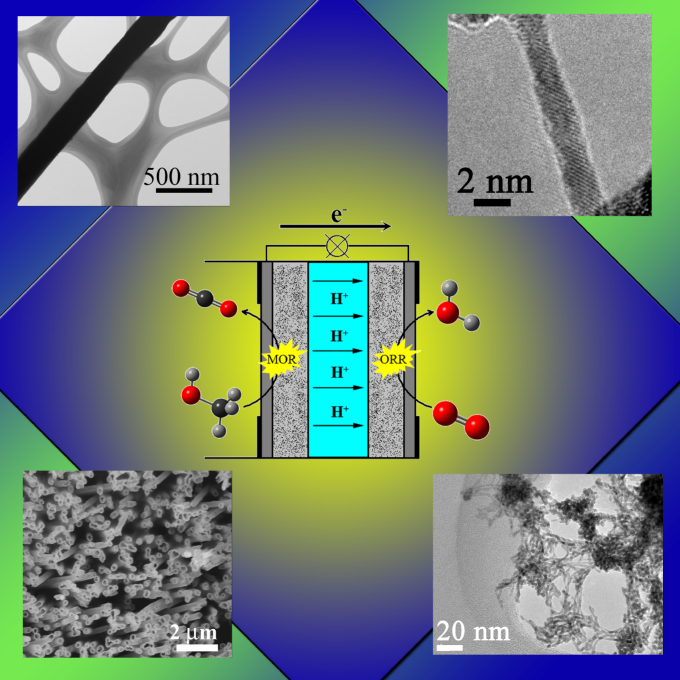 We have investigated the use of various morphologies, including nanoparticles, nanowires, and sea-urchins of TiO 2 as the semiconducting material used as components of dye-sensitized solar cells (DSSCs). Analysis of the solar cells under AM 1.5 solar irradiation reveals the superior performance of nanoparticles, by comparison with two readily available commercial nanoparticle materials, within the DSSC architecture. The sub-structural morphology of films of these nanostructured materials has been directly characterized using SEM and indirectly probed using dye desorption. Furthermore, the surfaces of these nanomaterials were studied using TEM in order to visualize their structure, prior to their application within DSSCs. Surface areas of the materials have been quantitatively analyzed by collecting BET adsorption and desorption data. Additional investigation using open circuit voltage decay measurements reveals the efficiency of electron conduction through each TiO 2 material. Moreover, the utilization of various chemically distinctive titanate materials within the DSSCs has also been investigated, demonstrating the deficiencies of using these particular chemical compositions within traditional DSSCs. 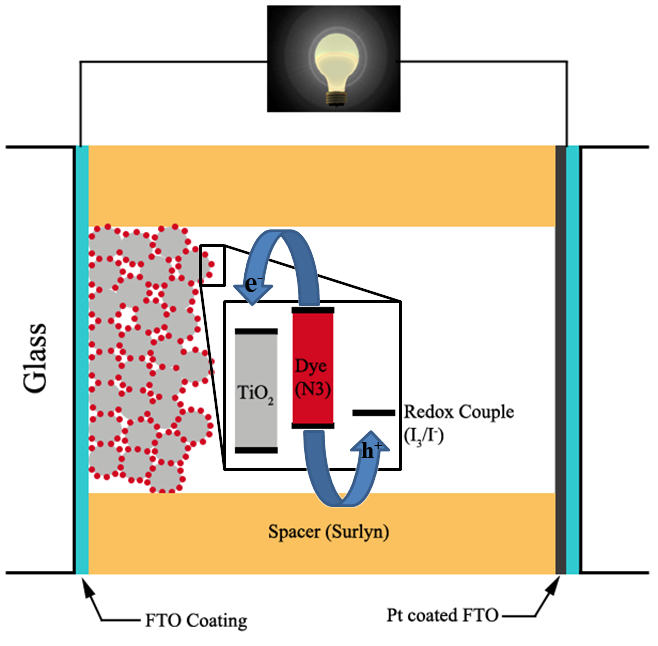 The use of any material for practical applications engenders risk. Frankly, even water itself can be fatal if misused. What is important is in understanding what constitutes acceptable risk. For nanomaterials, the key point is in determining whether a substance is inherently toxic and under what specific circumstances, it can be particularly harmful. In both cellular and marine studies, our group has found that the toxicity of a nanomaterial is often a function not only of its actual chemical composition but also of its particular structural morphology.