1.  A multifunctional one-dimensional (1-D) nanostructure incorporating both CdSe quantum dots (QDs) and Fe 3O 4 nanoparticles (NPs) within a SiO 2 nanotube matrix  has been successfully synthesized, based on a self-assembly of pre-formed functional nanoparticles allowing for control over the size and amount of nanoparticles contained within the composite nanostructures. What is distinctive about our specific nanostructure is that both the favorable photoluminescent and magnetic properties of QD and NP building blocks were incorporated and retained within the final silica-based composite, rendering it susceptible to both magnetic guidance and optical tracking. Moreover, the resulting, hydrophilic nanocomposites were found to easily enter into the interiors of HeLa cells without damage, thereby highlighting their capability not only as fluorescent probes but also as possible drug delivery vehicles, of interest to nanobiotechnology.

2. A simple and effective template-mediated protocol has been developed for the large-scale, room-temperature preparation of high-aspect-ratio, single-crystalline Tb-doped CePO 4 nanowires , measuring ~12 nm in diameter and over 10 microns in length. Moreover, we also isolated sheaf-like bundles of nanostructures. The synthesis mechanism likely involved a crystal splitting step. The resulting nanowires demonstrated an intense redox-sensitive green photoluminescence, which was exploited, in addition to their inherently high biocompatibility and low toxicity, for potential applications in biomedical detection and labeling of cells. 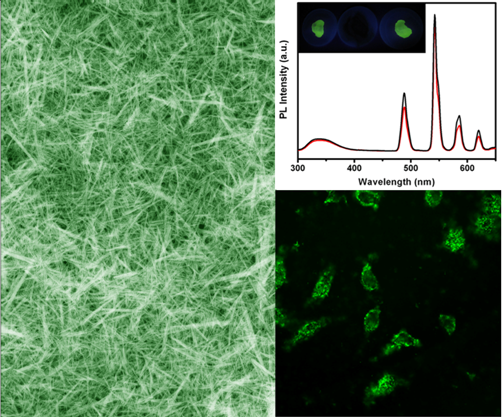