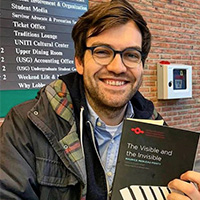 Where are you originally from?
I was born and raised on the eastern end of Long Island.

Why Stony Brook?
I applied to Stony Brook for my undergraduate studies last minute, not even thinking I would actually go. For some reason though, I decided to attend the first day of classes before making a final decision. That day, I attended a lecture by professor Justin Johnston (major shoutout!) that absolutely hooked me. I can’t remember the exact content, but I do remember that he was channeling some poststructuralist theory and discussing the gap between signifier and signified and the slippage that inevitably exists between what we intend to say and what we actually say. It was incredible and just blew my mind and I knew I had to stick around and learn more. So now here we are, one BA in English and one MA in philosophy later.

On his degree program:
I enrolled in the Philosophy and Art MA program because I knew I wanted to switch over to philosophy from English, which I studied as an undergrad. Although I started off treating it like a kind of transitional step in my journey, the program ended up being more than I could have ever asked for. The professors were engaging and challenging and the coursework was exhilarating.

Favorite Class:
It’s tough to choose, but I think my favorite class was PHI 505: “Text, Texture, Weaving,” taught by professor Megan Craig (another major shoutout!). During the course, we attempted both to think through texts according to the logic of texture and to think through textiles according to the logic of a text. It was a fascinating class and it really brought the typically abstract discipline of philosophy down to a hand-on, material level. In fact, we were even granted the opportunity to visit the Josef and Anni Albers Foundation, where we engaged with actual products of the art of weaving. It was just so inventive in terms of the syllabus and the course discussions were so captivating. I loved it!

Greatest achievement:
Given that I was born into and raised in a religious cult that forbids pursuing higher education (a story for another time), I think the fact that I’m now graduating with a 4.0 from a program in philosophy is pretty huge.

Plans for post-graduation:
I’ll borrow some words from the fantastically underappreciated author Richard Brautigan to answer this question: “he was leaving for America, often only a place in the mind.” In other, less poetic terms, I’m hoping to travel around for a bit and attempt to make sense of this country I call home.

Ultimately though, I think I want to go for a PhD in either philosophy or English. I’ve lately become enthralled with the world of critical theory, and I want to somehow translate that questioning philosophical disposition into praxis so as to change the face of the world. I guess I’ve always had an idealist edge to me.

Career aspirations:
I still haven’t figured out what I want to be when I grow up. Maybe a professor or maybe a political organizer or maybe even a writer of some sort. What I do know is that I’d like to somehow make a positive impact in the social sphere, no matter how minute.

Advice for future Seawolves?
The prerequisite for having good advice to give is having made and learned from a lot of mistakes. Given that fact, I could probably write a whole dang book of advice for others to follow. First of all (and at the risk of sounding cliche): carpe diem. Life keeps passing faster and faster as you get older, so take the time while you’re young to explore all of the options. Don’t just settle for what you think you should do or for whatever is expected of you. There are so many opportunities that I missed because I was too nervous to stick my neck out and try something new. But we don’t get a second go of this, so make the first and only one count.

More concretely: get involved! We can accomplish so little on our own but so much together. Try out all kinds of clubs and activities and events where you can meet and make connections with new people. And don’t be afraid to stick out, to make a fool of yourself if you have to. You’ll learn so much from it and in the end you won’t regret a single awkward second of it. The ones who’ll hold you to any of your blunders aren’t the ones you want around you anyway.

Favorite SBU memory:
Probably just walking on the train tracks with my friends late at night, talking about giving everything up to become poets or artists or whatever else. It’s always the little moments that we cherish the most. We can’t make them happen, but they do.

But if I had to stick to a more standard response—this is my way of cheating and giving two answers—I would say that my favorite SBU memory was receiving a standing ovation presenting my thesis. I took a really personal approach to the work I was doing at the time, and watching everyone standing and clapping was just a perfect sign that it all had paid off.

Parting thoughts:
I’m so thankful for the support I’ve received from all my Stony Brook professors. However, I have to single out professors Justin Johnston and Robert Kaplan, as the two of them made a huge and lasting impact on me during my undergraduate years. I also want to thank professor Megan Craig from my MA years for repeatedly wowing me with her syllabi and her ability to facilitate class discussions.