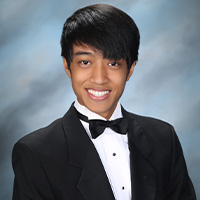 Where are you originally from?
I’m from a neighborhood of Brooklyn called Bay Ridge, but my parents are both from the Philippines, so I’m Filipino-American by culture.

How did you hear about Stony Brook University?
I first heard about Stony Brook through my guidance counselor, who suggested the school to me after I expressed interest in an affordable STEM education with a reputable humanities offering.

Why Stony Brook?
I was excited by Stony Brook’s manifold opportunities in STEM and in pure math in particular, as well as the school’s tuition compared to my other choices. I also enjoyed the diversity on campus, which I was sure would bring diverse perspectives in and out of the classroom, but especially in what would be my later courses that would emphasize peer-to-peer discourse.

On his major and minors:
I matriculated in Fall 2017 as a mathematics major. Thanks to great math teachers in high school, I enjoyed finding different ways, however abstract, to look at a theorem or a problem, because that helped me understand the motivation behind why we would care for something that was otherwise mostly theoretical. What made me stay in the major, however, came with my understanding that doing pure math wasn’t an isolated activity, but a social and collaborative effort. A lot of the later material in the semester can be hard to understand, and having a group of friends with whom you can bounce ideas off of was a key part of learning for me.

Along the way, I picked up an English minor. I found that the analytical mindset that I honed in my pure math classes, along with my perpetual appreciation for literature, lent itself quite well to an academic study under the Department of English. What I initially planned to be a fun elective, EGL 204 with Professor Pfeiffer, turned into an activated curiosity in the ways, however theoretical or not, we can look at literature to understand ourselves, others, and the world around us. Better yet, the diversity in the classroom ushered very unique perspectives on even the cosmetically simple parts of a poem or a play, which I truly appreciated in counterpoint to my math classes, which saw what peerwise collaboration there was outside the classroom.

Later on, I declared a Classics minor. I took LAT 111 and 112 with Professor DeRiesthal as another fun elective, but after finishing that course load, I realized that translating Latin was much more an analytical activity than translating any of Spanish, French, or Tagalog. Furthermore, Latin’s relatively loose syntax lent its literature to frequently creative and beautiful poetic sentence structures. These two aspects of my Latin academics led to an experience that really played to my “math side” and the “English side.”

Favorite class:
One of my favorite classes is actually a class I took this semester, EGL 301 with Professor Santa Ana, “Exploring Human and Nonhuman Relations in Literature and Film.” Here, we read contemporary novels from authors of diverse backgrounds through an ecocritical lens. With a combination of peer-led discussions on select parts of a book and small professor presentations introducing the work and a key concept in ecocritical theory, we reach a better empathetic and analytical comprehension of how the world around us, even the seemingly inanimate, brims with life and its many varieties, and how, through discourse, we might reform that more popular conception of nature, namely, of nature being inertly subservient to the wants and needs of Western society.

Interests and accomplishments:
I’m interested in pure math and in literature and culture, but I’m also interested in a very particular intersection of the two, namely the ways that we can “computationalize” approaches to things that are traditionally in the humanities. Among other things, I’ve been active on campus as a Lead Tutor for the ASTC for a year and a regular tutor a year before that, a secretary for the math club for my last two years, and a violinist in the University Orchestra during the spring 2020 semester.

Greatest achievement:
Honestly, my greatest achievement is probably being able to found and run a club during the pandemic. It took me three tries (over three years) to start up a quiz bowl club on campus, and when the club finally got approved in February 2020, we had to figure out not only what events we should regularly host and how to encourage others to come to our small, somewhat niche club, but also how much more difficult that might be online. We held twice-weekly practices and sent teams to several tournaments the last two semesters, including a novice tournament that saw us with a podium finish and a nationals tournament last April. Moreover, we house-wrote our own well-received high school academic tournament last summer consisting of hundreds of questions, and we plan to write a much harder pop culture tournament for this August. But that’s all to say: running a new club online isn’t an achievement I have done alone, but something I share with my past and present e-board members and all of our club members.

Plans for post-graduation:
My plans are to go to graduate school, but as a back-up, I feel prepared to take on technical writing-type jobs in the city.

Career aspirations:
In the long run, I hope to be a professor and do research on mathematically or computationally oriented problems, possibly in literature or cultural studies.

Clubs and organizations:
I’ve been the president of Stony Brook University Quiz Bowl for the last year and a half as well as the secretary of the Stony Brook Math Club for the last two years. Although I haven't had the chance to go back since the start of the pandemic, I’ve also been a lector at my local parish since 2012.

Advice for future Seawolves?
My best advice would be to try to get to know at least one person in each of your major classes early on, and all the better if they have roughly the same goals as you do! In a big school like Stony Brook, it’s really easy to just go to class and to just do the work, but doing things alone isn’t sustainably fun or engaging. Making several friends across your major can help broaden your perspectives on problem sets or readings and can make harder times like midterm weeks much more doable. Several peers that I got to know personally in my first year have become some of my closest friends by the end of my fourth year, and I wouldn’t trade anything else for it.

Favorite SBU memory:
Aside from the pandemic, I’ll probably remember all the fun chance encounters I’ve had with people while walking on campus. I remember seeing one of my math friends, Shiwen, at the gym and catching up with him after so many months. I also unexpectedly ran into a number of familiar faces while I was a part of the University Orchestra, who would later become my good friends elsewhere. I even remember some people from my first-year orientations that I’ve stayed connected with to this day through other things. These types of encounters aren’t exactly prone to happen with online classes, but it’ll be something to look forward to in the fall!