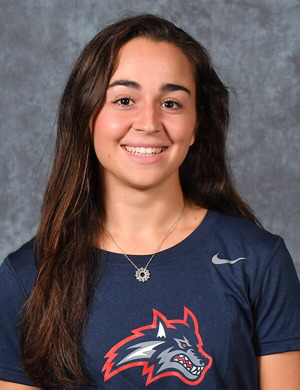 Being an international student as well as an athlete isn’t always easy, but Ana Carrion Rodriguez handles it like a pro! Ana came to Stony Brook from Spain, deciding to double major in Political Science and Spanish Literature after she was recruited for the Women’s Tennis team.

One of the things Ana appreciates most about her experience in the College is that the professors understand what it means to be a student athlete. Her team travels a lot, and her professors have always been sympathetic and willing to help her succeed. One of Ana’s  mentors is Professor Paul Firbas, Department of Hispanic Languages and Literature, who she says is one of the many people who has supported and led her along the way.  The continual support from her mentors has made it easier for her to demonstrate her academic capabilities (Ana has a 3.9 cumulative GPA) as well as her athletic prowess -- she held a two-year stint as the captain of her tennis team, helping to lead them to a conference championship.

In addition to tennis, Ana is involved in several other activities on campus. As a PACK mentor, she acts as a friend to incoming freshmen and is their first resource if they have any questions or problems. Ana is also part of the Academy of Leaders, for which she and a teammate meet with the Athletic Director once every two weeks to discuss issues and act as liaisons for the team. In addition, she is a Student Ambassador, allowing her to attend events and meet with many people, including President Stanley. She has worked as an intern in the Life Skills Office, facilitating events for incoming freshmen and transfer students who are interested in becoming involved in athletics. Lastly, Ana is a member of the Red Watch Band and Peer Athlete Wellness Seminar (PAWS) programs.

This summer, Ana has landed a position at a NIKE summer camp in England. Beyond that, she is still deciding is she wants to enter the workforce, or pursue a master’s degree.

Her advice for incoming students? “College is a place to develop and to grow - I know this sounds really cliche, but it’s true! It’s a place where you may face a little adversity, but it’s also a place where you can find a lot of support. I would encourage people to try new things, meet new people, go to events and clubs and get involved on campus. Live the full experience!”