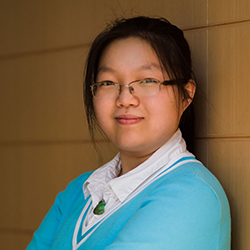 Ann Lin ‘18 first became interested in Stony Brook University when her high school AP Biology teacher, who had earned both bachelor’s and master’s degrees at Stony Brook, would constantly tell her class how much she gained as a student here. Today, Ann cannot help but agree that Stony Brook is her dream school.

Throughout high school, Ann always had a passion for science. She got involved in research early on, starting with the Cold Spring Harbor Lab’s Partners of the Future program, and at Columbia University, through its Science Honors Scholar program. Once she came to Stony Brook, it was not hard for Ann to choose Biochemistry as her major. She later realized her passion for economics upon taking courses to fulfill a general requirement; she soon added economics as a second major.

In her freshman year, Ann participated in the International Genetically Engineered Machine (iGEM) Competition, working with a team of other undergraduate scientists to try to find a cure for diabetes. They ended up winning a silver medal in the final competition. Ann has since spent a majority of her last two semesters working in labs, already co-authoring two papers on her findings on cancer biology. She’s also won several awards including the Sigma Xi Prize for Outstanding Research, the Provost Award for Academic Achievement, and the Academic Excellence Award.

Ann enjoys labs more than lectures, since she learns more from hands-on experience. “ I think it is awesome that SBU offers a variety of lab-based courses that allows students to see science in action,” she said. Not only was she offered unique research opportunities at top laboratories, she was able to attend conferences thanks to Undergraduate Research and Creative Activities (URECA) travel grants she received.

Outside of academics, Ann also enjoys hacking, and has won prizes at several hackathons thanks to her skills in developing and building apps, computer games, and websites.

Among other achievements, Ann received national recognition as a Goldwater Scholar, and made the list of “22 Under 22 Most Inspiring College Women” on hercampus.com. She recently received a fully-funded Fulbright Scholarship, and will conduct research at the University of Oslo in Norway this coming year. Her research will consist of developing an artificial human organ system that will accurately show the response of the human body to different drugs. She hopes to pursue a PhD in genetics.

For incoming first year and transfer students who are looking to study science, Ann suggests that they join a lab as soon as possible to take advantage of the numerous scientific opportunities offered. “ If you want to strive for success, SBU is the place to do it. Work hard, look ahead, and you will all do great things, future Seawolves.”