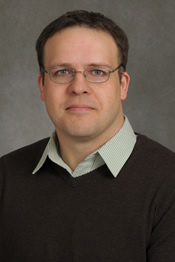 The French group is affiliated with several graduate programs:

We take a highly interdisciplinary approach to study the structure, function and control of enzymes and enzyme complexes involved in cellular metabolism. We are particularly interested in understanding how multi-protein macromolecular machines provide spatial and temporal control over metabolic pathways in cells. Our long term goal is to characterize the structure, functions and control mechanisms of these protein assemblies and to exploit this information to develop novel treatments for cancer and inflammatory diseases such as rheumatoid arthritis. To this end, we employ a variety of techniques including X-ray crystallography, mechanistic enzymology, microscopy and chemical biology. 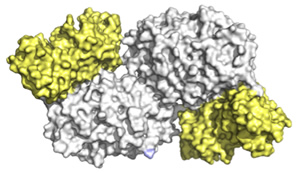 Many enzymes in humans and other eukaryotes catalyze multiple steps in metabolic pathways. These multi-domain enzymes are usually very difficult to characterize due to their inherent flexibility and large size. Often these proteins undergo significant conformational changes in response to ligand binding, post-translational modification or when interacting with other proteins. Understanding the structure of such multi-domain enzymes provides a significant opportunity for drug development. Enzymes involved in purine and pyrimidine biosynthesis are of particular interest as this metabolic pathway has been validated as an anti-cancer target (20% of all clinically approved cancer treatments are purine or pyrimidine anti-metabolites).
Structure of L. donovani OMPDC-OPRT

Structure and control of the purinosome

Recently, a multi-enzyme metabolic machine involved in purine biosynthesis was discovered. This dynamic and reversible protein complex, called the purinosome, forms when cells are depleted of purines and has been demonstrated to be a potential target for anti-cancer chemotherapeutics. We are investigating the structure and assembly process of this protein agglomerate and hope to use this information to understand how such phenomena may help control metabolism in cells. We are also interested in how such complexes may influence metabolic reprogramming in cancer cells.

HeLa cells grown in normal growth media exhibit a diffuse distribution of biosynthetic enzymes (left), but when purines are depleted from the media, the enzymes cluster into purinosomes.

Recent advances in detector technology and X-ray sources, including synchrotrons and X-ray free electron sources, has made it possible for crystallographers to collect large amounts of high quality data on vanishingly small crystals. One major bottleneck in the pipeline from sample to structure is the manipulation and harvesting of these tiny crystalline samples, something that is commonly done by hand. To overcome these limitations and to increase both the quality and throughput of data collection, we are developing novel acoustic-based tools to manipulate protein crystals. This biocompatible method uses surface-acoustic waves to move and pattern micrometer and sub-micrometer crystals in situ.

Our collaborator, Dr. Nick Carpino, recently evaluated mice lacking the Suppressor of TCR Signaling proteins, Sts-1 and Sts-2 for susceptibility to systemic C. albicans infection. In striking contrast to wild-type mice, which succumb to pyelonephritis within days of infection, Sts-/- mice were profoundly resistant to infection. The Sts proteins are characterized by a distinctive C-terminal histidine phosphatase domain, making them structurally and enzymatically very distinct from other phosphatases. Their singular enzymatic properties suggest they are attractive therapeutic targets. Along with our collaborator we are characterizing the structural determinants of function of the Sts proteins and working to identify inhibitors of the Sts phosphatase activity as probes of function and as the basis for drug development.

One of the long term goals of our research is to use our knowledge of the structure and function of enzymes and protein complexes to develop drugs to treat human disease. Using novel assays, we employ both conventional high-throughput methodologies as well as structure-guided approaches to identify, characterize and optimize lead compounds.