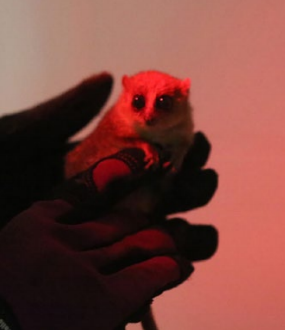 As the sun goes down over the cloud forest, most researchers are finishing dinner and getting ready for bed. One group, however, are just starting their day’s work. Haja and Mahery Razafindrakoto, Caitlin Karanewsky, and Zeph Pendleton don headlamps and go out to the forest with Victor Nirina Rasendry and Justin Rakotonjatovo to check on traps set that afternoon. The first GPS marked location they check is furthest from the field station, and they work their way back along the trail as they collect the traps. Most of them are empty, but some contain a small primate hiding at the back of the metal box, lured in by a generous slice of banana.

The mouse lemur, the smallest prosimian in the forests of Ranomafana National Park, may hold the genetic keys to understanding primate biology, behavior, conservation, and disease. It is for this reason that the Krasnow group ventures out into the dark each night in search of more data. Many genetic studies rely on manipulation or modification of the study species’ genes but, with many individuals and dozens of assays, it is possible to find naturally occurring mutations in relevant genes. Each lemur gets a full veterinary exam, a variety of blood tests, and a small biopsy of skin from the ear, which is used to grow their cells. The exams take an hour or two, then all the animals are released back into the forest, at the exact locations where they were captured. So far the team has identified dozens of animals with abnormal traits and has begun mapping the genes underlying these traits. The ambitious long-term goal is to examine all the mouse lemurs on the island!

In order to achieve such an ambitious goal, the Krasnow team has enlisted the help of Hanta Rasamimanana, Soatra Rakotonomenjanahary, and their ENS students at the University of Antananarivo to help teach hands-on science to high school students near the research station. This program is continuously expanding to more schools, and we hope that some of the students involved will become our future scientific collaborators.

As is so often the case in science, the Krasnow team made an unexpected discovery while conducting their study. Examination of the genomes of some of the individuals indicates that they belong to two separate species! This came as a surprise to everyone at Centre ValBio since the mouse lemurs at this field station have been studied for many years by many different researchers without any indication that they were not a single species. In fact, even the Krasnow team’s detailed phenotypic exams do not seem to reveal obvious differences. However, the mouse lemurs themselves must be able to distinguish between each other since they do intermingle but appear not to interbreed.

The Krasnow lab mouse lemur genetics project is ongoing and we are excited about uncovering the mechanisms by which these “super-cryptic” species distinguish themselves, continuing to identify individuals with unique traits and map the responsible genes and mutations, and further developing our understanding of the biology, behavior, and conservation of this fascinating primate. The team is very thankful for the help they have received from Pat Wright and from everyone at CVB. The project would not be possible without it!