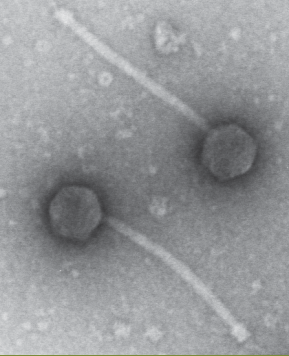 Bacteriophages – viruses that infect bacteria – are the most numerous biological entities in the biosphere. They are abundant and they are everywhere! They are highly diverse genetically, and we are keen to figure out what different types exist, what genes they carry, and how they have evolved. Furthermore, their ability to infect and kill specific bacteria presents therapeutic possibilities in which phages could be used to control antibiotic-resistant life-threatening bacterial infections.

Dr. Hatfull develops research-education programs in which students discover new bacteriophages, name them, purify them, and genomically characterize them. Over 17,000 phages have been discovered, 3,000 of which are genomically characterized. Their diversity is great, and they harbor hundreds of thousands of genes of unknown function. This is truly the dark matter of the biosphere.

With his colleague Debbie Jacobs-Sera, Dr. Hatfull is investigating if there are new and interesting types of bacteriophages in Madagascar, exploring its many novel and interesting environments. Working with Hanta Rasamimanana and her students from the Ecole Normale Supérieure in Antananarivo, ten new phages were isolated from Ranomafana using the bacterial host Mycobacterium smegmatis, and were given delightful names such as MalagasyRose, Antisirabe, and Curiosium. The genomes of these ten phages show them to have a number of interesting features, and MalagasyRose is unlike any of the previously sequenced 1,800 phages that infect exactly the same type of bacterium.

Every spoonful of dirt contains millions of individual bacteriophage particles, and there are so many more phages to be discovered and characterized. Phage discovery provides opportunities for students to engage in authentic scientific research and phage genomics promotes a deeper understand of genetics and molecular biology. The secrets of Madagascar phages are ready for investigation!