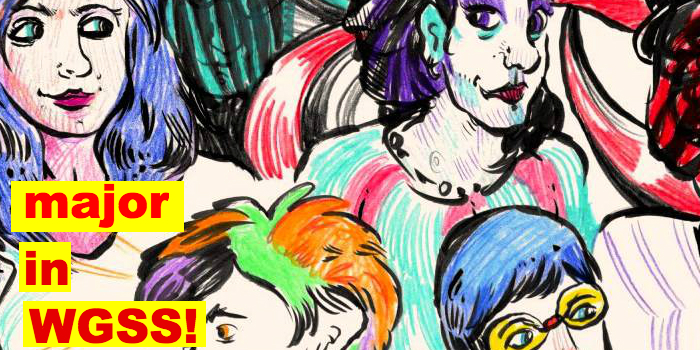 The major in Women's and Gender Studies leads to the Bachelor of Arts degree. No more than three credits offered for the major may be taken Pass/No Credit or Satisfactory/Unsatisfactory. All other courses for the major must be passed with a letter grade of C or higher. No transferred course with a grade lower than C may be applied toward major requirements. No more than three 100-level courses (9 credits) may be applied toward major requirements. At least 18 credits must be in courses numbered 300 or higher.  At least 12 credits must be WST courses (or cross-listed equivalent) taken at Stony Brook.
What Can I Do With This Major?  Click here to find out!
Completion of the major requires 36 credits.
A. Core Courses
B. Focused Studies
One course in each of the following categories (see Notes 1 & 2):

Twelve credits from WST courses. The following courses offered by other departments may also be used to satisfy this requirement (see Note 3):

*Topics courses are listed in blue*

2)  At least two WST topics courses (taught by WST-affiliated instructors) must be used to satisfy Requirement B.

3)  Any course listed as -or cross-listed with- WST may count as an Elective (Requirement C).  Other courses may count as qualifying electives if at least half the course content addresses issues concerning women, gender, and/or sexuality.  The Undergraduate Program Director can review a course syllabus to determine if the course qualifies as an acceptable Elective.  Availability of Elective courses depends on individual departments.

Students must present to the director of undergraduate studies a minimum of ten typewritten pages of formal writing, prepared for an upper-division course listed above as acceptable for the major requirements. This written work must have been judged by the course instructor to be satisfactory for the upper-division writing requirement in the field of Women's and Gender Studies. Normally this requirement is met through the work in  WST 408.

Students should consult with the department advisor to ensure that their plan for completing the Upper Division Writing Requirement is consistent with  university graduation requirements for General Education.  Students completing the Stony Brook Curriculum (SBC) must successfully complete a course that satisfies the "Write Effectively within One's Discipline" (WRTD) learning objective in order to graduate.  The Upper Division Writing Requirement is consistent in most cases with the SBC learning outcomes for WRTD .