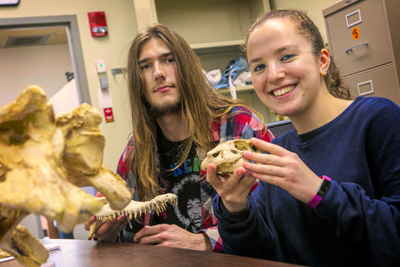 This month, URECA features and contrasts two students — both seniors, both engaged in undergraduate research under the mentorship of Dr. Alan Turner (Anatomical Sciences) whose focus is reconstructing large scale evolutionary patterns of therapods and crocodylomorphs.

Arthur Erb is a senior biology major who has long had an interest in paleontology and joined the Turner research group at the beginning of his freshman year. He presented a poster titled “ Braincase anatomy of the Paleocene crocodyliform Rhabdognathus revealed through high resolution computed tomography ” at the 2018 URECA campus research Celebration.  And at the start of 2019, Arthur presented his work on the "Braincase anatomy of the Paleocene crocodyliform Rhabdognathus"  at the Society for Integrative & Comparative Biology (SICB) 2019 Annual Meeting  in Tampa, Florida with support from a URECA Travel Grant. Arthur is currently working on a manuscript on his project. He is a graduate of Ward Melville HS in East Setauket, and plans to pursue graduate study in paleontology.

Olivia Taubenfeld  is an Honors College biology major with a concentration in Interdisciplinary biology who will graduate this spring, having completed her degree in 3 years. For about a year and a half, Olivia has been involved in research in Dr. Alan Turner’s research group, where she has become proficient in analyzing CT scans of crocodyliforms and will be developing a senior honors thesis based on her work. Olivia has also worked as a wildlife rehabilitation intern at Sweetbriar Nature Center (summer 2019) and as an intern at the Long Island Aquarium (summer 2018); she also is gaining experience as a veterinary assistant at Island Veterinary Group and has interned at Old Country Animal Clinic and volunteered at several animal shelters. She has served as event coordinator for the Pre-Vet Society, and as secretary of the Ballroom Dance Team at SB, and is a member of the Greater Long Island Running Club. She is a graduate of Plainview-Old Bethpage JFK HS, and plans to go to veterinary school.

Although their long-term goals vary, both students found their undergraduate research experiences to be a central part of their college experience and valuable preparation for their future careers. For Arthur Erb, the lab was a perfect match to his interests: “ Paleontology was a childhood interest – and I figured I’d be remiss if I didn’t follow through with it.” As a pre-vet student, Olivia Taubenfeld recalls “ wanting to do something with animals, whether that be from ancient times or the present…But I don’t think I’d ever imagined myself working with fossils!”  Below are excerpts from their interview with Karen Kernan, URECA Director.

Karen. How did you first get involved with research at Stony Brook?

Olivia. I was looking to get involved in research when I first got to SB. I wanted to do something with animals, ancient or modern, so when I was scoping out the websites of some the professors here and landed on Dr. Turner’s research with crocodiles and alligators, I thought, “That’s really cool. That’s something I’d definitely be interested in.” I eventually wrote to him and we discussed a project, and I will be building a thesis for Honors College off the work I’ve been doing.

Arthur. I knew I wanted to do something in the paleontology field before I even got to Stony Brook. And I knew that the only way I was going to get direct experience with that would be if I were to reach out to a professor here. I first reached out to Dr. Krause, who directed me to some of his colleagues, as he was about to retire. Dr. Turner’s research in therapods and crocs was very much something I was interested in, so I sent him some emails. When he didn’t respond  initially, I just knocked on his door one day and reminded him that I was very interested in the work he was doing – and we went from there.

Karen: Tell me about your current research.

Olivia. I’m working on CT scans of ancient crocodiles. I’m working specifically with 2 genera,  Notosuchus and Mariliasuchus crocodyliforms. By analyzing CT scans of ancient fossilized specimens, I am able to segment features of endocranial anatomies including various nerves and inner ear components. This information will allow me to develop points of comparison and contrast for identifying and explaining anatomical differences of these species while expanding my knowledge of their developmental and evolutionary histories. We can plot an evolutionary timeline of how these crocodiles developed. And we can ask: is this something similar to what these animals have today? Is this how animals will develop in the future?

Arthur. The goal is to advance our understanding of the neuroanatomical adaptations of this once more diverse group of animals. My project is essentially based around this one skull that’s really exceptionally preserved. It comes from Mali and is an ancient crocodyliform skull assigned to the genus Rhabdognathus. It almost looks like it hasn’t aged – because of how well preserved this skull is. On a segmentation software I am going through the scans and have essentially been working on a 3D reconstruction/approximation of what the entire internal cranial anatomy would have looked like.

Karen Do you see significant differences between ancient/modern crocs?

Olivia. Interesting that you bring this up! Last week I noticed something that I brought up to my professor. When I was looking for one of the posterior canals of the semicircular canals in the skull that’s characteristic of all crocodiles I’ve been researching, I actually wasn’t able to find it on one scan of the older specimens of Mariliasuchus. It was strange, and I kept getting confused while trying to map things out when I couldn’t locate the structure I expected to find. It turns out that the structure may have evolved much later than what was originally thought. It might not have even existed in that particular species. That was pretty cool!

Arthur. There were some pretty significant differences in my project as well. This skull I’m working on has an elongate snout. It almost looks like someone crossed a dolphin with a crocodile. The olfactory tract takes up at least two thirds of the brain…so its proportions are all out of whack compared to most of the croc brains.

Karen. How has being involved in research enhanced your education?

Olivia. I’ve probably learned way more than I thought I ever would have imagined about this subject. By doing research independently and coming up with a project, I think that takes you beyond the realm of a class. In class, you sit and listen to a lecture. You have to take the information for granted. What you learn is what is in the textbook. However, with a research project, you’re in control of how you want to learn things. Then, you can come up with these new discoveries. You are learning something not because someone just told you, but because you can actually see it and investigate yourself.

Arthur .  Classes provide fundamental knowledge or background material. But the experience we are getting in the Turner group gives you direct access to what actual scientists do. I’ve grown very familiar with just this one skull. And though the knowledge you gain may be somewhat obscure, just being the first person to see and to learn something that hasn’t been exposed to the rest of the world yet is something that I find to be very exciting.  The internal anatomy is something that we are the first people to see. To know what that is, and what the implications would be—and that we’ll be able to communicate to more scientists who can build off of that knowledge— it’s great to be a part of that.

Karen. What are your future plans?

Olivia. I recently applied to vet schools, and I think the particular research area I’ve been involved in has given me insight into medical imaging. Receiving this exposure to working with CT scans, even though it is with fossils and not live animals, is something that I think will be helpful in the future in the veterinary medical field.

Arthur. I’m right now looking at graduate programs. I am probably going to apply to do a master’s program first before doing a PhD.  I know that the type of work I’ve been doing with Dr. Turner—this is what I want to do in the future.

Karen. What advice do you have for other students?

Olivia. The hardest thing for me was getting involved. I emailed 15-20 professors initially, and I kept getting discouraged because I wasn’t getting responses. So my best advice is to keep going at it. Be the annoying undergrad that is diligent and never gives up. Just keep going for it. If you don’t get a response, it’s nothing against you. There may be too many undergrads in that lab, or maybe the timing is just wrong. You have to keep trying to get your foot in the door, and trying to talk to people in person.

Arthur. If you know what you want to do research in, then definitely be persistent and try to make direct contact with professors that you’re interested in. Faculty are going to be busy. You can’t take it personally if you don’t hear back right away. It’s harder for them to reach out to the students, than it is for the students to get in contact with them. It takes initiative on the part of the student. You have to keep trying. I did that, and it worked out really well for me!