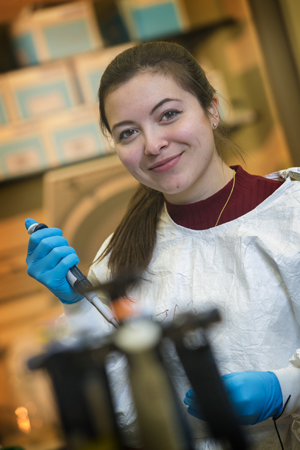 Gabrielle Paniccia is a senior in the Women in Science & Engineering program, majoring in Biochemistry. In her freshman year, she joined the laboratory of Dr. Laurie Krug (Molecular Genetics & Microbiology) where her research has primarily focused on using a CRISPR-Cas9 and CRISPR-Cas9N system to target and inactivate the oncogenic virus MHV68 in vitro. In summer 2017, Gabrielle participated in the SULI summer research program at Brookhaven National Laboratory, working in the laboratory of Dr. John Shanklin to study the effect of specific metabolic gene knockouts on triacylglycerol synthesis in Arabidopsis thaliana. Last summer, Gabrielle participated in Weill Cornell Medical College’s ACCESS program, working in the laboratory of Dr. Björn Kafsack to investigate an apparent link between lipid synthesis and epigenetics in P. Falciparum, the most virulent of the malaria parasites.

Gabrielle has presented her research at multiple venues, including giving a talk on “Investigating the role of S-adenosylmethionine synthetase in the growth and sexual differentiation of malaria parasites” at the Leadership Alliance National Symposium. She received poster presentation awards at both the Icahn School of Medicine at Mount Sinai Undergraduate Research Symposium (October 2018, New York, New York), and the Annual Biomedical Research Conference for Minority Students/ABRCMS (November 2018, Indianapolis, Indiana). She will be presenting her research in the Krug laboratory for a second year in a row at URECA’s undergraduate research symposium.  “Something that I’ve enjoyed about the research I’ve done is that, over time, I’ve been able to see myself grow as a scientist,” reflects Gabrielle.

At SB, Gabrielle has been active as a WISE mentor, and as editor in chief for Spoke the Thunder Literary Magazine. She also has been involved as a junior writer for Her Campus, Stony Brook Chapter and is an affiliate scholar with the IMSD-MERGE program. Gabrielle is a graduate of the C. Milton Wright HS in Bel Air, Maryland; and plans to pursue a Ph.D. in microbiology following graduation from Stony Brook University. Her hobbies include writing and photography. Below are excerpts from her interview with Karen Kernan, URECA Director.

Karen. How did you get first involved in research at Stony Brook? What is the main focus of your research?
Gabrielle. So I’ve been In the Krug lab for ~ 3 years now. Mainly,  I‘ve been working to develop a CRISPR-Cas9 system for targeting the mouse Gammaherpesvirus, MHV68,  in vitro . MVH68 is a model for KSHV and EBV, the 2 human Gammaherpesviruses, which are oncogenic and currently incurable. We want to create a system to block Gammaherpesvirus replication and reactivation by targeting a handful of critical genes--that’s the overall idea.
I first found out about the laboratory opening through the WISE program, in my freshman year. We would get these email blasts from the WISE program Director whenever a professor contacted her looking for a student. And when I first got the email, I was so excited because I thought: “This is exactly what I want to do!” So I immediately sent out an email to Dr. Krug, and we set up an interview in finals week – and then I started in the lab, right when I came back after winter break.  I was thrilled to get involved with the lab. And since then, I’ve stayed in the same lab.

How would you describe the Krug lab environment?
It’s awesome! It’s a really welcoming lab to be a part of. It’s been this second science family to me. We’re all friends. We always talk and hang out with each other.  And in general, I know that I can ask questions, get advice from the grad students, and no one is going to roll their eyes or dismiss me because I’m only an undergraduate. It’s a pretty awesome and supportive group.

What do you enjoy about doing research?
There’s a lot I enjoy! I definitely like when you finally see something come together…so for me, the process of actually learning science and being a student kind of came together in an interesting way. I’d realize, “Oh  that’s why I’m doing this….!” I’d get a bigger glimpse of the big picture of the project. Something that I’ve enjoyed about the research I’ve done is that, over time, I’ve been able to see myself grow as a scientist. I’ve moved from asking “What does this result mean?” to knowing how I want my experiments to proceed, which has been a really neat evolution.

How has research complemented your education?
The interaction with my classes happened really strongly this last summer when I was at Weill Cornell because I was looking at the metabolism of malaria parasites after having just finished Biochem2, a class which dealt with metabolism and the synthesis of a host of important molecules and co-factors. A lot of what I learned about enzymes in Biochem2 turned out to be critical for this summer’s research. It helped me sort of hit the ground running.

Tell me more about the Weill Cornell summer research project.
My project involved looking at an apparent relationship between lipid synthesis and epigenetics in malaria parasites. The form of malaria that infects people isn’t the same form that re-infects mosquitoes, and it seems as though the decision to differentiate into the mosquito-infecting form is driven by the availability of lipid precursors in the host. It’s like this molecular “egg timer,” where, as nutrients run out, epigenetic repression of a critical transcription factor is lost, triggering this differentiation and allowing the parasite to escape from the host. It was so neat working on it—and it was so different from anything I’d done before!

That sounds like a great experience...
It was neat-too because, at the end of the summer, the Leadership Alliance holds a symposium. (The Leadership Alliance is a network of R1 schools that encourages minority involvement in STEM. ) And that was my first experience giving an actual talk about my research. It was so cool. I got to meet so many people from different institutions--a lot of places I am considering for grad school. I actually ran into a bunch of Leadership Alliance people at ABRCMS and got to catch up with them, which was a great surprise.

And you had participated in a previous summer program as well, right?
Yes, the summer before that, I was in the SULI program at Brookhaven National Lab – working with Dr. John Shanklin. That was a really neat experience too – I got to learn a lot of cool techniques there  because I had access to this cutting-edge equipment that I honestly never thought I’d have the chance to work with.

Many of the summer programs have a final poster/research symposium at the end of the summer. Have you found that you enjoy the experience of presenting?
I really like talking to people. My parents were right in naming me Gaby because I do like to talk! I actually really like presenting research. In general, I’m interested in science communication. It’s been a goal of mine to get good at talking about my research. Because if you can’t talk about what you did in a way that people understand, it’s almost like you didn’t do it.
So I’ve been enjoying going to conferences, talking to scientists about what they’re doing. I went to ABRCMS, and the Icahn School of Medicine at Mount Sinai Undergraduate Research Symposium recently. And I’ve presented at URECA.... Sometimes having to explain how things work, let’s say explaining CRISPR-Cas 9 to someone who’s only heard the name before, has helped me really re-evaluate my understanding of some parts of my project.

What are the main advantages of participating in summer research programs?
Basically– just the fact that you’re doing research full time. No matter how much time you spend doing research during the semester – it’s still part time. You have distractions with school, and may need to cut back time in lab so that you can finish that paper or study for that midterm. But when you’re just doing research, and you are spending so much of your time not distracted by having to study for tests, it makes it a lot easier to improve. I definitely found that every time I come back from the summer, I know I’m way better in science that I was during the semester.

And your future plans?
I plan to get my PhD in microbiology. I’m really interested in pathogenesis, but I like viruses, so I think I’ll focusing on viral pathogenesis specifically.  Ideally I will go somewhere where I can study that.

What advice about research would you give to other students?
Definitely don’t be scared of it. It can sound intimidating when you talk to someone who has been doing research for a while. But even when you start out new, remember that you get to learn the laboratory and you get to learn with the laboratory. I came in as a freshman and had a long time to grow, so it worked out really well.

Looking back at work you’ve done, what are you most proud of scientifically?
There was this moment last spring when I was going through my data – and I saw that everything worked.  For the last 2 years before that, I had been setting everything up, making all of the constructs…and finally I got to put the numbers into GraphPad and realize that it works! It was a nice moment of vindication!

What has been most difficult as a student researcher?
On a purely physical level, the most difficult time I had in research was at Weill Cornell this summer. Malaria was the most demanding organism I’ve ever worked with—the parasites are actually surprisingly fragile, and if they grow too much, the whole population will just die off. I had to be in the lab 7 days a week to keep my cultures alive or set up experiments for the week. I’m not normally used to a schedule like that. So that was the most difficult challenge, having to form my life completely around science…but the upside is that I’ll basically be ready for graduate school. I know I can do it!

So you feel prepared for this next step?
Yes, definitely! I’m excited to go!