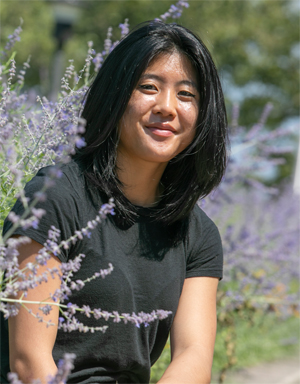 Giselle Maronilla was awarded URECA funding this summer to pursue her research under the direction of Professor Meta Brown (Department of Economics) on: “Intergenerational Mobility within New York State – Comparisons at the Tract  Levels.” With a focus on inequality and mobility characterizing NY State regional economics in the past 30 years, her project examines the decline of the American Dream, looking at variables including: parent/child household income, population density, employment rates, racial and gender shares, educational attainment breakdown, job density, etc. Applying econometric methods of data analysis using STATA to publicly-available datasets, Giselle was able to deepen her skills in economic data analysis, and her knowledge of an area she first learned about in her ECO 321 Econometrics course with her mentor, Prof. Brown.

Reflecting about just how much she learned about econometric theory and practice over the summer by immersing herself in this research topic, Giselle states:  “ You think you know something …but it’s like driving. You can read about driving all day but it’s not until you get on the road and start practicing and applying what you read that you really understand. Learning is so experience based, at least for me…”

Giselle is an Economics major (class of 2020) who has been active on campus as a University Scholars Fellow (TAing classes, assisting at Scholars program events), as well as a contributor to The Stony Brook Press. In addition, she has written and published articles on culture and technology as a summer intern at Spine Media in Manhattan. Giselle hopes to work on problems that involve data, society, and law in her future professional career.

Giselle Maronilla was born in Sao Paulo, Brazil, and graduated from Scarsdale HS in NY. Her hobbies include: boxing, brazilian jiu jitsu, baking and reading. Below are excerpts from her interview with Karen Kernan, URECA Director.

Karen.  What did you research this summer?
Giselle. I am studying rates of intergenerational socioeconomic mobility for the census tracts within NY State—basically, testing the vitality of the American Dream and its relevancy to today. Recent literature and research has provided compelling evidence to question that dream …So within the boundaries of NY, I used census data and statistical software and econometric methods to quantify and analyze the relationships between certain neighborhood characteristics of interest such as the share of single parents in an area, or the employment rate of an area. And I quantify the relationships of those characteristics to 2014/2015 inflation-adjusted earning outcomes for adults who grew up in those neighborhoods in the 80s. ...My research is econometric work – and the metrics part of econometrics means that I deal a lot with numbers and formulas and statistical theory. The econ part of it means that there’s a story behind the numbers. And for me that’s important and that’s exciting, and the story is local. It’s interesting because it hits home.

I grew up in a suburb in Westchester County which is a county known for its wealth, but lesser known for its relatively high rate of income inequality. ..Growing up there with a diverse friend group, I noticed community-based differences within our neighborhoods — such as the quality of K-12 education, the access to social networks for each of us. The circles of influence we have with our respective communities because of the demographics. You begin to wonder how those factors interact with each other and perhaps shape our outcomes in the future.

Have you found anything that particularly surprised you from your analysis and research so far?
Some of the factors that had the most weight statistically were not the ones people might normally think of, for instance measures of the local labor market such as the employment rate, the number of high paying jobs in the area, the annual job growth of the area. Those are important factors for the local labor market but some of the variables that really had a lot of pull in my models were the share of single parents in an area, the fraction of college graduate residents in an area. . . You start to realize that there are social factors at play that might be more important for issues of mobility that we should be paying attention to. The share of single parents was a variable that surprised me in its importance: even if your parents are married, if your community has a large share of single parents, that may effect on average your outcomes. Or at least correlate highly with your outcomes.

You’ve taken some classwork in Econometrics. How did the summer help you to learn & develop those skills?
The statistical software I used primarily was STATA. And it’s a really great tool but because it’s so fancy, it’s very tempting to start using all these tools and not go through the theory behind them. It’s so easy to code up formulas and methods without understanding what they’re doing to the data, theoretically. This summer, while I was focused on doing data analysis and applying it to a real world scenario,  I was also able to take a couple of steps back during the summer to make sure I understood the underpinnings of what I was working with.

I think that it is incredibly important while doing this type of work to be able to take the next step and ask:  why can’t this method work here?, or why can't I apply this Markov assumption to this data set? Having the experience of doing this research and looking at data on a real world problem, in addition to having the coursework I’ve had in econometrics, has helped me understand the theory a lot better. Finding a balance between really understanding the theory of the tools and applying them was a big takeaway from the summer.

Was it a challenge to have so much data to work with?
I got my data primarily from the Census Bureau. They have data sets that are accessible by the public. And yes, it was a lot..! But it helped having my mentor. She would guide me, saying maybe this variable isn’t of as much research interest or relevance compared to this one, etc.

Historically, the bulk of the research on this kind of field of socioeconomics has been primarily about income inequality, the distribution of income in a region. But there’s been more and more research recently on the intergenerational aspect of that – the persistence of poverty through time. I got a lot of my inspiration and a lot of my knowledge from working with my professor, and learning from her and from the work of her colleagues.

Tell me more about your mentor. How did you meet her?
She was my former Microeconomics professor, and then my Econometrics professor. I had been to her office hours a couple of times to ask about homework. I found her to be really helpful professor. I noticed that she cares about her students. And when I approached her about getting mentorship for the URECA summer program and asked for help to narrow down my topic, she was willing to help me. She gave me resources, she guided me…and the rest is history.

Did you know you would pursue Economics as a major when you first started at SB?
I came into SB as an English major. I love literature. I still do. And I love to write. I switched to Economics after taking ECO 108, the introductory course. You might think Economics & English are on completely different ends of the spectrum… but in both studies, you’re looking at relationships, between words, between variables, between settings and characters, factors and outcomes…Everything is all about relationships and trying to analyze those.

Do you feel you gained a lot from participating in URECA this summer?
Definitely. You think you know something {you might  think you know econometric theory after taking the class} ..but it’s like driving. You can read about driving all day but it’s not until you get on the road and start practicing and applying what you read that you really understand …learning is so experience based, at least for me, I realized this summer.

What advice about research do you have for other students?
Don’t be afraid to reach out to people for help, whether trying to get started, or if you even just have questions about getting into research. I’ve found in my experience that people are willing to talk to you and guide you in the proper direction as long as you approach people with sincerity, and you’re clear about what you need and are respectful…

Be ambitious, but also be humble. Don’t approach your topic as an expert but with curiosity... I think that will take you far.