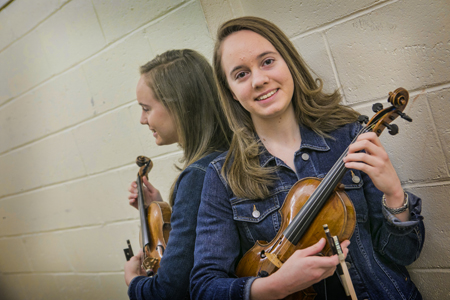 Nicole Soder is a senior in the Honors College who has made the most of her college experience! She is an Applied Mathematics and Statistics major/Music Theory minor who developed her skills in optimization, high-performance computing, modeling, and programming through her research experiences at Brookhaven National Laboratory (BNL) and the Institute for Advanced Computational Science, while also serving as a Teaching Assistant for the AMS department (for Operations Research and Applied Calculus). At the same time, Nicole is also completing a minor in Music Theory, and is the Concertmaster for the Stony Brook University Orchestra, which she has been a member of since 2015. Last spring, Nicole was honored with the Stony Brook Alumni Association’s Outstanding Future Alumni Award and also received honorable mention in the national Goldwater Scholarship competition. She is one of 14 SBU seniors who will be recognized later this month with the 2019 SUNY Chancellor’s Award for Student Excellence at a ceremony in Albany.

Nicole first began doing undergraduate research in the summer after her sophomore year as a participant in BNL’s Science Undergraduate Laboratory Internship (SULI) summer program (2017) where she worked with Dr. David Biersach over the course of 10 weeks to develop an algorithm to factor semiprimes, numbers that secure online data transactions in the RSA encryption method. She participated in the SULI program at BNL again the following summer and was selected to give a presentation to BNL senior scientists and staff at the closing ceremony in August 2018. Nicole is first author on a research paper,  “Assessing the Cryptographic Strength of RSA Moduli Using Algorithmic Entropy Reduction in Bivariate Polynomials”  based on this work (and published by IEEE XPlore through the Proceedings of 2018 New York Scientific Data Summit). Since October 2017, Nicole has also been involved in research at the Institute for Advanced Computational Science where she works on optimizing the speed and accuracy of Gaussian function calculations under the direction of Prof. Robert Harrison. This work is the basis for her senior thesis – which will be presented at the Honors College poster symposium on April 30. Nicole is eager to translate all the skills she has developed and learned from research experiences and classwork to date, and plans to begin her studies as a Ph.D. student in Operations Research at Columbia University after graduation.

On campus, Nicole has been active as a Peer Tutor and as a Commuter Assistant.  In addition to her music commitments to the Stony Brook Orchestra, she also has been involved as a lead violinist for the St. Louis de Montfort R.C. Church Choir, a connection she has had since 2010. Nicole is a resident of Long Island and graduated from Miller Place HS. Her hobbies include cooking and running. Below are excerpts from her interview with Karen Kernan, URECA Director.

Karen. How did you get first involved in research?
Nicole. I started in my sophomore year as an intern at BNL through the SULI summer program – a 10-week research internship where I worked with Dr. David Biersach. The purpose of my project was to develop a more efficient way to factor semiprimes, numbers that are the product of two distinct large prime numbers. These numbers form the basis of the RSA encryption method which secures many of our online transactions, such as emails. The primary approach my group and I took in factoring these semiprimes was through a theory called Algorithmic Entropy Reduction in Bivariate Polynomials. The method ascertains both prime numbers by determining if valid solutions can exist for a set of bivariate polynomial representations of the primes. It does so by moving leftwards from the least significant bit on the right-hand side to the most significant bit on the left-hand side …This project was my first introduction to high-performance computing. We used multiprocessing to double the speed of the algorithm and it was exciting to see how big of an impact it had on our project.

How big a transition was it, doing this type of research with no previous experience?
It was a pretty significant change. There were many new topics I had not been previously exposed to like encryption methods, Diophantine equations and clustering techniques. I learned a lot – and I really enjoyed the SULI program! I enjoyed it even more so this past summer because I was already familiar with many of the other interns and had the chance to expand upon the project I had already started.

Tell me about the project you’re currently doing in the Harrison group at IACS – the work that is the basis of your senior thesis.
I’m developing a software called MADNESS (Multiresolution Adaptive Numerical Environment for Scientific Simulation) which is a framework for fast and accurate computation primarily in chemistry, though it has also been applied to other fields. In particular, I’m working to improve the precision of localized orbital calculations which will in effect improve the performance of the overall program.

Is it related at all to the BNL work?  When did you get involved with this project?
The projects are pretty different but there is an overlap in the skills required for both projects. I initially looked online at the AMS faculty directory and reached out to a few professors. They were very excited to hear I was interested in research, but unfortunately didn’t have enough available space for an undergraduate at the time. Later on, I contacted Prof. Harrison, who is involved in research in scientific computing, a topic that I had started to learn about at BNL. It ended up working out great and I was invited to join the team. ... Even though I was a little bit intimidated at first, I quickly found out that Dr. Harrison is really nice and always willing to explain things. The PhD students are really great as well! They’re so willing to spend the extra time to help me if I need it—it’s a really supportive and inclusive environment that exceeded my expectations. They also have a great sense of humor, which makes it such a great group to work with.

How is the senior thesis going?  What for you has been most valuable about doing a thesis?
It’s going well! At this point, I’m wrapping it up – mostly working on the paper and the poster which I will be presenting in April.  Here and there, if I get the chance, I’m still trying to add to the research I’ve done already.
Working on a thesis has forced me to really keep track of every detail of what I’ve completed. It can be easy to forget some of the smaller, earlier steps when you’re involved in a long-term project. I find it helpful to take detailed notes so I can look back later and recall how those early steps fit into the project as a whole. Also, the requirement of writing the thesis has put me on a set timeline which helps me to make sure I’m always staying on track with my work.

Is there a lot of teamwork involved in the research experiences you’ve had? Or is most of the work done on your own?
It’s a bit of both. During my first summer at BNL, I worked on my research independently. The second summer, another student joined me on the project. It can sometimes be hard to work together when you’re coding but we took different roles whenever we could. My colleague would try one approach and I’d take the other and then we would compare notes. The project I’m working on now at IACS is very collaborative because we’re all looking to advance the same software. Even though the PhD students (Joel, Brian and Adrian) and I are working on separate projects, we help each other whenever we need feedback and are all working for the same common purpose.

What are your future plans?
This Fall, I will be starting my PhD in Operations Research at Columbia University…I’m still deciding on which track I’d like to do (I’m considering the financial engineering track) but I know that operations research is the general field I want to pursue. Operations research uses mathematical analysis to help businesses make better decisions and improve their efficiency in regard to time, money, etc. I’ve really enjoyed my research experiences and previous coursework and am excited to translate what I’ve learned so far to the discipline. Eventually, I hope to become a Quantitative Analyst and professor in the field.

How have your research experiences helped you prepare for graduate school?
It’s certainly helped me to gain experience in parallel computing, algorithms, optimization—all skills that are relevant to operations research. I’ve also been able to work on presenting by going to different conferences. I feel I’ve made major improvements in that area and have become so much more comfortable speaking in front of people.

What do you like most about presenting?
I get excited to share what I’ve learned with others. My BNL research was actually really fun to present because I think it’s important for people to understand how our encryption methods work. I definitely still get nervous before speaking—especially last summer, for instance, when I had to give a presentation in Berkner Hall to the other students and scientists. But practicing beforehand and preparing how I would like to explain the information really helps.

What advice do you have for students?
Get involved in research as early as you can. And if you reach out to a few professors and they don’t have the space, don’t be discouraged. Just keep looking until you find the right match. For me, the fact that I didn’t start in another lab right away ended up working out in my favor—it’s the path that led me to what I’m doing now which has really worked out for the best!
Being involved in research is definitely something I recommend to all students. It has had a big impact on my education as I go to my classes with more confidence now. And because what I’m working on in my research is often more difficult than my schoolwork, I think to myself, “It’s not so hard, I can do this!"