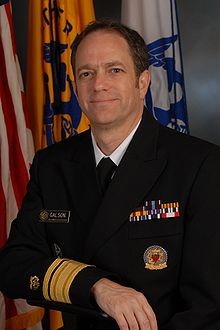 "Steven Galson retired as a rear admiral in the United States Public Health Service Commissioned Corps after 22 years of service.  He served as the acting Surgeon General of the United States from 2007- 2009. He served as acting Assistant Secretary for Health in 2009, and as the Deputy Director and Director of the Center for Drug Evaluation and Research at the Food and Drug Administration from 2001 to 2007. Prior to his arrival at the FDA, Galson was director of the Environmental Protection Agency's Office of Science Coordination and Policy, Office of Prevention, Pesticides and Toxic Substances. He has also served as the Chief Medical Officer of the U.S. Department of Energy. In 2014, he was appointed to the position of Senior Vice President for Global Regulatory Affairs and Safety at Amgen, and is responsible for all regulatory and patient safety functions across Amgen.  At Stony Brook, he was invited to give a Presidential Lecture in 2008, was named Distinguished Alumnus in 2009, and served the invited speaker at the Biological Sciences Commencement in 2013"