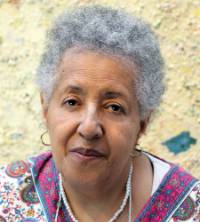 Howardena Pindell received an MFA from Yale University’s School of Art and Architecture in 1967 and a BFA in Painting from Boston University’s School of Fine and Applied Arts in 1965. She has two Honorary Doctorates, one from the Massachusetts College of Art in Boston Massachusetts and one from Parson School of Design/The New School University, New York She worked for 12 years at the Museum of Modern Art in New York and was an Associate Curator of Prints and Illustrated Books. She has taught at Stony Brook in the Art Department since 1979. She was a visiting Professor of Art at Yale University’s School of Art from 1995 to 1999. She has received numerous grants and awards including the Guggenheim Fellowship, two National Endowment for the Arts grants, a Joan Mitchell Grant, a Studio Museum in Harlem Artist Award as well as the Most Distinguished Body of Work or Performance Award in 1990 from the College Art Association. Her work is in the collection of the Metropolitan Museum of Art, New York, The Museum of Modern Art, The Whitney Museum of American Art, The Yale Art Museum, New Haven, The Fogg Art Museum, Harvard University, The Rhode Island School of Art Museum among many others. A book of her writings ” The Heart of the Question,” was published in 1997 by Midmarch Arts Press, New York.