The 90-piece Stony Brook Wind Ensemble is the department’s most “egalitarian” organization, welcoming undergraduate and graduate students, alumni, professional music teachers (some of whom have been former Broadway and Radio City Music Hall musicians), and members of the community. Performers have experience not only in classical music literature, but popular music and jazz as well. The programming of the ensemble is eclectic, featuring music of many tastes, including music written for the medium as well as transcriptions of orchestral music from Bach to Gershwin and popular music as well. Recent performances have included works by John Adams, Leroy Anderson, Harold Arlen, Bach, Berlioz, Brahms, Ferenc Erkel, Debussy, Dvorak, Duke Ellington, Gershwin, Morton Gould, Grieg, Mozart, Mussorgsky, Prokofiev, Rimsky-Korsakov, Richard Rodgers, Saint-Saens, Schumann, Tchaikovsky, von Weber, and Clifton Williams, among others. Invited guests, such as former New York Philharmonic Orchestra clarinetist Stanley Drucker, sometimes join the ensemble.

The Wind Ensemble has a history almost as old as the department itself. Previous conductors of the ensemble were Simon Karasick (former member of the New York Philharmonic and NBC Orchestra under Arturo Toscanini) and Jack Kreiselman (founder and director of the NYU Contemporary Players).

Conductor Bruce Engel was awarded the Brass Fellowship to attend the Julliard School of Music where he earned his Bachelor’s and Master’s Degree while studying trumpet and conducting. Mr. Engel has performed with the Bolshoi and Metropolitan Operas, the Goldman Band, the Winnipeg and Stuttgart Ballets and the American Symphony and New York Philharmonic. As an orchestral performer, he has performed under some of the world’s greatest conductors, such as Leonard Bernstein, Pierre Boulez, Thomas Schippers, and Leon Barzin. Internationally, he has conducted throughout Italy, France, Spain, Portugal, Greece, Austria and China.

Audition Information
All interested musicians can join wind ensemble and auditions, which take place after the first abbreviated rehearsal of each semester, are for seating purposes only. New members are required to audition and continuing members of the Wind Ensemble who want to be considered for higher seating may also re-audition after the first rehearsal. Auditions are brief, and include a piece of your choice that demonstrates your abilities as well as the sight reading of some relatively straightforward music. The first rehearsal is the first  Wednesday of classes, located in the Music Building,  room 0111, at 6:50 PM). 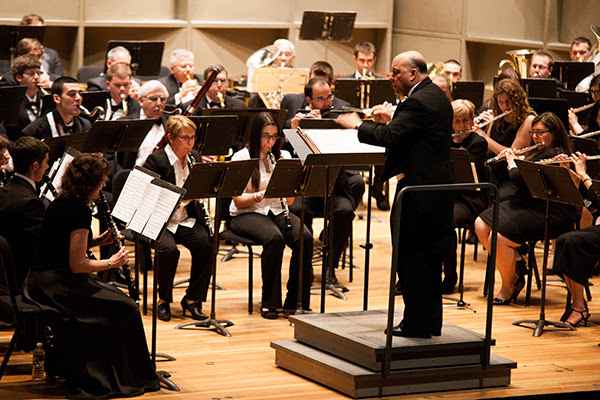