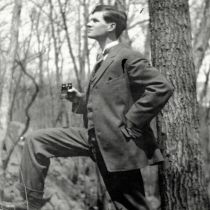 Provenance
This collection was donated by  donated by Alison Connor (daughter of Murphy) in 1975.

Arrangement and Processing Note
Processing completed by Special Collections in December 2005.
Finding aid and revised and updated by Kristen J. Nyitray in June 2019.

Restrictions on Access
The collection is open to researchers without restriction.

Rights and Permissions
Stony Brook University Libraries' consent to access as the physical owner of the collection does not address copyright issues that may affect publication rights. It is the sole responsibility of the user of Special Collections and University Archives materials to investigate the copyright status of any given work and to seek and obtain permission where needed prior to publication.

Historical Note
Robert Cushman Murphy (b. 29 April 1887, d. 20 March 1973), ornithologist, was born in Brooklyn, New York, the son of Thomas D. Murphy, a secondary-school official, and Augusta Cushman. In his early years the family moved to a rural part of Long Island, Mount Sinai, New York, to a home adjacent to Mount Sinai Harbor, where the boy, encouraged by his parents, took an interest in the local wildlife. He enjoyed going out with a local fisherman for bluefish, and he identified local birds. In 1906 he met Frank Chapman, curator of birds at the American Museum of Natural History, who hired him for a short time to proofread the galleys of his own book on warblers.

Murphy attended Brown University, where he received a Ph.B. in 1911. Earlier he had become acquainted with Frederic Augustus Lucas, then curator of the museums of the Brooklyn Institute of Arts and Sciences. Lucas appointed Murphy curator of birds and mammals at the institute in 1911 and arranged for him to sail, in 1912, as naturalist on a New Bedford whaling ship, Daisy, to the subantarctic. Murphy married Grace Emeline Barstow shortly before that one-year trip; the couple had three children.

The whaling trip gave Murphy an opportunity to observe and collect oceanic birds. During its stop of almost four months for elephant seals on South Georgia Island, he obtained specimens of penguins, other birds, marine mammals, and plants, which were all to be deposited in the American Museum of Natural History.

On his return Murphy continued at the Brooklyn Institute, where he became head of the Department of Natural History in 1917. That year he also received an M.A. in zoology from Columbia University. In 1919-1920 he visited Peru for several months to observe the guano-producing birds of the offshore islands.

In 1921 Murphy became associate curator at the American Museum of Natural History, advanced to curator of oceanic birds in 1926, in 1942 became chairman of the Department of Birds, and in 1949 was named Lamont Curator of Birds. His first book was Bird Islands of Peru (1925). He organized an expedition to collect oceanic and coastal birds under the leadership of Rollo H. Beck. Murphy's next scientific book was on these large collections, The Oceanic Birds of South America (2 vols., 1936), which his biographer Dean Amadon calls "noteworthy for its remarkably readable style." The scholarly treatise included the effects of climate, currents, and land masses on the distribution of oceanic birds, as well as general natural history and a detailed account of each bird species and its habits, illustrated with photographs, color plates, and maps. The book was awarded the John Burroughs Medal for excellence in natural history writing and the Brewster Medal of the American Ornithologists Union.

In 1932 Murphy, assisted by his wife, cataloged and shipped to the United States the very large collection of birds (280,000 specimens) accumulated by Lionel Walter Rothschild in England; it had been sold to the American Museum of Natural History in 1931. Many details about the collection were known only by Rothschild, so compiling the 740-page catalog and the packing took the couple four months. Murphy was general manager of the Whitney South Sea Expedition that operated for about a decade from 1935 on the schooner France, although he was never able to join it himself. He was under pressure at the museum to study the new collections quickly, and he was much aided in this by biologist Ernst Mayr, a scientist destined for great eminence.

The family of philanthropist Harry Payne Whitney donated funds for a new wing of the museum for the growing collections of birds. Murphy was extensively involved with the supervision and construction of the Whitney Memorial Hall of Oceanic Birds. He often helped create other exhibits for the museum and as a popular lecturer there contributed to a rising interest in conservation. In addition he traveled extensively: to Baja California, Mexico, Peru, and Ecuador three times, the western Mediterranean, the archipelago of Las Perlas off Panama, New Zealand, and the subantarctic region three times, and the Caribbean area several times. He obtained many new specimens and considerable scientific information on habits and habitats of birds. According to Mayr, "With iron self-discipline, no matter how strenuous the day, he recorded his daily experiences in considerable detail in a diary, an extraordinarily valuable record considering the drastic changes all of these places have experienced since then."

After retiring from the American Museum of Natural History in 1955, Murphy maintained an office there for some years in an emeritus capacity. In 1960 he was representative of the National Science Foundation and biologist on the icebreaker Glacier in the Antarctic, and in 1970 he revisited South Georgia Island, which he had last seen in 1912.

Through the years he published nearly 600 articles in scientific journals and in popular magazines, including Natural History, National Geographic, and Scientific Monthly. In 1947 he published an account of his 1912 whaling voyage as Logbook for Grace, derived from his original diary and letters to his wife. Well written, it primarily represents Murphy's acceptance of the already declining whaling industry and his own enthusiasm for gathering information on subantarctic birds and mammals. In A Dead Whale or a Stove Boat (1967) he presented photographs of whaling that he had taken and developed during the 1912 trip.

Murphy was an early conservationist who concentrated his continuing efforts on Long Island, New York, where he and his family lived for many years. He was the first president of the Long Island chapter of the Nature Conservancy, which obtained natural habitat locally for preservation, and he was an adviser on the Fire Island National Seashore. His book on the region, Fish Shape Paumanok: Nature and Man on Long Island, was published in 1964. Having become well aware of the decline in whale populations through the years, he also participated in efforts to save them.

Murphy received the Daniel Giraud Elliot Medal of the National Academy of Sciences in 1943 and other scientific honors. He died on Long Island in 1973. (Source: American National Biography)

Box 23
Total envelopes: 36 (number of envelopes per subject in parenthesis)