A Timeline History of the University Libraries

This photograph taken in 1969 captures the beginning of the expansion project on the Melville Library.
The construction took place between 1969 and 1971 - and amazingly, the library never closed!
Source: University Archives, SBU Libraries.

1948: New York State adopts the State University of New York system. This system links 31 state-supported campuses. Most are teacher-training schools, with a total of 28,300 students. Today, the SUNY system is comprised of 64 campuses.

William Robertson Coe presents his 400-acre Long Island estate, located in Oyster Bay and called Planting Fields, to New York State for use as a school of horticulture after his death.

1957: The State University College of Long Island at Oyster Bay opens on September 16, 1957. Planting Fields in Oyster Bay (New York), given by the late William R. Coe to the State University of New York, was the site of the college until the permanent campus at Stony Brook was completed.

There are 144 first-year students and 14 faculty members. 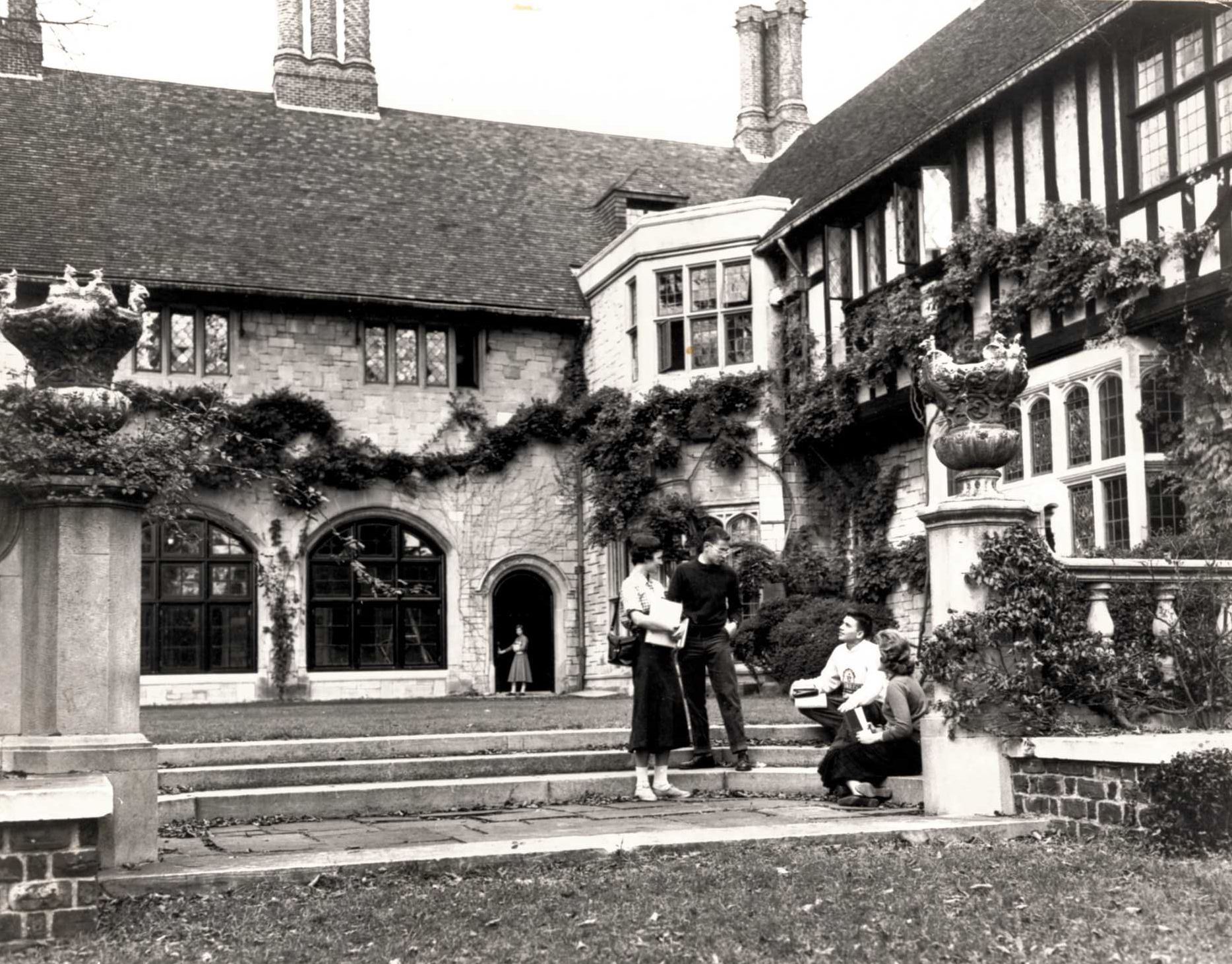 1957: The first library space opens on the main floor and mezzanine of Coe Hall. 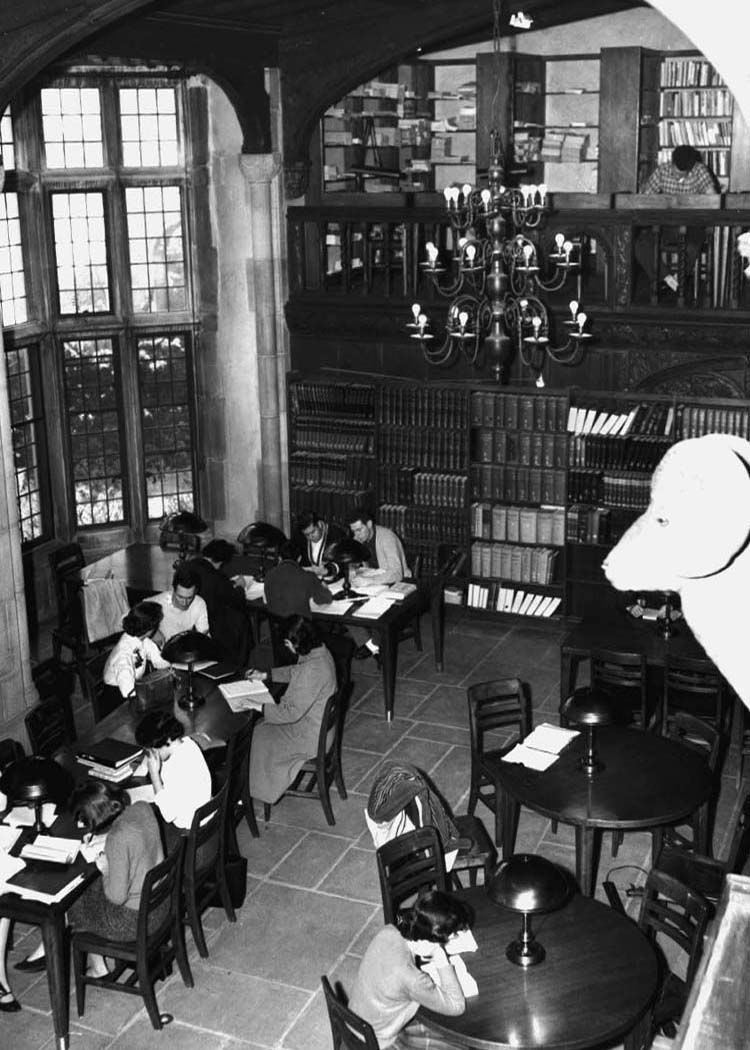 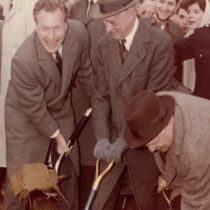 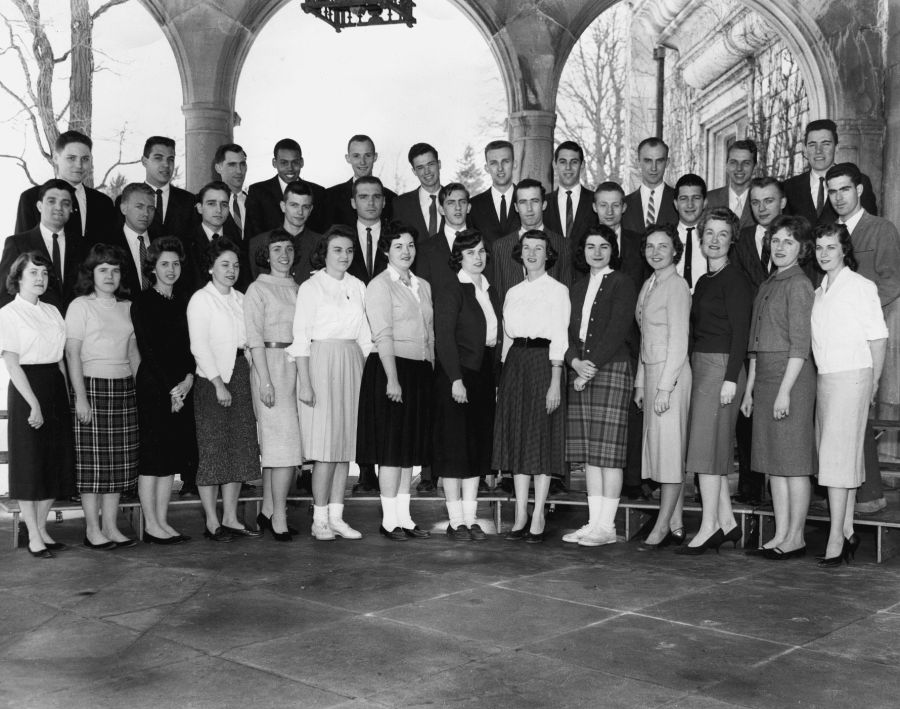 
THE MOVE TO STONY BROOK

1962: While some classes and laboratories continue at the Oyster Bay campus for a fifth and final year, the new Stony Brook campus opens. It is known as the State University of New York at Stony Brook (SUNY at Stony Brook).

There are two completed academic buildings: Humanities and Chemistry. Most classes are held in the Humanities building. It also has a single dormitory, G Dorm, which accommodates 616 resident students. G Dorm also houses the administrative, athletic, student government and newspaper offices, and the infirmary. 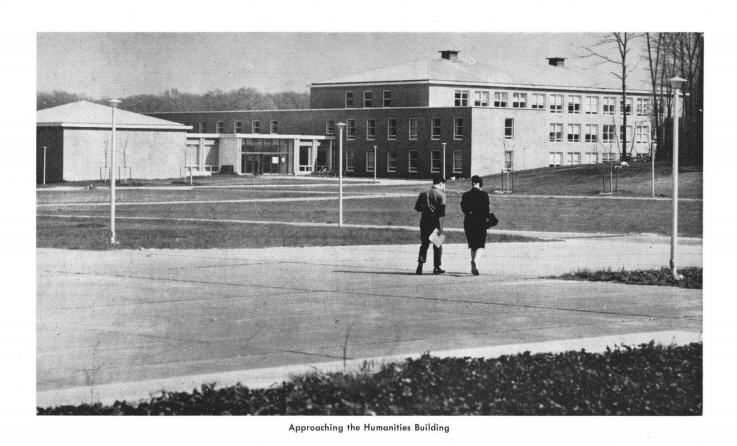 The library building was under construction; goals were have seating for 750 people and to house 350,000 volumes. It was equipped as an open-stack library, with carrels, study rooms, projection and music rooms.  The number of subscriptions for periodicals in Physics, Chemistry, Engineering, and Mathematics was about 500 titles. 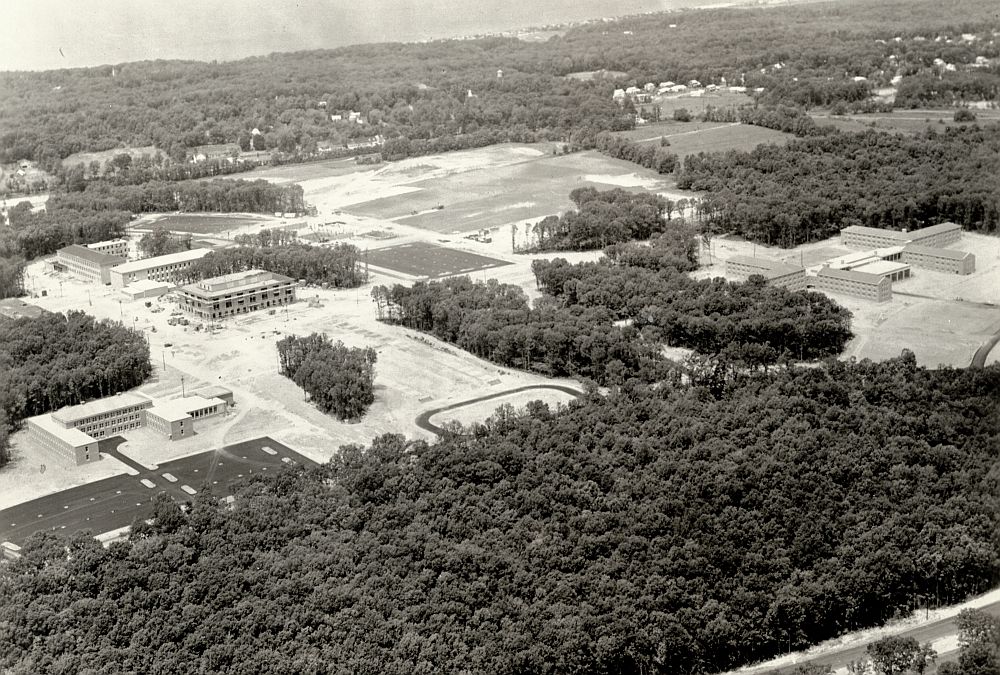 1963: The original library on the Stony Brook campus opened in July 1963 with seating for 700 students. The architectural firm of Damaz, Pokorny, and Weigel designed the modular library. In modular design, new sections can be  created and function independently. The intent was to eventually increase the footprint of the building to keep pace with the university’s rapidly expanding programs and growing enrollment. 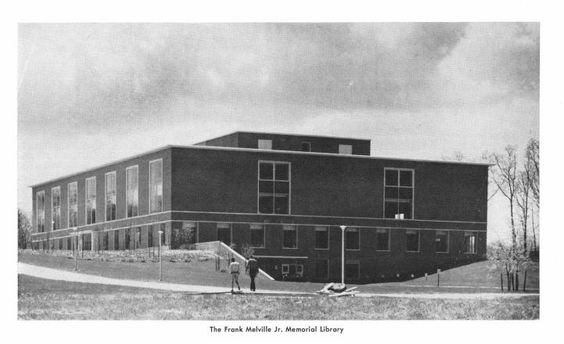 1965: The library was touted as an "air conditioned structure."

It had a print collection of 100,000 volumes and was a selective government depository and received large numbers of publications issued by the U.S. government. The library also had recordings of music as well as records of speeches, poetry, and drama.

About 2,000 periodicals were received covering all areas of knowledge, and the staff processed books at the rate of more than 20,000 per year.

There were plans for a music library to occupy a portion of the first floor. According to the 1965-1966 Undergraduate Bulletin, "The latest electronic equipment will be installed, including the use of tapes and cartridges operated by remote control under the direction of a music librarian and a skilled electronics engineer. The plan of the building is based on the module so that its function will be flexible and changes can be made in the interior plan when desired. This building is intended as the first part of a large structure that will ultimately store a million volumes and will serve a student body of ten thousand. Until the completion of an administration building, the Melville Library will house the administrative and business offices on one half of the second floor." 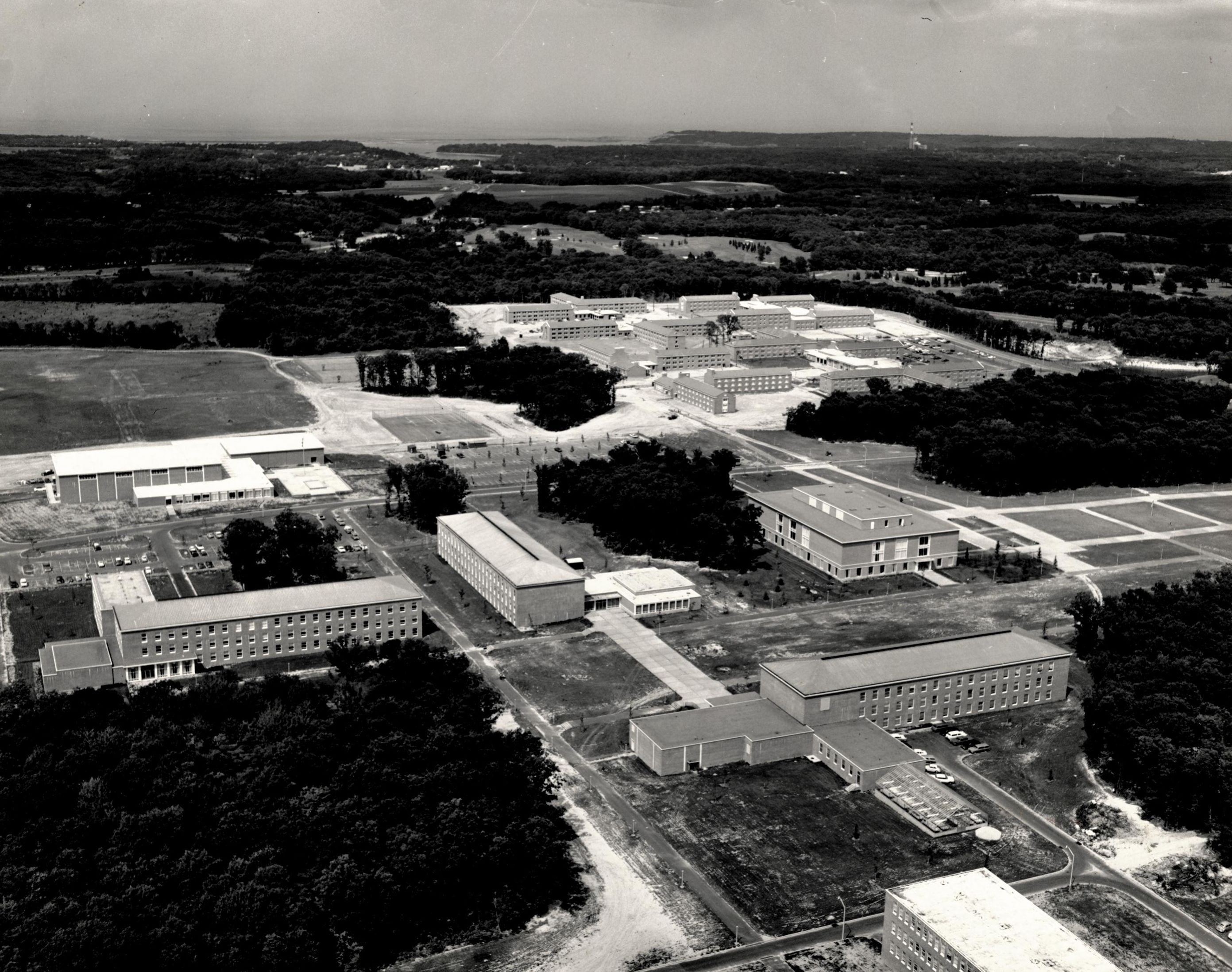 Aerial photograph of the Stony Brook campus, c1965. Can you locate the original Library?
(Hint: The present-day Frey Hall is located in the center of the photograph).
Source: University Archives, SBU Libraries. 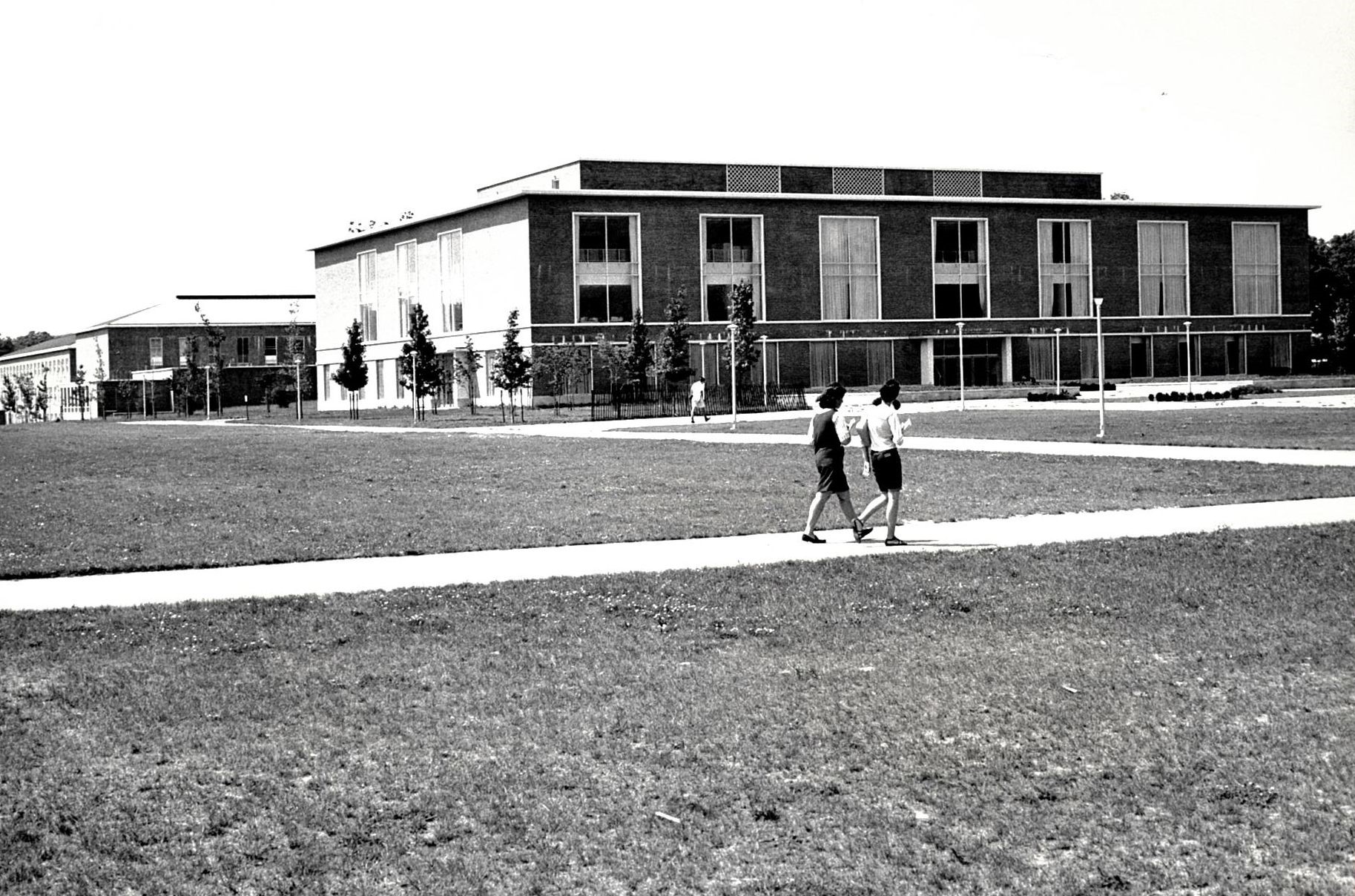 Walking along the east side of the Library, c1965.
The original Chemistry building (now Frey Hall) is pictured in the background.
Source: University Archives, SBU Libraries.

1966: Seminar rooms and soundproof "typing rooms" were available in the Melville Library. There was a special room for the housing and use of microform equipment, including reading machines for microfilm, microcards, microprint, and microfiche and a microprint reader-printer. A photocopy machine was available for the purpose of copying pages from magazines and reference books.

THE BRIDGE TO NOWHERE

1967:  Gruzen and Partners designed the large pedestrian bridge to connect Fine Arts, the Student Union, and the Library, fondly known as the Bridge to Nowhere, because it did not connect to the Fine Arts building for nearly 10 years after ground was broken.

The course bulletins state "a second unit of the library, which will increase its capacity by two and one half times, is now in the planning stages. It is expected to be occupied by 1970." 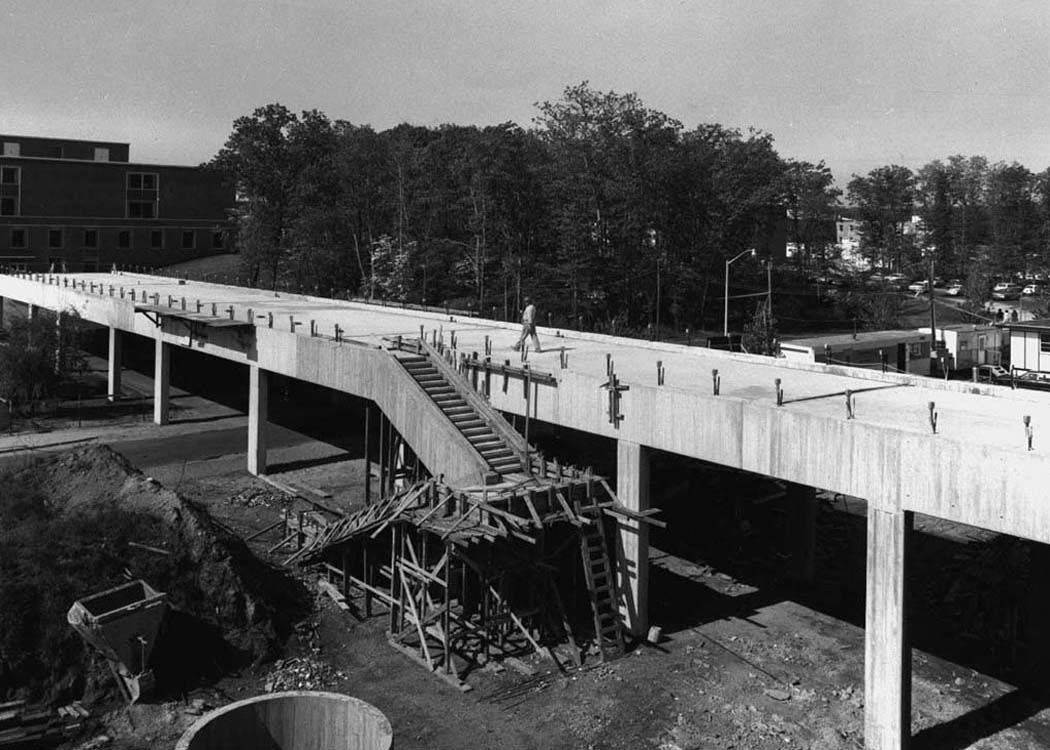 The Bridge to Nowhere, c1968. The original Library building is pictured on the far left in the photograph.
Source: University Archives, SBU Libraries.

1968: The university states the library constitutes the first phase of a larger structure that will house a million volumes at its next stage of development.

Four scientific collections are housed in the science and engineering buildings.

During regular semesters the Melville Library is open until midnight except on Saturday.

Small study rooms are provided in the Melville Library. A special area houses the files of microfilm, microcards, microprint, and microfiche.

A Xerox copier is available for student use.

Also in 1968: a "Biomedical Library" housed in the Blue Jay Market in Setauket (on 25A) was established to service to the community. It would open shortly after the arrival of the Director of the Biomedical Library, Emil Frey. It was stated: "The library will also function as a regional resource for the entire Nassau-Suffolk community. It should be able to serve physicians, other health professionals and hospital libraries with materials, consultation and eventually computer hook-up."

1969: Architect Ervin Galantay transformed the existing library into one of the largest and most imposing buildings on campus.

A glass atrium would connect the original building to the new areas of the building. 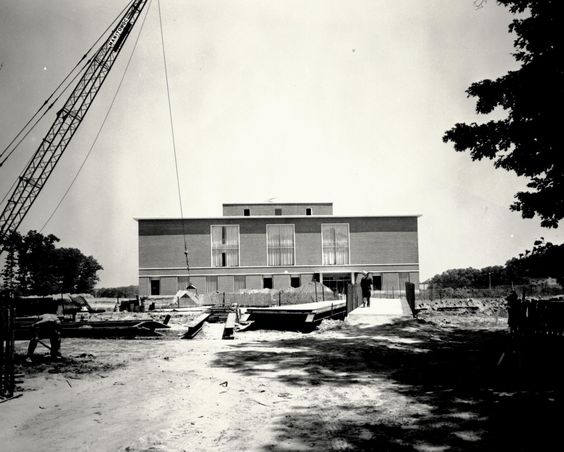 Also in 1969: Emil Frey is recruited as director for the Health Sciences Center Library.

The Special Collections department is established.

A million volume collection was anticipated by 1975 after completion of a library expansion program now underway.

Specialized libraries were also maintained on campus. These include the chemistry, earth and space sciences, health sciences, physics-mathematics and engineering libraries. 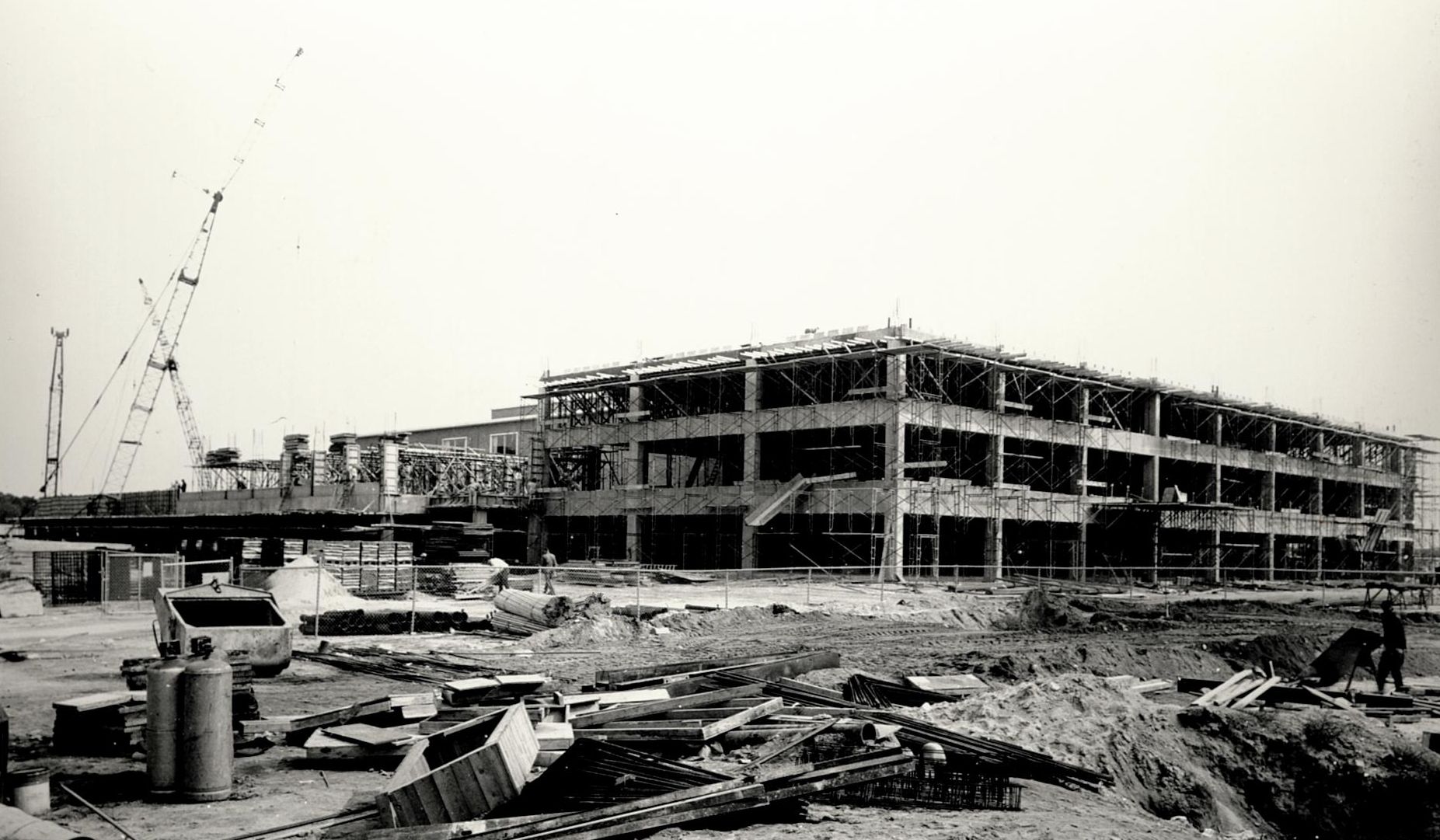 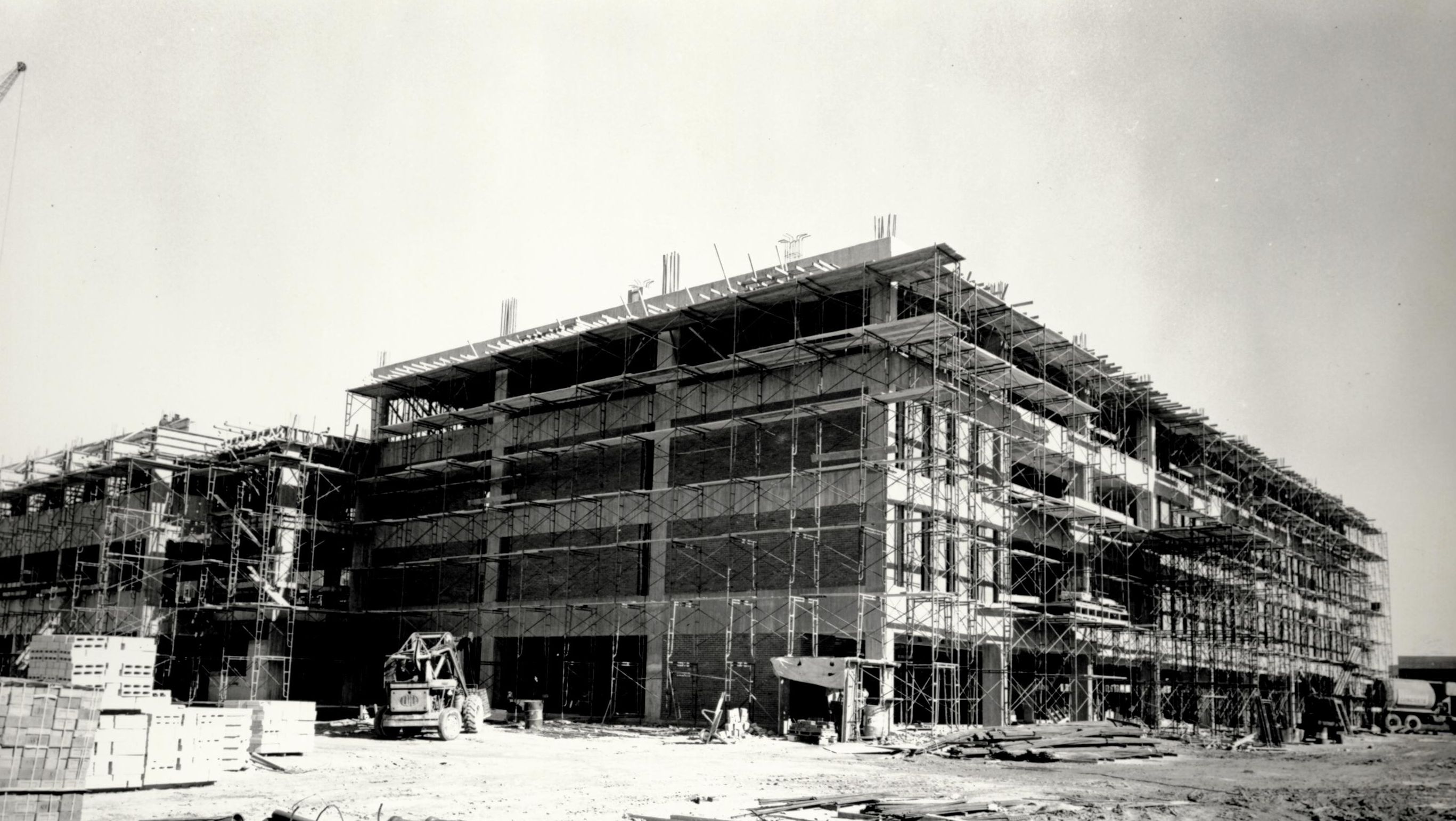 1971: After a major expansion which nearly quadrupled the square-footage, the library reopens with signage “Frank Melville Jr. Memorial Library” installed on the exterior, in honor of Stony Brook philanthropist Ward Melville’s father. 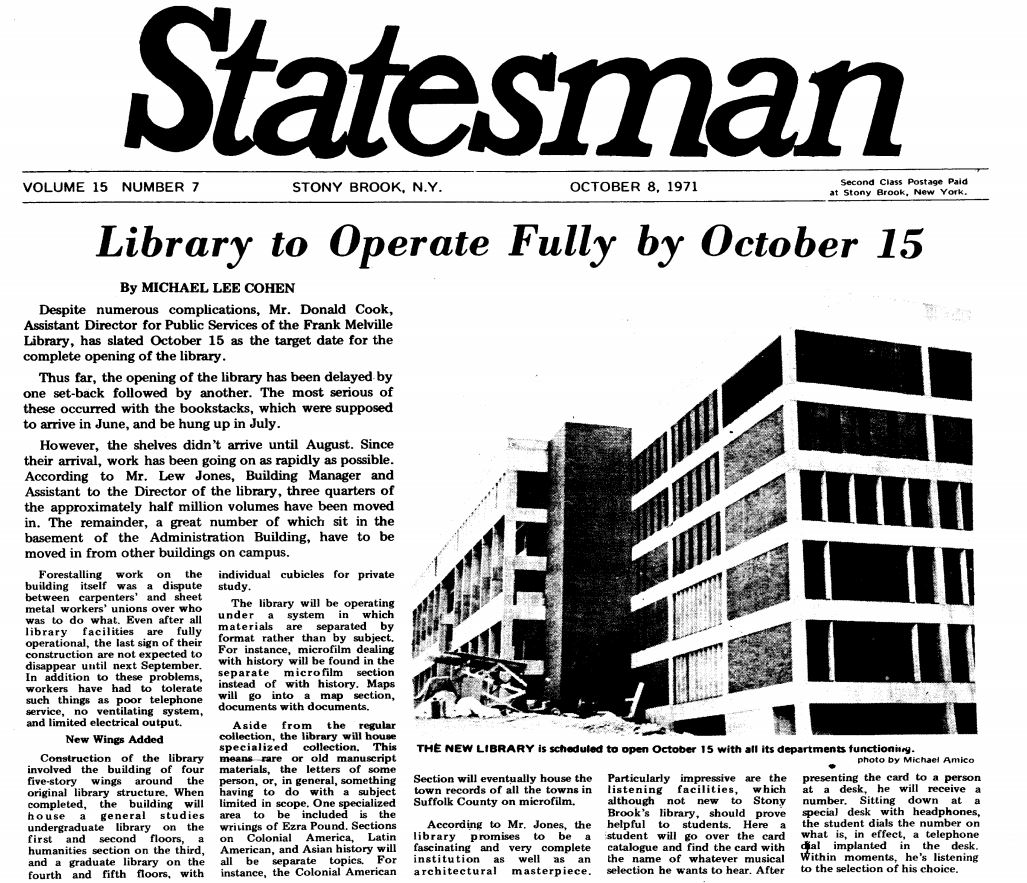 The first phase of the new building, located in the heart of the campus, was completed in the fall of 1971, while final occupancy of the entire "Library-Humanities Building" was scheduled for fall, 1972. 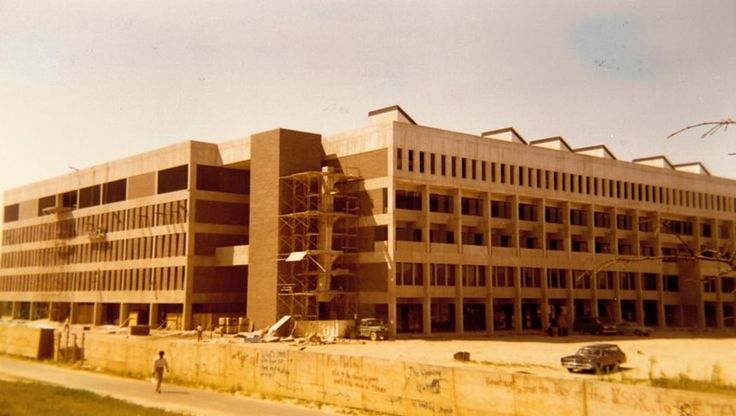 Among specialized departments within the main library building were: microforms, consisting of 24,000 reels and 750,000 flat units; the Music Library and listening facility; the United States, United Nations and New York State Documents Section; the Environmental Information Service; and the Department of Special Collections. 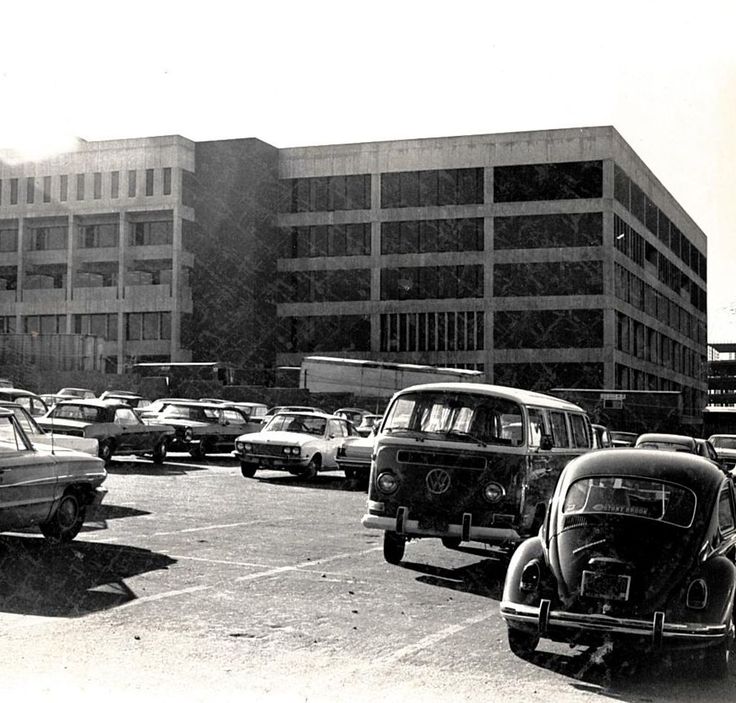 Before the days of parking permits and the Staller steps: cars parked outside of the Melville Library, c1971.
Source: University Archives, SBU Libraries.

Separate chemistry, earth and space sciences, mathematics, physics, and engineering departmental libraries, located in their respective academic buildings, were under the jurisdiction of the main library.

The 1974-1975 Undergradute Bulletin states, "The Frank Melville, Jr. Memorial Library, at the heart of the campus, and its six departmental branch libraries have a total of 785,000 volumes, 800,000 items in microformat and subscriptions to 6200 periodicals." 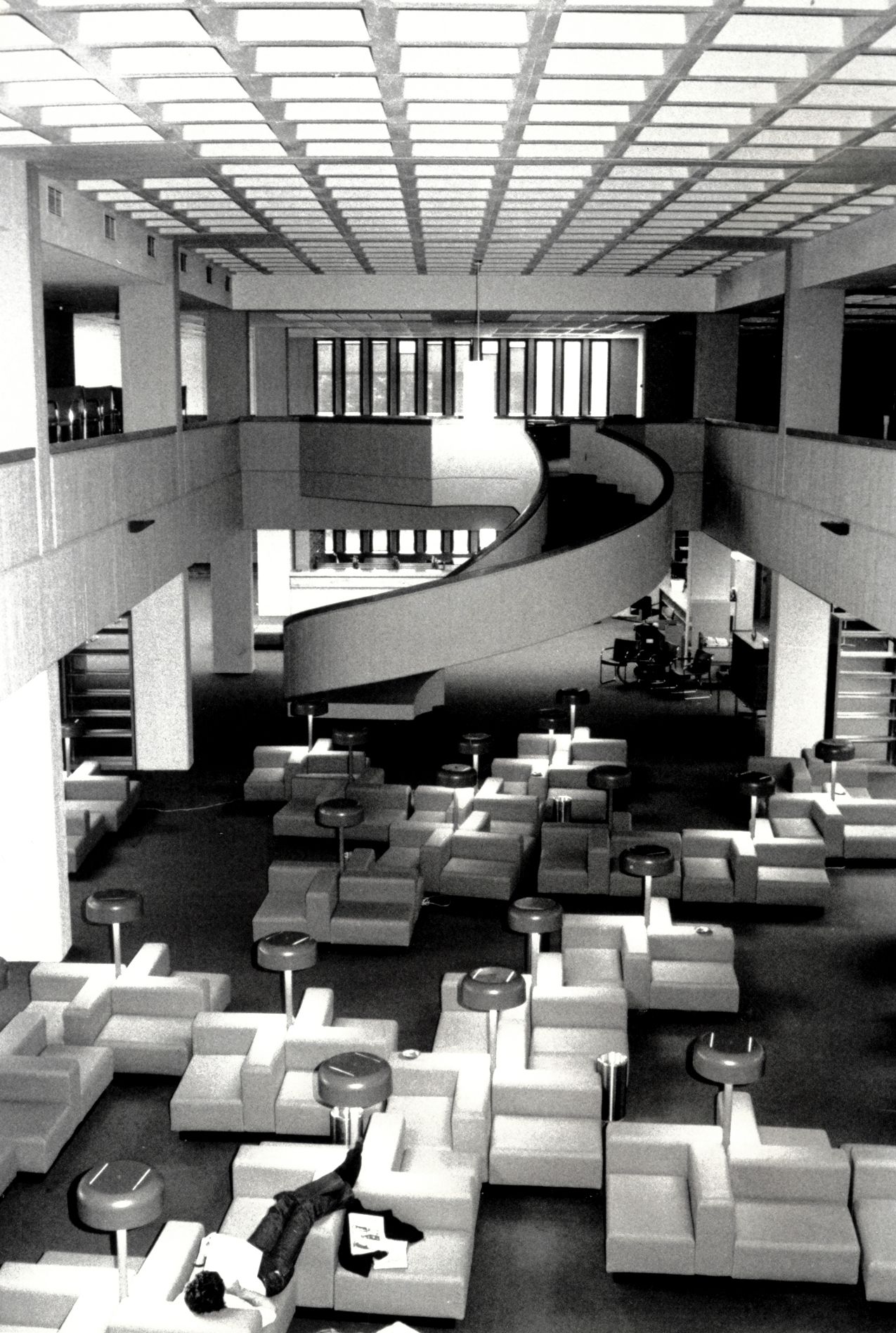 1976:  The 1976-1977  Undergradute Bulletin  states, " The Frank Melville, Jr. Memorial Library provides both an intellectual and physical focal point for the campus. The combined collections of the Melville Library, its five departmental branch libraries and the University's Health Science Library this year reached 1,000,000 volumes. In addition, library collections include 1,200,000 items in microformat and subscriptions to 9,187 periodicals."

1977: The “Bridge to Nowhere” is completed and dedicated. It measured 30 feet wide and 475 feet long, but rather than connecting to the Melville Library, it provided direct access to the Fine Arts building. 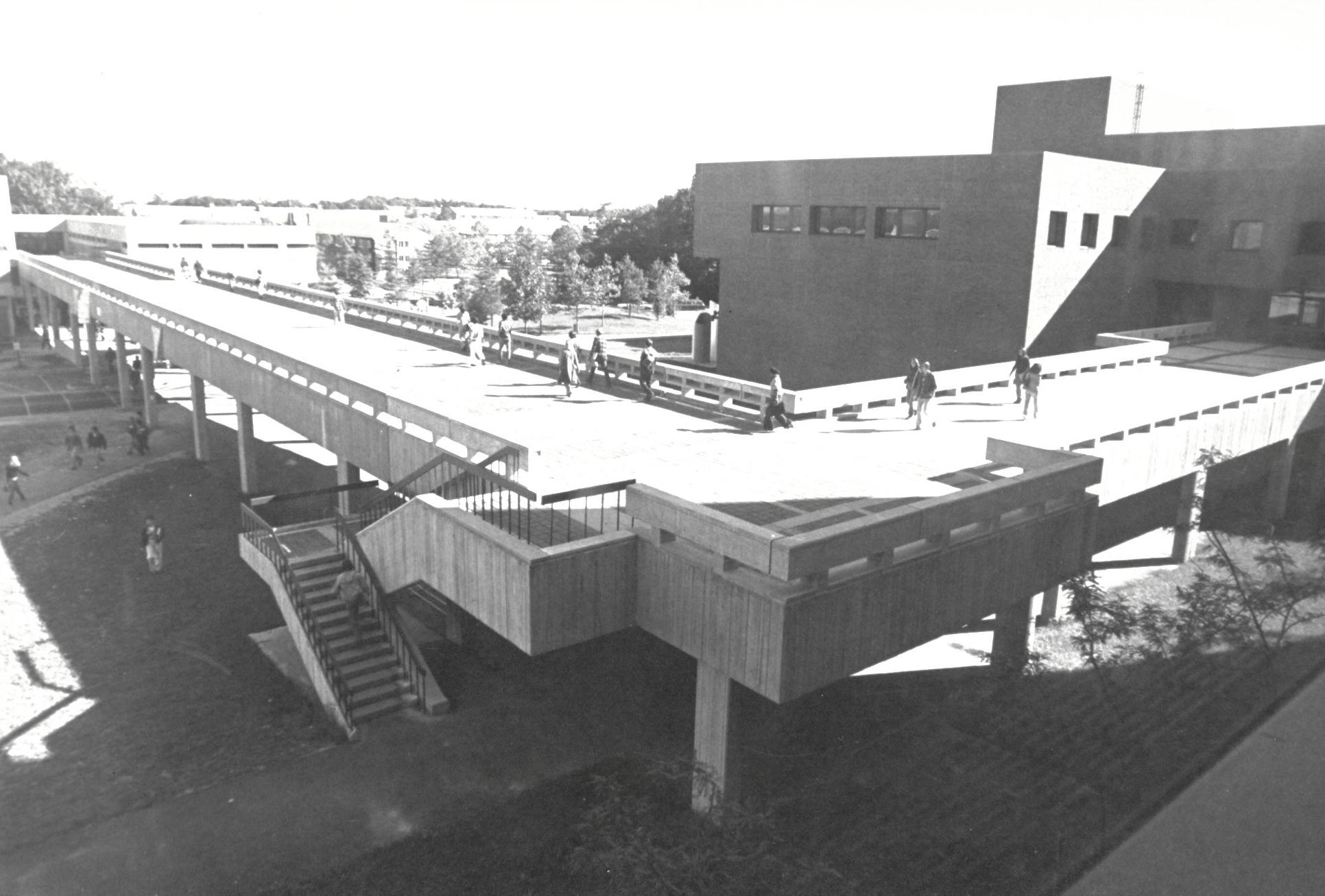 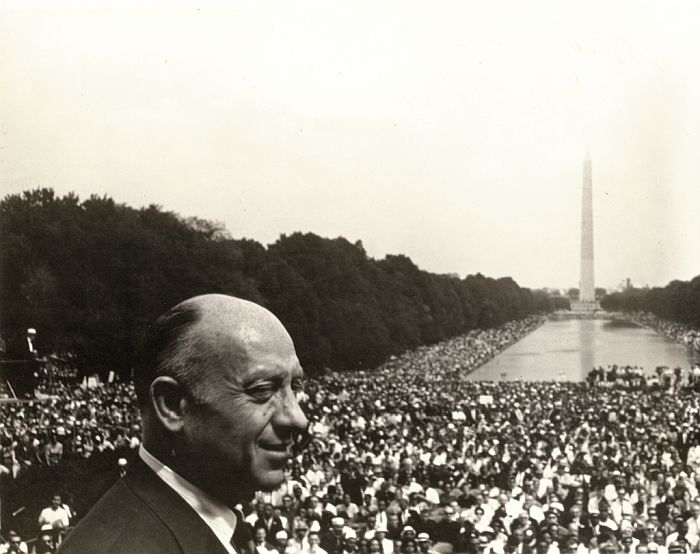 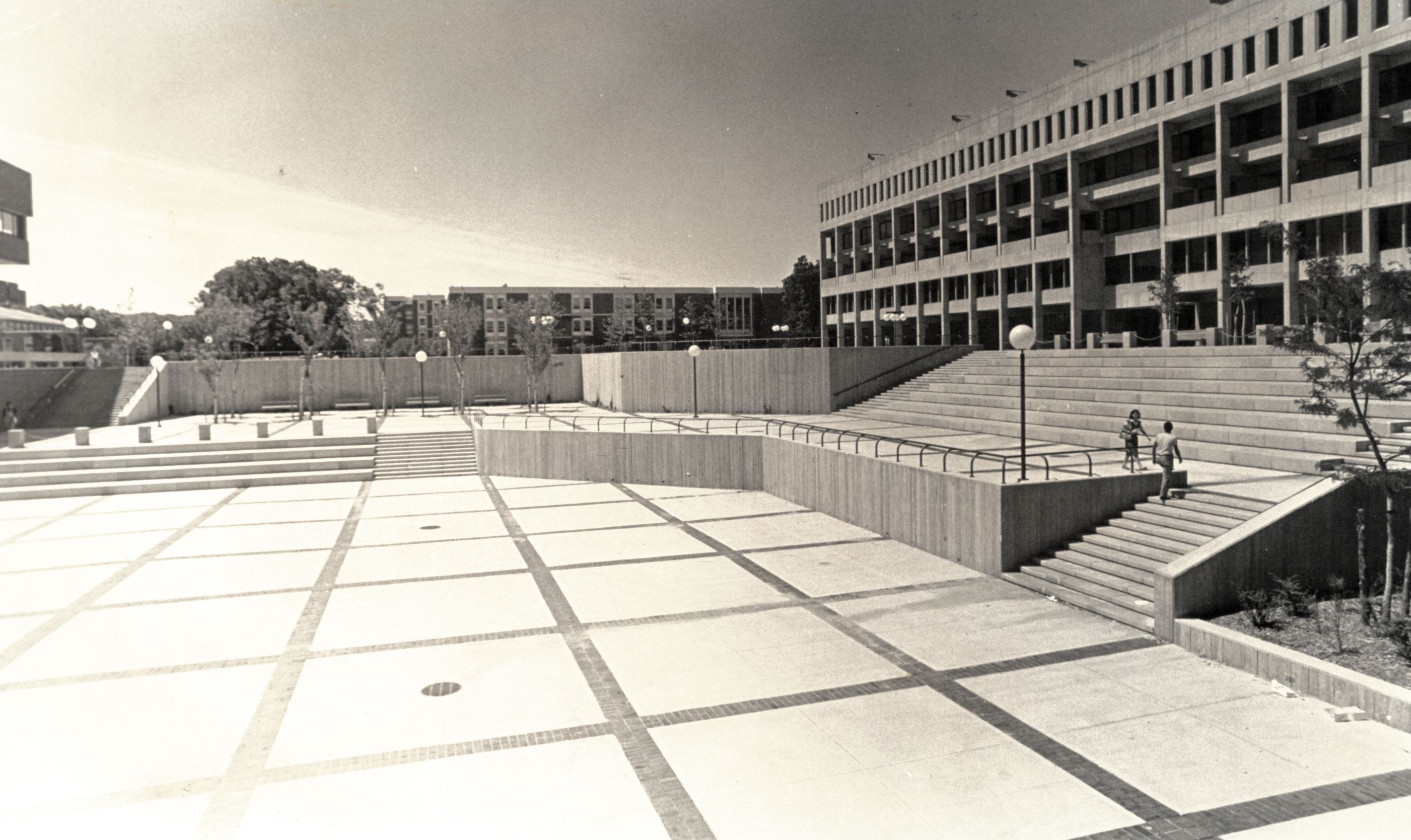 East side of the Melville Library, c1987. Yes, this is now the area of the grassy Staller Center steps and Fine Arts.
Source: University Archives, SBU Libraries.

1988: The library embarks on a major project to barcode its book collections. This work is done in preparation of launching the first database-driven catalog.

A contest was announced to name the online catalog. 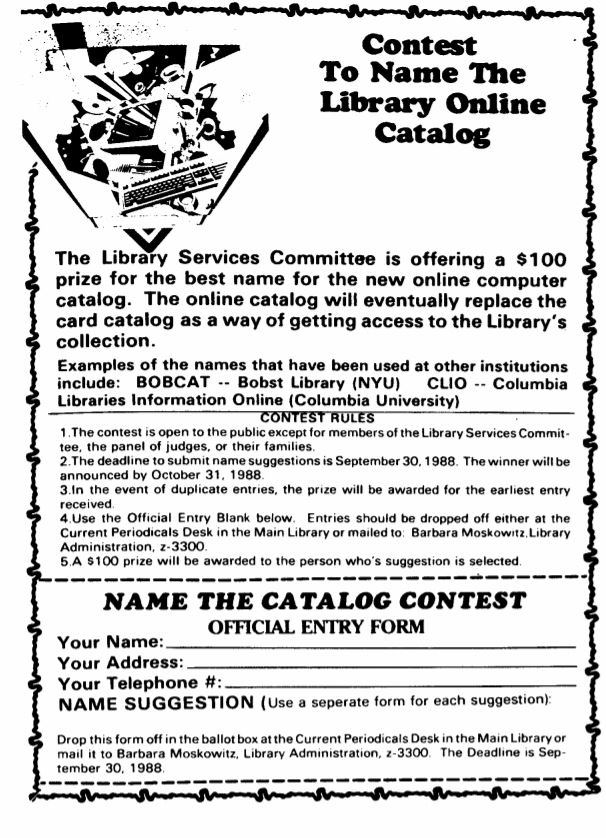 1989: The winning submission was STARS (STony Brook Automated Retrieval System) which remained the name of the catalog through September 2019.  The name was submitted by Denise Clavin, a computer operator with the Information Systems Department at the University Hospital. 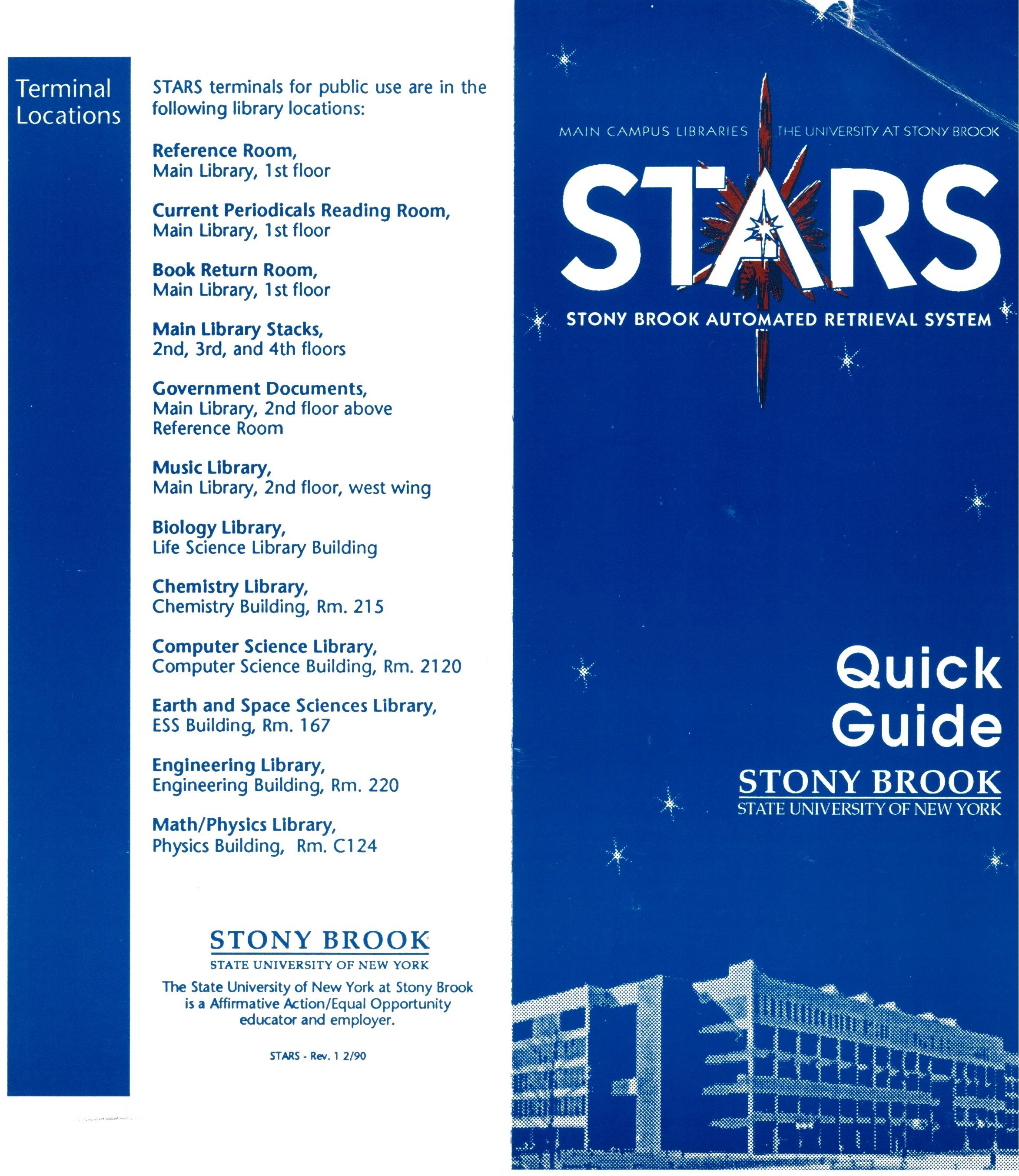 And the winner is...STARS! This brochure described how to use STARS and the location of terminals to access it.
Brochure, c1990.  Source: University Archives, SBU Libraries.

August 1996: Joseph K. Branin named Dean and Director of Libraries. Under his leadership, many branch library collections were consolidated and relocated to the Melville Library.

Spencer Marsh is named the Director of the Health Sciences Library, a position he held until 2008.

October 1997: The Barry S. Coller Learning Center was dedicated on October 30, 1997 at the Health Sciences Library. Named in honor of Dr. Coller, a former faculty member in the Department of Pharmacology, the lab featured new classrooms and computer workstations. 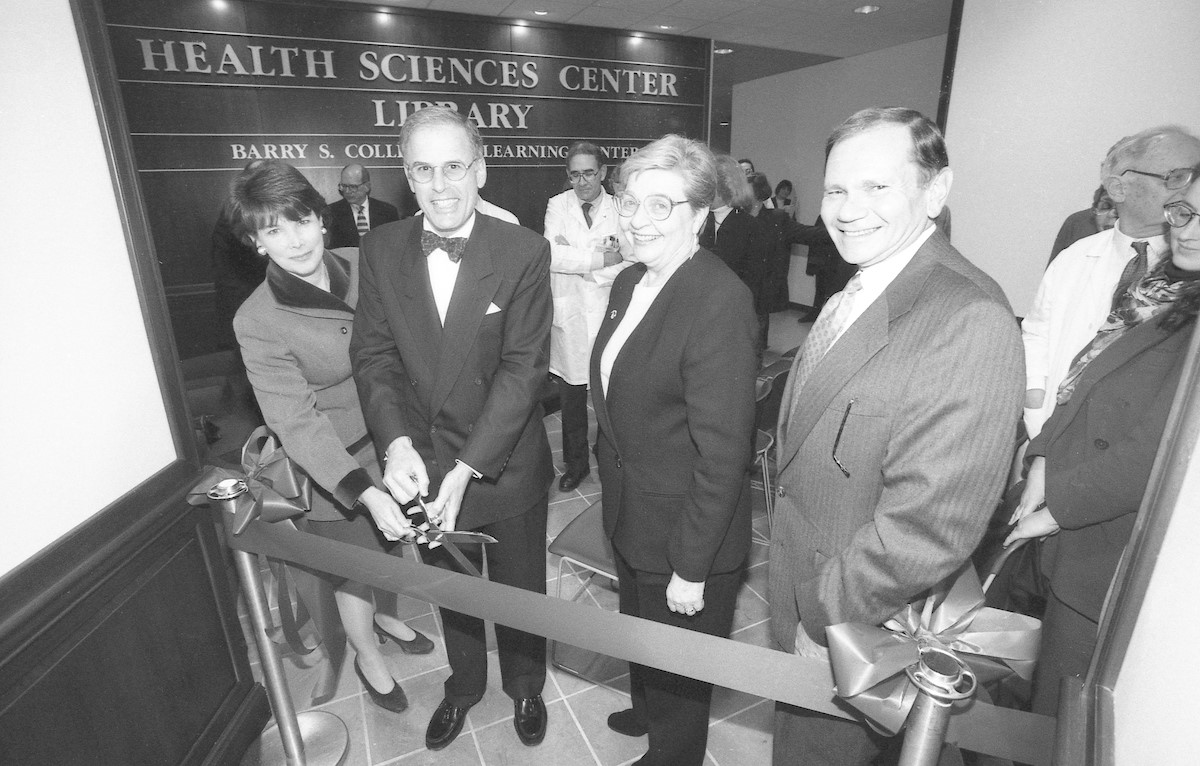 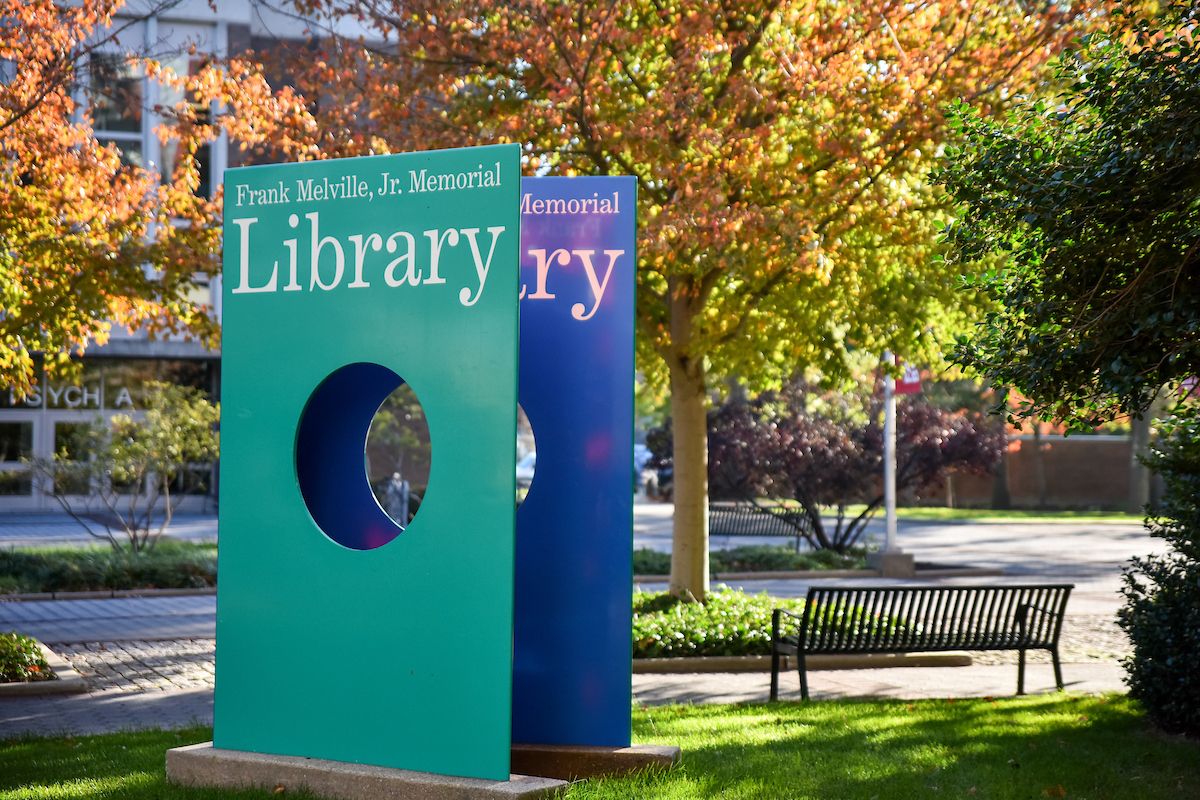 May 2002: The legendary “Bridge to Nowhere” is demolished.

October 2009: The Library at Stony Brook Southampton opens; it is the first LEED-Certified library on Long Island. 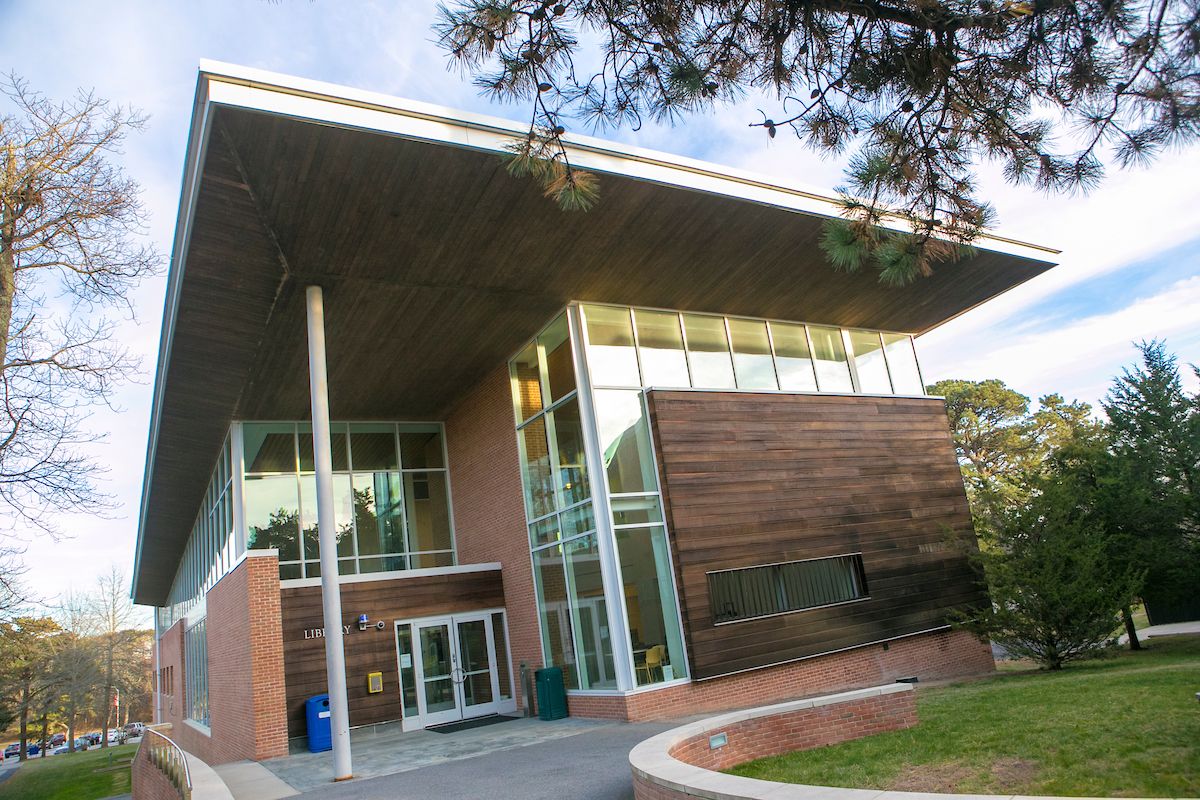 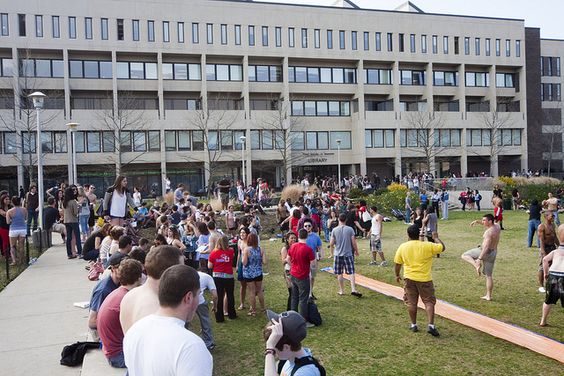 The Staller Steps outside the Melville Library is a favorite gathering spot on campus.
Photograph, c2013.  Source: Stony Brook University. 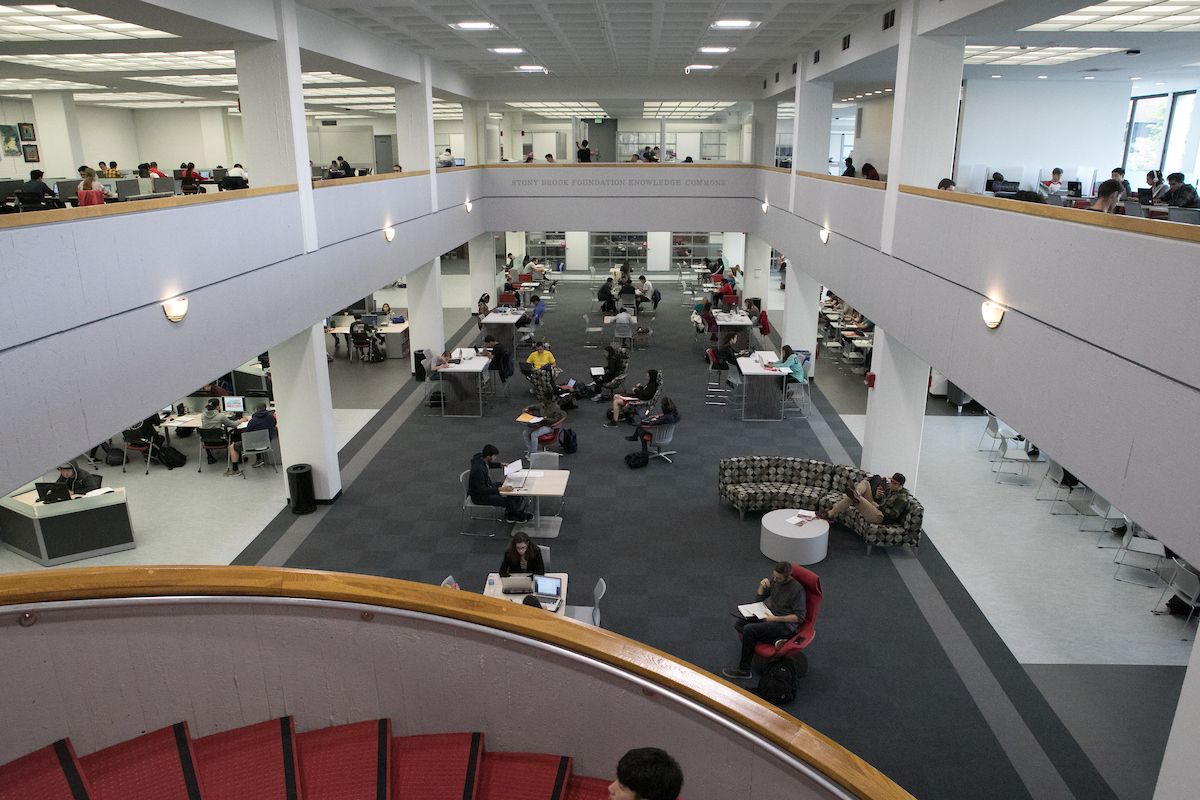 September 2019: The University Libraries debut its new discovery catalog named "SEARCH." This new system is part of a SUNY-wide initiative to provide researchers the ability to search collections across all SUNY campuses from a single portal. 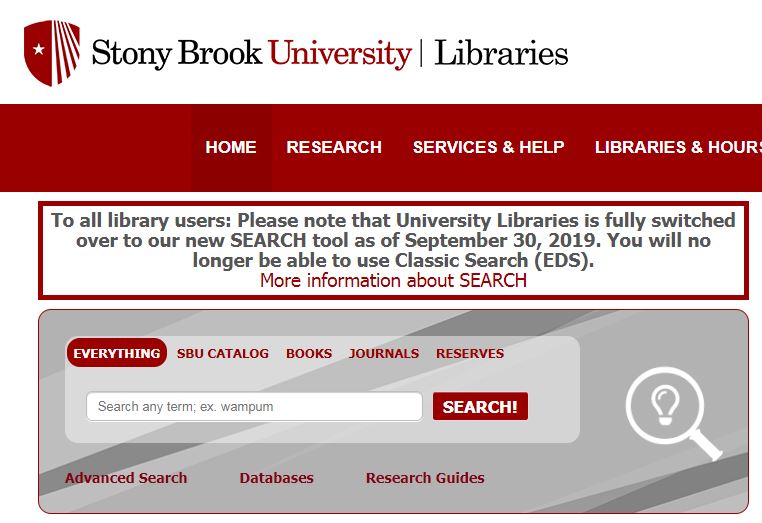 March 2020: The University Libraries respond to the COVID-19 pandemic and provide continuity of library operations to facilitate and support remote access to library collections, learning, and instruction. 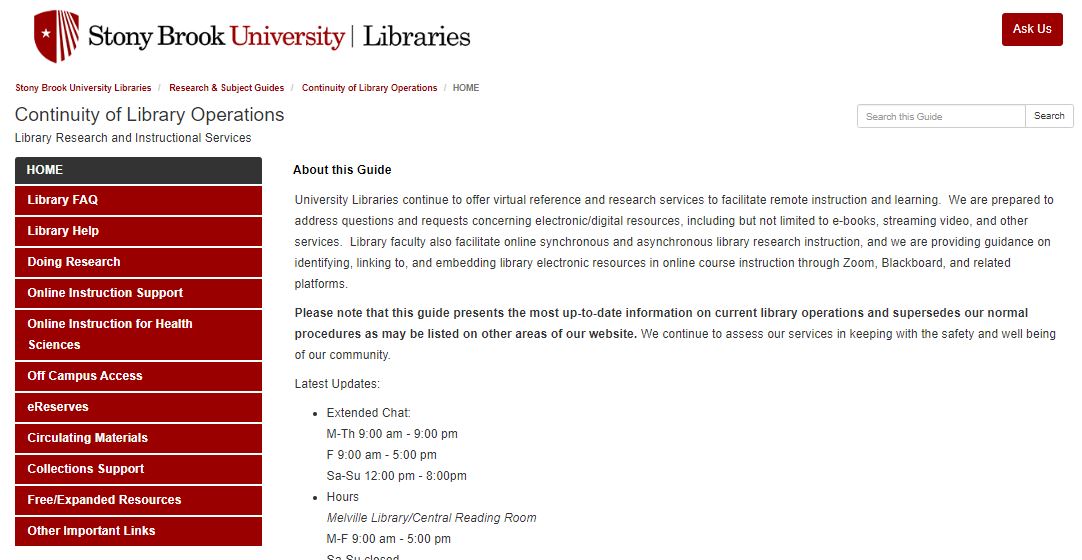 About the University Libraries

The Frank Melville Jr. Memorial Library is the main library building at Stony Brook University. Located on in the center of the academic mall on the west campus, it is named for the father of Stony Brook philanthropist Ward Melville.