The Chemistry Department will hold a memorial service on  Saturday, May 18 at 2 PM in Charles B. Wang Center Chapel, Stony Brook University in Prof. Kerber's honor. 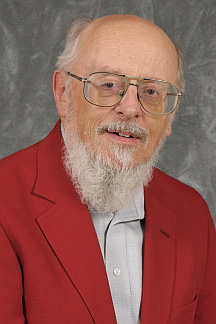 Bob was born and raised in Connecticut by his parents Cyril Kerber and Mildred Kerber Visconti. He earned a BS degree in Chemistry from the Massachusetts Institute of Technology in 1960 and a PhD in Organic Chemistry from Purdue University in 1965. Then as a freshly minted Ph.D. he came to Stony Brook where he established a research career in what was then the relatively young field of transition metal organometallic chemistry.

Beyond the research laboratory, Bob rapidly established himself as a most valued leader in Chemical Education and in Departmental and University Service. As he rose through the academic ranks, Bob taught literally thousands of organic and general chemistry students.  He was well known for his challenging and lively classes that often focused on real-world problems.  In multiple years, he was chosen by the graduating chemistry seniors as the “Outstanding Chemistry Professor.” In 1986 he was awarded the President’s and Chancellor’s Awards for Excellence in Teaching. In 2002 his extended contributions to teaching and education were recognized by the University as he was named Distinguished Teaching Professor.

For decades Bob was the front man for the Chemistry Undergraduate program, serving as Coordinator or Director of Undergraduate Studies for over 25 years. During most of that time, he also served as a general faculty advisor during summer new-student orientation programs.  In 1977 he chaired the University Task Force that established the first writing requirement for all undergraduate students. Ten years later, he was again called upon to chair the General Education Committee which created the Diversified Education Curriculum (the DEC).

Bob’s love of chemistry never diminished. In his later years he became somewhat of a chemistry iconoclast, writing a series of articles for the Journal of Chemical Education addressing common flaws and fallacies in chemistry education.

In 2011, the Chemistry Department celebrated Bob’s career with a symposium as he retired with rank of Distinguished Teaching Professor Emeritus.  But this did not end Bob’s University or Department service. He became an active member and eventually Chair of the Stony Brook University Emeritus Faculty Association.

With his faithful dog Penny in tow, Bob remained a frequent visitor to the Department and was an active participant in the Department’s alumni affairs. He was a key member of the team that put together the Leaders in Chemistry Wall ( https://www.stonybrook.edu/commcms/chemistry/about/Tiles.php), and of course, he is honored with his own tile on that wall.

Bob contributed greatly to the Department and the University, and he will be greatly missed.