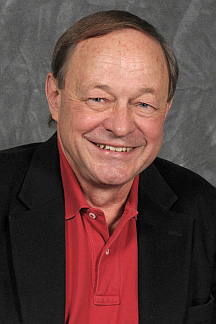 Ask yourself the question, "What happens to a molecule when it absorbs around 300 eV of energy and a carbon 1s electron is ionized?" The common answer is " It flies apart!" This intuition is consistent with early studies that led to the term "Coulomb explosion," but new experiments have shown that the relaxation processes following such excitation can be highly selective. My research group is investigating the reasons for this selectivity and is exploring potential applications to microfabrication technology. This technology is directed at producing mechanical and electronic devices on the incredibly small scale of nanometers.

The inner shell electrons in molecules are called core electrons, and many of these have binding energies of hundreds of electron volts and are localized to particular atoms in a molecule. This localization can lead to a very desirable result--atom selective photochemistry! Photons with these high energies lie in the soft X-ray region of the spectrum. Such photons can be used either to ionize the core electrons or excite them to different kinds of bound states. The absorption spectrum of a molecule in the soft X-ray region therefore consists of sharp structure due to the bound states, and broad features due to the ionization. The sharp structure and the details of the broad features are very sensitive probes of the bonding properties of molecules and are being used to learn about the nature of bonds in molecules chemisorbed on surfaces. Such knowledge is necessary, for example, to understand the catalytic activity of solids.

The dominant decay process following excitation of a core electron and creation of a core hole in the molecule is Auger decay. In this process, one valence electron falls into the core hole and another is emitted. We identify which valence electrons are involved by measuring the kinetic energies of the emitted electrons. The results depend upon the nature of the core hole excited state and serve to characterize these states and assign them to particular features in the absorption spectrum, which is the first step in understanding the chemistry.

Core electron excitation and subsequent Auger decay is a very large perturbation on the molecule that produces a multiple electron excited state, which seriously disturbs the bonding structure of the molecule. Bond rupture or fragmentation commonly results. We detect the ionic fragments in a time of flight mass spectrometer and relate their production to specific Auger decay processes by detecting the electrons and ions in coincidence and doing a covariance analysis. The chemistry, i.e., the transformation of the molecule, thereby can be understood in terms of the changes in the electronic structure. In addition, our studies have shown that the angular distribution of the fragment ions can reveal the symmetry character of the core hole excited state. Group theoretical symmetry labels are a most important means of identifying and characterizing the states of molecules.

Neutral fragments produced in excited states can be detected by their luminescence. Visible and ultraviolet luminescence also probes the rotational and vibrational level populations of the Auger final state, which reveal the molecular dynamics of core electron excitation and core hole decay on a time scale of femtoseconds.

Development of the experimental techniques associated with this project has been completed, and extensive studies of new X-ray induced, atom-selective chemistry are being conducted.

Emulating the research process in the classroom, Hanson DM ABSTRACTS OF PAPERS OF THE AMERICAN CHEMICAL SOCIETY 216: 013-PHYS Part 2 AUG 23 1998