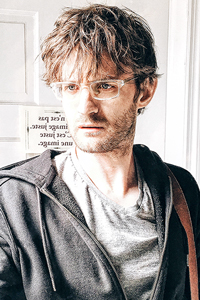 Andrew V. Uroskie specializes in modern and contemporary art and the moving image. Broadly informed by psychoanalysis, phenomenology and post-structuralist philosophy, his work focuses on how durational media have helped to reframe traditional models of aesthetic production, exhibition, spectatorship, and objecthood.

Uroskie is affiliated with Stony Brook’s Graduate Program in Philosophy and the Arts, and the gradute concentration in Media, Art, Culture and Technology. He regularly conducts graduate seminars on the history and theory of experimental film and video, site-specificity, installation and environment; minimalism across the arts, and interdisciplinary critical methodologies. He advises dissertations and master’s theses on a wide range of modern and contemporary topics, and from 2013-2017, served as the Director of Graduate Studies for the MA/PhD Program in Art History and Criticism. He currently serves on the editorial boards of Afterimage: the Journal of Media Arts and Cultural Criticism (UC Press), Postfactum: art, science, and technology (Lausanne), and HART: Revista de Historia, Teoría y Crítica de Arte (Bogota), and he featured in the documentary Ken Dewey: This is a Test (Sally Williams, 2016) on the late American performance artist.

Uroskie’s monographic study, Between the Black and the White Cube: Expanded Cinema in Postwar Art , was published in 2014 with the University of Chicago Press, and reviewed in the journals Leonardo , Visual Studies , Millenium Film Journal, Afterimage , Critique d’Art , ARLIS , Choice-Connect , and the College Art Association , and is widely cited within the literature as a crucial reference for the emergence of film and video within contemporary art. It is currently being published in a Korean translation with a new forward, and a Spanish translation is forthcoming.

Winner of 2018 Creative Capital / Andy Warhol Foundation Arts Writers book award, his forthcoming study, The Kinetic Imaginary: Robert Breer and the Animation of Postwar Art , attempts to revise our understanding of Kinetic Art through an investigation of the interdisciplinary practices of Robert Breer and his milieu. A second book in progress, Remaking Reality: Science/Fiction, Media/Art , explores contemporary intersections of art and technology in the age of ubiquitous computing.