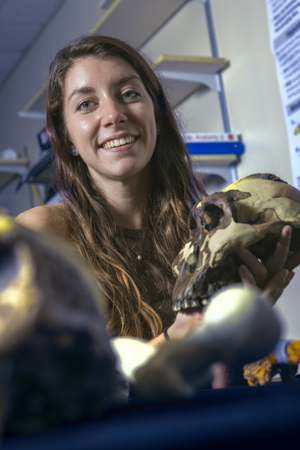 As a dual Anthropology & Human Evolutionary Biology major, Lydia Myers certainly knows that the Turkana Basin is where "everything is happening in the field!"

Lydia participated in the Turkana Basin Institute field school last spring. And this summer, she had the opportunity to return to Kenya to conduct field research on " Spatial distribution of artifacts within the early pastoral habitation site of Nakwaperit, West Turkana"   under the supervision of Prof. Elisabeth Hildebrand ( Department of Anthropology). Lydia had previously taken coursework with Prof. Hildebrand at both Stony Brook (including ANT 355: Ancient African Civilizations), and at the TBI field school, where she learned the basics of excavation. The summer project also required in-depth training to operate a Total Station, an instrument used by archaeologists to record spatial data on artifacts and layers at a site. Lydia had previous research experience in Anthropology at SB, having been involved since the beginning of sophomore year in the functional morphology laboratory of Dr. Gabrielle Russo.

Lydia’s field work & research project with Dr. Hildebrand this past summer was funded by the Angela & Dexter Bailey-URECA award, a decisive factor in enabling her to pursue this opportunity: “  Having that grant – that was what made the summer possible for me. I never would have been able to go otherwise.”    Lydia plans to stay involved in research projects with both of her mentors, and ultimately plans to pursue a PhD in physical anthropology or paleoanthropology.

At SB, Lydia is involved as a member of the University Scholars program; she served as a student assistant in the Undergraduate College ITS and LDS centers, and worked also with the Residential Safety Program. A graduate of Watkins Glen HS in Schuyler County New York, Lydia became fluent in Portuguese during her gap year in São Paulo, Brazil as a Rotary Youth Exchange student (August 2015-June 2016). Lydia's hobbies include dance, piano and cooking. Below are excerpts of her interview with Karen Kernan, URECA Director.

Karen. Tell me about the site where you were doing your field research.  What sorts of kinds of questions were you trying to answer through this project?
Lydia. The site is called Nakwaperit, which is on the west side of Lake Turkana. It’s a very interesting site because, unlike the monumental ‘pillar site’ cemeteries that are better-known in this area, we haven’t really found any habitation sites on the west side of the lake before. …. So from the outset, we thought it would be interesting to look at Nakwaperit to learn through spatial data how early pastoralists were living at the site (~4000 years ago) and to learn about the day-to-day lifestyle during this time period. It’s an intriguing site for understanding social aspects of these early pastoralists and the economic changes brought about as herding spread from the Sahara into Turkana.

My role in particular was operating a total station, an instrument used for collecting highly accurate spatial data of an area. To begin to understand site formation processes (to see where artifacts are coming up, how they are layered) and site deformation processes (how the site is eroding), we need to meticulously document the spatial distribution of artifacts.

How much work has already been done at this particular site?
The field school has been working at Nakwaperit since 2016. On one side of the ridge, a lot of artifacts (including pottery, both decorated and undecorated) had been found. This year, we targeted another part of the ridge a few hundred meters away where human remains were previously spotted on the surface and were in danger of being washed into the Turkwel river below. We invited a specialist in human remains recovery, bioarchaeologist and SB postdoc Elizabeth Sawchuk, to join our excavation in case any burials were encountered. As we were walking over to the other side of the ridge, we saw a cranium eroding out of the surface. And there was a large amount of bone on the surface eroding down the slope. It turned out there was actually a complete skeleton  in situ –undisturbed underneath the sediment. …But that moment was when we realized that the bone needed to be collected and the burial excavated before it eroded away. So that’s where we did most of our digging this year.

What’s the timeline or process for you when you’re doing the field work? Are you working most of the time to collect specimens/artifacts?  Do you have time to analyze the data?
So in the field, we had a couple of weeks where we were at the site actually doing the digging. I was taking the points with the total station. (We took points for everything! I have  so much data!)  But then after we were done with that, we came back to the lab at TBI and we looked at all of the skeletal material that we had collected – and all the pottery – and everything, and figured what it was, where it was on the surface…and looked to see if it could be associated with any of the material found  in situ. For instance, there was some material that I shot in with the total station that had eroded down the slope that could be put together with material that was found underneath the ground. …Now that I’m here back at SB, I’m going to take a GIS class that will help me analyze all the spatial data that I have. I will have a lot to present at URECA next spring!

You mentioned the total station instrument. Was that hard to learn how to operate?
The total station – I love it but it can be irksome to set up. It’s very particular! You have to do everything in a certain way. And every single time there is a problem, you learn more because you have to go into the system and fix it. You need to know all the little things that can go wrong. Through troubleshooting, I learned so much about that machine. So now, I’ve got a good hold on how to work with it.

What were some of the finds/discoveries from this summer?
The burials were very interesting. We found one that was mostly still under the surface, with only top of the skull exposed. There were two more that we could see that hadn’t been completely eroded yet.  … When we were looking through everything, we kept finding pieces of the frontal bone of the skull bearing a feature called the metopic suture. And lots of patellae (knee caps), and fragments from the left part of the lower jaw…. So even though we thought we found only 3 relatively complete individuals – it seemed like there could be a lot more in the scattered remains. ….And also, in the first individual that we excavated (the one that was completely in situ) – you could see that the finger bones were very osteoarthritic and fused together. We think that the individual was really old which is interesting because-- based on the condition of the teeth, and the hands and feet--it suggests that in the community, somebody would have had to take care of this person. They probably had to feed them, help them. That shows a lot about the social bonds of the community that we wouldn’t have known otherwise.

What did you most like about doing your research this summer?
Goodness! It’s just discovering new things about people in the past that is very interesting to me. It’s like putting together a puzzle. . . Looking at all the artifacts we are finding from 4,000 years ago, we know almost nothing about everyday life of pastoralists living in the area around Lake Turkana. So just learning new things about that, and just being where we’re finding bones, pottery, beads and other artifacts– right as it’s happening – is the coolest thing ever! It's one thing to read papers about finding sites, but to actually be there when it is happening--that is so cool!

What’s the most challenging aspect of the research you do?
Putting together the puzzle. I have all these little bits of information (e.g. how the long bones were oriented when they going down the slope…or this particular spot where a lot of the artifacts were clustered)…In my notebook, I have all of these bullet points of things that I noticed while in the field. And so now, I have to figure out how to get my head around that completely and come up with a big picture from it. That’s the hardest part.

That's the same answer you gave when I asked what you like best!
Yeah – putting together the puzzle, that’s the hardest but also the best part. Because I have all the little bits of information/data – they’re all floating around in my head. If I can come to the conclusion of what it all means together, it will be so satisfying to finally fit all the pieces of the puzzle together.

What are your plans now?
I’m contemplating, since I have two majors, that I might be able to do 2 senior honors theses. It would be really interesting to see if I could use this URECA project as a senior honors thesis topic. It’s such an awesome project….but I also really want to do a senior honors thesis in functional morphology which is another lab I’m a part of in anthropology department, working with Prof. Russo.  I love working on both topics, so it would be hard to choose between them.
For next summer, I’ve been looking into a field school in Ethiopia. And long term, I would like to do a PhD in physical anthropology or paleoanthropology.

Had you had generally positive experiences with mentors/professors?
I’ve had some amazing teachers and mentors! Prof. Hildebrand is awesome. She is super inspirational …And Prof. Gabrielle Russo is brilliant. Prof. Kimbel, one of the professors from the TBI field school was an amazing teacher as well, and Dr. Jason Lewis, the director of the summer TBI program was also a huge inspiration to me. I’ve learned so much from all of them!

Will you get back to Turkana Basin?
If I plan on continuing in this field -- which I do -- the Turkana Basin is where everything is happening in the field. So I’m definitely going to have to go there again...thank goodness!