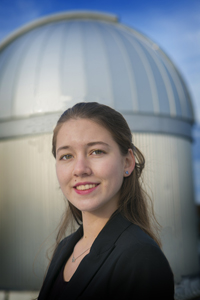 Abigail Bishop is a junior in the Women in Science & Engineering (WISE) program (class of 2019), majoring in Physics and Astronomy. Since September of 2016, Abby has been doing research under the mentorship of Prof. Michael Zingale  — working on Type Ia supernovae simulations to investigate a form of stellar death used to measure distance astronomically. In her sophomore year, Abby participated in research under the supervision of Drs. Krishna Kumar and Seamus Riordan and co-presented a poster at the annual URECA poster Celebration of Undergraduate Research event titled: " A test setup using Gas Electron Multiplier/GEM detectors for the sPHENIX Time Projection Chamber/TPC. ”

At Stony Brook, Abby is involved in the Astronomy Club, the Society of Physics Students, and is a member of the Color Guard for the Spirit of Stony Brook Marching Band. Abby is a peer mentor for WISE, and has previously served as a freshman liaison and secretary for the program. Recently, Abby founded and now serves as the president of the Special Olympics club at SB. Since she began at Stony Brook, Abby has been employed as a lead student technician for Client Support and has appreciated how working in technology support " helped me develop my problem solving skills, taught me how to explain difficult concepts comprehensively, and improved my ability to work with others to solve problems. ”  Last summer, she worked as an astronomy summer outreach intern for the Appalachian Mountain Club at Carthage College (summer 2017). Abby’s long-term goal is to pursue a PhD in physics or astronomy.

Abigail Bishop graduated from Saratoga Springs HS in 2015. Her hobbies (outside of astronomy) include hiking, musical theatre, and art. Below are excerpts from her interview with Karen Kernan, URECA Director.

Karen. Tell me about your current research.
Abby. There are a lot of different ways that stars can die. And there a lot of star systems in the night sky where two stars actually orbit each other. The system that we’re looking at involves a star that’s already died and become a white dwarf and a star that’s in the process of dying. And in that process of dying, it launches material onto the white dwarf and the white dwarf explodes – and that’s called a Type 1A supernova. What I am working on, with Prof. Zingale, is simulating how the white dwarf starts to explode.
Our simulation is done using a Fortran code that has been created; then the data analysis of the simulation is done using Python.

What’s the next phase?
My research group has been running these white dwarf simulations using only 3 elements. So what I’m going to start working on next semester is to run the simulations with 13 or more elements. That way, we will get a clearer picture of how elements fuse inside of these stars, and a more accurate estimation of how much temperature is gained. How much energy is gained and lost in the star…

You also previously had been involved in another research project at SB, right?
Yes, that one was also super fun. We were looking into how the actual nucleus of a lead atom works- how it’s structured. That project involved collaborating with other groups in the physics department to set up some detectors called gas electron multipliers.
Learning about how these gas electron multipliers work fit in really well with what I had been learning in electricity and magnetism and other classes. So it helped reinforce what I learn in class. …In general, I would say that I really enjoy how learning information in different classes has tied in to the research that I’ve been doing. And it also helps me learn how to use what I learn in class in a more realistic sort of situation as opposed to all the practice problems.

How difficult was it for you coming in to find a research placement/opportunity?
It wasn’t as hard as I had expected it to be. When I first came to this school, I started getting involved with the Society of Physics students in my very first semester. And I got some advice about some professors I should speak to …And then, as it happened, when I took Prof. Kumar’s class, I was still looking for research. So I decided that I would ask him. And he said, “Talk to me in a month.” I asked him a month later; and he said, “Talk to me in 2 weeks.” I did; and he said, “Oh, talk to me in 3 days.” And then we set up an appointment, and finally at the end of the semester… I was able to start research! The biggest hurdle was just waiting and following up. I then spent 10 weeks in the summer, working with Prof. Kumar – and continued on in the following year.

What advice would you give to students who are thinking about research?
I would say that the process of contacting faculty seems intimidating but you should definitely try for it. When you’re looking for research, look at all of the different research projects in your department and see which ones are the most interesting to you and go and talk to those professors. Even if they’re not accepting undergraduate students at the time, just talk to them and start a conversation with them. That way, in a year or two after you’ve taken more classes, they’ll remember you. And so when you do want to get involved, they can see that you’ve been interested for a while.

How valuable is it to have a summer experience?
When I was working over the summer, I hadn’t quite developed my learning techniques for learning in research labs. But I found that you get to learn a lot of material and get to practice more when you’re working over the summer – as opposed to during the semester, when you’re doing 4 hours a week or so, and the work is spread out and you have a lot of material to absorb in a shorter amount of time. In the summer, because you are doing research every day, it is easier to learn and develop your skills when you’re doing research in the summer as opposed to the more spread out track you have during the semester.

Did you come in to research with a lot of previous background/preparation?
When I started work with Prof. Kumar, I had to learn so much from scratch. I hadn’t had a formal coding class when I had first started. And so I was learning C++ and Root all from scratch, and how to use COMSOL and all these other softwares. By the time I had started working with Prof. Zingale, I had taken coding classes, including one of Prof. Zingale’s Python classes. So I was able to more seamlessly move into his research and get involved.

Are there any particularly memorable days of research?
There was one day that I was using this software and I accidentally deleted the code that I had spent the whole semester creating! I thought: wow, this is terrible. But since I had deleted it and had worked all semester to create it, now I had the opportunity to recreate and confirm everything that I had learned that semester. So I was able to rewrite the code that I had deleted in about one or two sessions of when I was sitting down and coding it up.

Sounds stressful though….
It was – but what was satisfying was that the new code I was running was looking better than the old code that I had deleted and we were seeing actual results. We were seeing how the changes in these graphs were affecting the other graphs…We kept describing them as ‘hiccups.’  That was so much fun- trying to figure out what they all meant. I’m glad I got to learn from the experience, that I had the opportunity to really confirm what I had learned that semester. That was very cool.