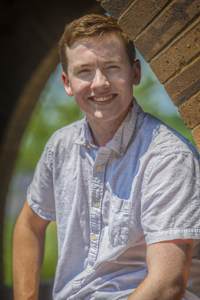 URECA Summer researcher Gregory Matousek relishes the opportunity to participate in full-time immersive research: "This whole environment which is engaging everyone in my group, enveloping everyone into this one big learning tank to discover more about particle physics has been one of the most thought–provoking experiences I’ve ever had in my education."

What keeps Greg’s attention and focus engaged is “Deeply Virtual Meson Production at a future Electron Ion Collider ”  –  a simulation study that explores the feasibility of measuring a heavy quark composite particle called the J/Psi which is made of Charm and Anti-Charm quarks. A Physics major in the Honors College, Greg works under the direction of Dr. Abhay Deshpande and Dr. Nils Feege. He initially joined the Deshpande particle physics research group in spring 2017, and has already gained experience on building /testing hardware for G.E.M. Detectors and for Magnetic Cloaking; he also worked on software simulation projects for detector analysis and particle collision simulations on Cherenkov detectors, and is currently focused on the EIC experiment simulations. Greg previously presented posters at the 2017 and 2018 annual URECA research Celebrations including: “ Particle Detection with the RICH Detector” and “ A Test Setup Using GEM detectors for the sPHENIX TPC.” Greg eventually plans to pursue a Ph.D. in physics.

At SB, Greg is involved as a Peer Tutor for various introductory physics courses at the Academic Success Tutoring Center and Residential Tutoring Centers. His hobbies include Rubik’s Cube Speed Solving, Chess, Basketball, and coding. A resident of Levittown NY, Greg previously graduated as the 2016 valedictorian from General Douglas MacAarthur HS. Below are excerpts from his interview with Karen Kernan, URECA Director.

Karen. Tell me about  your research project.
Gregory. So we’re researching the particle identification capabilities of the proposed Electron Ion Collider Experiment. Specifically what I’m focusing on is the study and detection of the vector meson J/psi which consists of Charm and Anti-Charm quarks. In the Deeply Virtual Meson Production process, you have your electron and proton scattering off one another and a meson is produced which has 2 quarks. In a detector experiment, the J/Psi has a whole array of decay products. In fact, we don’t technically measure or find a J/Psi in a collision, we are only able to identify its creation by analyzing its decay. One of its decays, an electron positron pair, can be detected easily in the detectors we’re simulating. Other decay products that are produced may not be able to be so easily detected (such as through muons which are much harder to detect) … so in this specific study we’re producing a J/Psi and we can actually detect the J/Psi ‘s decay. Knowing that a J/psi was created helps us learn more about the partons inside of the proton.

What have you learned from doing research that you wouldn’t have learned from your classes alone?
I learned about protons and electrons-- as many of us do starting in high school Physics…But going even deeper to seeing how those flesh out and how those interact with another on a really fundamental level, what’s inside a proton, how do those things inside of a proton interact with one another—it’s actually really cool! You essentially learn about the macroscopic physics world in your early physics classes; but by being involved in this research, coupled with new classes I’ll be taking, you learn more about more fundamental, more microscopic particles such as quarks and gluons.
Also, by learning about modelling and also learning how a research team actually operates, and how they actually discover new information, you learn so much more than you can from a class. Just the organizational skills I’m learning with my research group have improved my whole academic experience. I’m now a lot more organized now after working with the group; and I understand scientific papers a lot quicker now because I’m understanding the vocabulary, the nuances.

Do you enjoy the overall research group atmosphere?
It’s a very nice environment. I really like working with my research group! We’re researching and learning together as a group  rather than being focused on any one individual project. We like to keep bouncing ideas off of one another and work toward one goal, together. My mentors, Dr. Deshpande and Dr. Feege also help a lot in expanding our knowledge … They’re great at describing things in a way that I can understand or in a way that engages us, and they always make sure we’re working together as a team. We all meet in the Physics building every day at 10 am and we have a brief meeting to talk about what we’re doing for the week, what are the issues going forward, what we did the previous day….it’s extremely helpful.

What is it that you enjoy most about the research?
I think it's that there’s always something to learn every single day. Sometimes it can be overwhelming to think, I know so little…there's so much I don't know. But at the same time, I want to search out and learn more. This whole environment which is engaging everyone in my group, enveloping everyone into this one big learning tank to discover more about particle physics has been one of the most thought–provoking experiences I’ve ever had in my education.

Have you always had a passion Physics?
You know, I almost dropped out of physics in 11 th grade because it was very hard…but at some point something clicked in my mind and I started enjoying that feeling of understanding what was so hard in the very beginning…but yes, I’ve had a long-time interest and passion for Physics. Watching a documentary on the Antarctic Ice-Cube experiment on a sick day from school when I was in 8th grade is still a strong, vivid memory….

When I decided to major in physics for college, I chose SB for how amazing it was for research. And I was thankful to find Prof. Deshpande early on. I had decided to shoot him an email because I was intrigued by his research. And then he invited me to join his research team... I’m very thankful for that!

What’s the hardest thing about the type of research you are doing?
Since it’s primarily coding – it takes a long time to get the code developed. There are bugs involved… I did a few computer science classes in high school. But for most of what I need to know to apply it to particle physics research & simulations is something that I’ve mostly had to learn on my own.

Have you had the experience of presenting your work?
I presented at URECA twice so far. I tutor a lot on campus and so I’ve come to realize that I really enjoy explaining new things to people. I like to get people to understand something that they might not get initially. . It’s something I look up to in my teachers and mentors also – how great they are at explaining things.

What are your future plans?
I want to pursue a career in particle physics research. …I’m enjoying research a lot and doing the research has inspired me to pursue a career at EIC, or working at CERN or at some other project.  I remember that in 9th grade, I told my parents I want to work at CERN one day.

I do want to add that I’m very thankful for my parents and how they ‘ve promoted this kind of effort in me in wanting to go forward and follow through with one of my life dreams. They’ve always encouraged me to do what I’m interested in…Even though they are both in the police department, they still have always encouraged my pursuit of science…I’ve also been lucky to have teachers in high school, particularly my high school physics teacher, that really encouraged me.

For the research you do – what qualities are important to be successful?
I think as a learner you need to become used to fighting the discouragement of not knowing as much as other people. When I first joined my research group, I felt like I knew absolutely nothing as to what was being presented, what people were explaining.That can be discouraging, even overwhelming, when you are starting out.  ….but at the same time, you can use that feeling to drive you to better yourself and to better the group as a whole.  Even though you are aware of how much you don't know, you’re still able to look forward and learn and progress yourself.

Any other advice?
If you are trying to get a research opportunity, you have to go get it…things won’t come to your doorstep. Really searching out opportunities and showing your mentors how much you want to learn is a vital part of becoming involved with research in the first place.

Has it been helpful for you to participate in the research program this summer?
I’m very thankful to URECA because doing summer research would be difficult without the funding... When I found out I was getting a URECA offer, I felt like, "now is game time. Time to buckle down." And I’ve been doing just that. Making a lot of progress… Having the URECA stipend, and being able to pay for housing, I’m able to work and be at the physics building full time.

I did do physics research for credit previously. …but I wasn’t able to work as intensely as I am now. I’m now working 40+ hours a week, writing up code, studying simulations... studying on my own time too. And being able to dedicate this much time into research is not only opening myself as a person, allowing me to engage my whole lifestyle around researching..but also, now that I don’t have the stress of school, it really letting me understand that I really want to do this. It’s been life-changing. I’m never that person looking at the clock, or just trying to get through the day…I’m there until they force me to leave or my stomach wants me to eat!