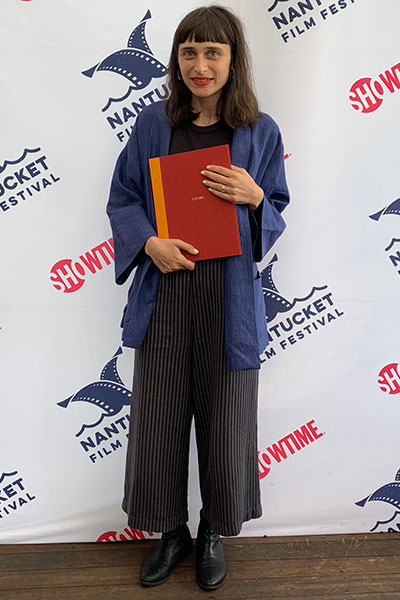 June 21, 2019—Stony Brook’s MFA in Film and TV Writing student Kate Levitt won first prize at The Nantucket Film Festival for her one-hour pilot script, Living.  As winner of the top prize in the Showtime one-hour pilot competition, Levitt gets a development meeting with a Showtime executive and $1,000.

This win follows another first-place finish at the North Fork TV Festival and a finalist slot at the Atlanta Film Festival.

Set in NYC in 1995, Living tells the story of an orthodox Jewish teenager who struggles with the conformity of his community while secretly becoming an acid dealer.  The rest of his family grapples with identity issues of their own.

"One of my main goals as a writer is to explore the adolescent narrative from unique angles," Levitt says. "I hope to tell coming of age stories that haven't yet been told, either because the characters are under represented or because they think, act, and feel differently than everyone else. And I want to tell these stories with honesty, but also with humor and care.

Levitt wrote the award-winning pilot in one of the small intensive workshops offered at Stony Brook’s Manhattan Center for Creative Writing and Film.

According to Levitt, “the in-class critiques—from the rest of my awesome cohort and from my professor, Alan Kingsberg, helped me focus on the story, and hone the narrative. The last two years at Stony Brook have helped me sharpen my voice and develop as a writer in ways I never thought I would.”

The pilot was developed as part of the TV Writing curriculum at Stony Brook Manhattan's MFA in Film. The 45-48 credit MFA, located in the heart of Manhattan, prepares students to build the kind of TV writing portfolio that can launch their careers in a field that is not only in a golden age of creativity but also of opportunity.

Kate's projects have also been profiled in Vogue Italia, The Village Voice,  Pitfork.com and the Baltimore City Paper.  She currently curates small art shows, and publishes a bi-monthly comic for Merry Jane that she writes and artist Brian Blomerth illustrates."

Kate also currently serves as a development intern with Killer Films in their TV Division.