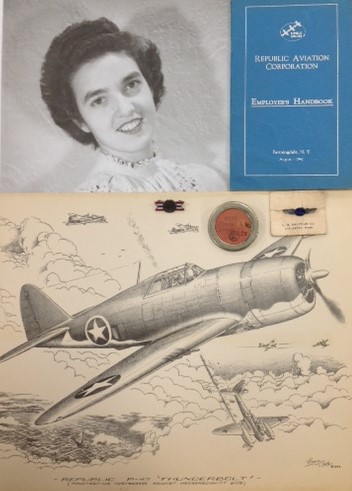 Extent, Scope, and Content Note
The collection is comprised of 4 linear inches of of World War II era documents and artifacts regarding the production of the Republic P-47 Thunderbolt airplane from Edith Gentile (born Ida Gentile), one of the first female stainless steel welders to work for Republic Aviation Corporation, in Farmingdale, New York. It also includes sheet music for "God Bless America," signed by Irving Berlin. The date coverage is 1938 to 2015.

Arrangement and Processing Note
Processing was completed in July 2015. A second accrual was processed in January 2017.
Finding aid updated and revised by Kristen J. Nyitray in June 2019.

The collection is arranged by item type and format. Documents and artifacts were re-housed in acid-free folders and envelopes, and placed in an archival document case.

Restrictions on Access
The collection is open to researchers without restriction.

Rights and Permissions
Stony Brook University Libraries' consent to access as the physical owner of the collection does not address copyright issues that may affect publication rights. It is the sole responsibility of the user of Special Collections and University Archives materials to investigate the copyright status of any given work and to seek and obtain permission where needed prior to publication.

“Ida Carmela Gentile was born at her parents’ home in Cedarhurst, New York on August 27, 1924, and passed away at her home in Greenlawn, New York on March 10, 2011. She was the seventh child of Rosalbino Gentile, Sr. (known to everyone as Ben), and Virginia Serafina Cesidia Pizzigati Gentile. There were 11 children born to my grandparents, and my father, Rosalbino Gentile, Jr. (who was known legally as Benjamin R. Gentile, Jr.) was their fifth child.

It was the custom when my aunt and father began school, that all immigrant, first names were Anglicized, and thus Ida became Edith. My aunt only learned she was legally known as Ida when she began working at 18 and applied for her social security number. She was always legally Ida, but she was known to everyone as Edith.

Aunt Edith had a normal, happy childhood, and graduated from Lawrence High School with business studies, and also took welding courses for the war effort (World War II). She was immediately hired by Republic Aviation Corporation in Farmingdale, and was one of the first woman stainless steel welders working at Republic Aviation, something she was always proud of – being a respected welder and helping the war effort. She was awarded the Army-Navy Production emblem, “a much sought after award for excellence in stainless steel welding.”

She also played the French horn in the school band at Lawrence High School, and met Irving Berlin when he came to the school on May 24, 1941 promoting his latest work, God Bless America (copyrighted in 1939).

Aunt Edith spent her working career as a bookkeeper and office manager. She was also a skilled golfer, avid reader, superb knitter, often creating beautiful sweaters for her nieces and nephews, and was always proud of her yearly vegetable garden.

I grew to know my aunt much more during the last years of her life when her three maiden sisters, which whom she lived, passed away, and she was alone in a large home. When she developed thyroid cancer, we spent many trips back and forth to Stony Brook University Hospital to see Dr. Masie Shindo and Dr. Joshua Rosenthal (otolaryngology), and Dr. Tamara Weiss (radiology). My aunt received magnificent, loving care at Stony Brook University Hospital.

The last 16 months my aunt had an aide who lived with her and took care of her every need. She died peacefully at home in her sleep.”