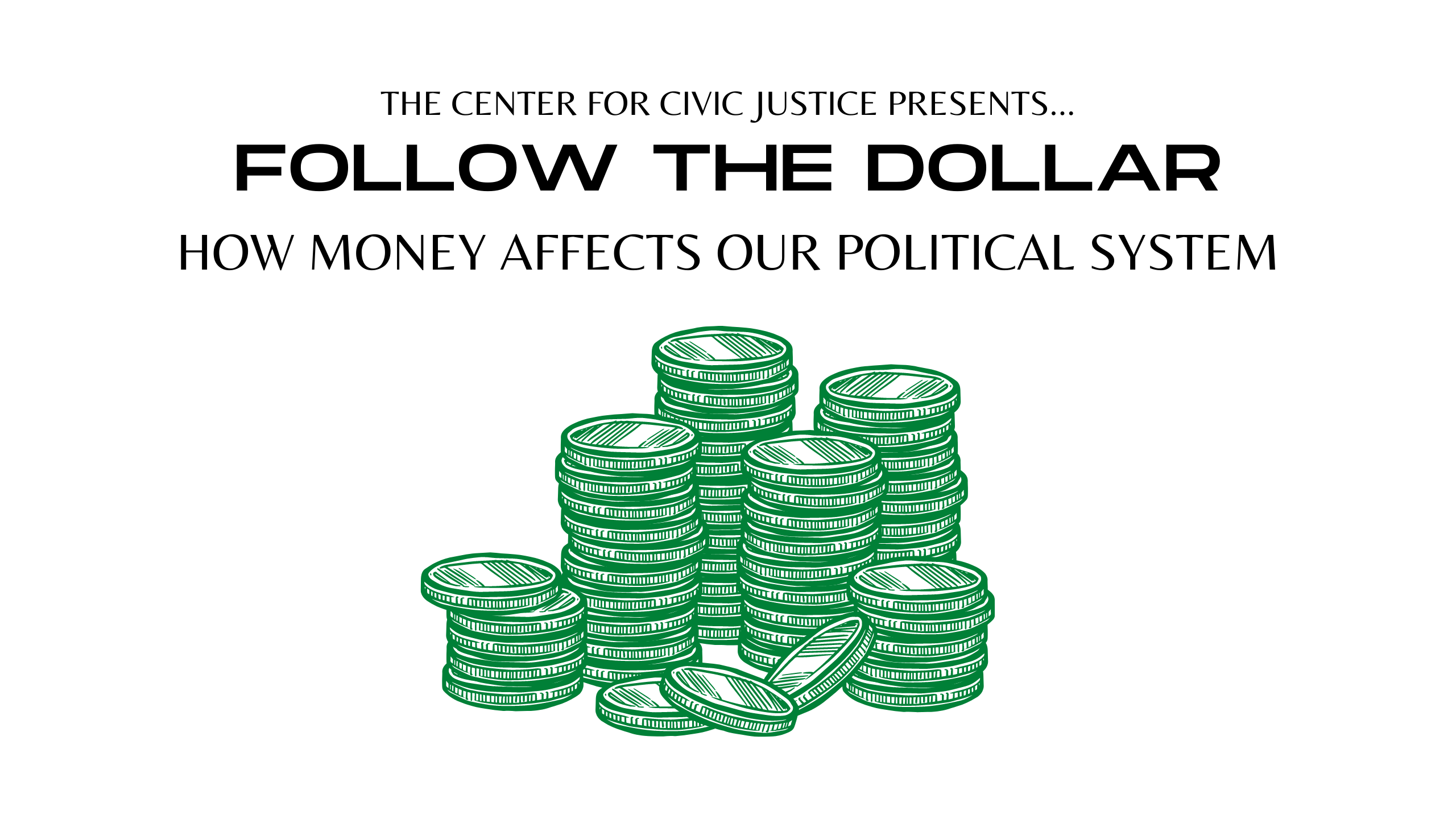 With the start of every election cycle, money is offered by corporations, banks, millionaires, and special interest groups to political elites along with electoral candidates in order to increase competition and endorse political platforms. Election races can often morph into costly campaigns that require candidates to constantly generate funding in order to retain both relevancy and influence. An issue emerges when considering the groups behind the big money in elections who oftentimes endorse candidates to further their own agendas. This can include backing certain political candidates who will potentially create legislation in favor of wealthy special interest money as opposed to the general public.

Money dominates the current political climate and it is essential that attention is drawn to this fact, especially in campus communities.  Follow the dollar through this resource guide as we take a comprehensive look on how our democratic system operates through the lens of big private money.

Wealth is power. It is essential to recognize billionaires, corporations, political nonprofits, and more have the capacity to greatly impact every facet of the election process down to the candidates that remain by the end of an election race. They can easily utilize funding as a means to convert their own needs into political influence, which has substantial impacts on everyday American citizens who should be the sole directors of election outcomes.

The topic of billionaire philanthropy is well-rooted in the systemic oppression of the working class and how wealth in the USA truly puts one above the law. As defined by Merriam-Webster’s dictionary, philanthropy is “ an act or gift done or made for humanitarian purposes .” The concept of “weaponizing philanthropy” seems oxymoronic in that such a generous deed shouldn’t possibly be adjacent to a term that is so negatively associated. However, the billionaire class executes this fallacy with such perfection that something as inherently good as philanthropy has become an entity intertwined with much corruption.

Billionaires are worth more than the gross domestic product (GDP) of most majority nations. In addition, the wealth system in the USA which not only perpetuates the wealth gap, but systematically promotes a societal complex in which poverty and excessive wealth coexists should be subject to substantial reform. The Guardian reports that American billionaires comprise 40 percent of all the wealth but only contribute to a fraction of all taxes paid. The conversation to revolutionize such a dynamic begins with how billionaires attain such an expansive magnitude of wealth to begin with, how they can maintain it, and how they ultimately manipulate the system to work in their favor.

Each and every presidential election is a costly experience. Although political leaders make it seem almost effortless to mobilize voters and gain recognition in the public consciousness, there are many costs associated with running an election campaign. Between bus tours, advertisements, and campaign branding, it is necessary for candidates to generate enough funding to amplify their message. In addition to self-financing, candidates can receive funding from small donors, PACs, corporations and parties.

The amount of money it takes to pull off a successful election campaign has been increasing gradually over time. For example, during the 1992 general election , the combined campaigns of George H. W. Bush, Bill Clinton, and Ross Perot spent 195.6 million USD, which is equivalent to around 360 million USD when adjusted for inflation. To win the 2004 election, George W. Bush spent 345 million USD which was the most expensive campaign at the time; this was soon surpassed in 2008 where the total amount of money spent by and for Barack Obama’s election campaign was around 730 million USD.

The phrase “money makes the world go round” rings true in the world of American politics. Money passes through the hands of donors, lobbyists, and politicians, influencing elections and our legislative process. Let’s follow the dollar by examining prominent politicians with dark money affiliations, outlining how money in lobbying works, and analyzing current legislation that aims to target campaign finances.

Every individual has the power to advocate for their own beliefs. Political change is not a spectator-sport, and can instead allow us to take part in cultivating inclusive political culture through advocacy efforts. Joining organizations and groups, peacefully protesting, calling local legislators, and lobbying are just some ways for an individual to get involved and create change in their communities.

Anyone can become an activist through joining advocacy groups,  by signing petitions, contacting your Senators, and educating your peers on the legislation in question. Activism doesn't have to stop there, take time to research and understand legislation that affects your values or passions. Advocate for what you believe in.

The Follow the Dollar resource guide aims to make democracy more accessible to you. With these resources, we hope you will have gained an array of information regarding money in politics. Our day-to-day decisions can host a multitude of broad effects on our political system and we hope that this guide provides you with the necessary information that can get you started on your journey through community activism. H ave your voice be heard and always make sure to Follow the Dollar! 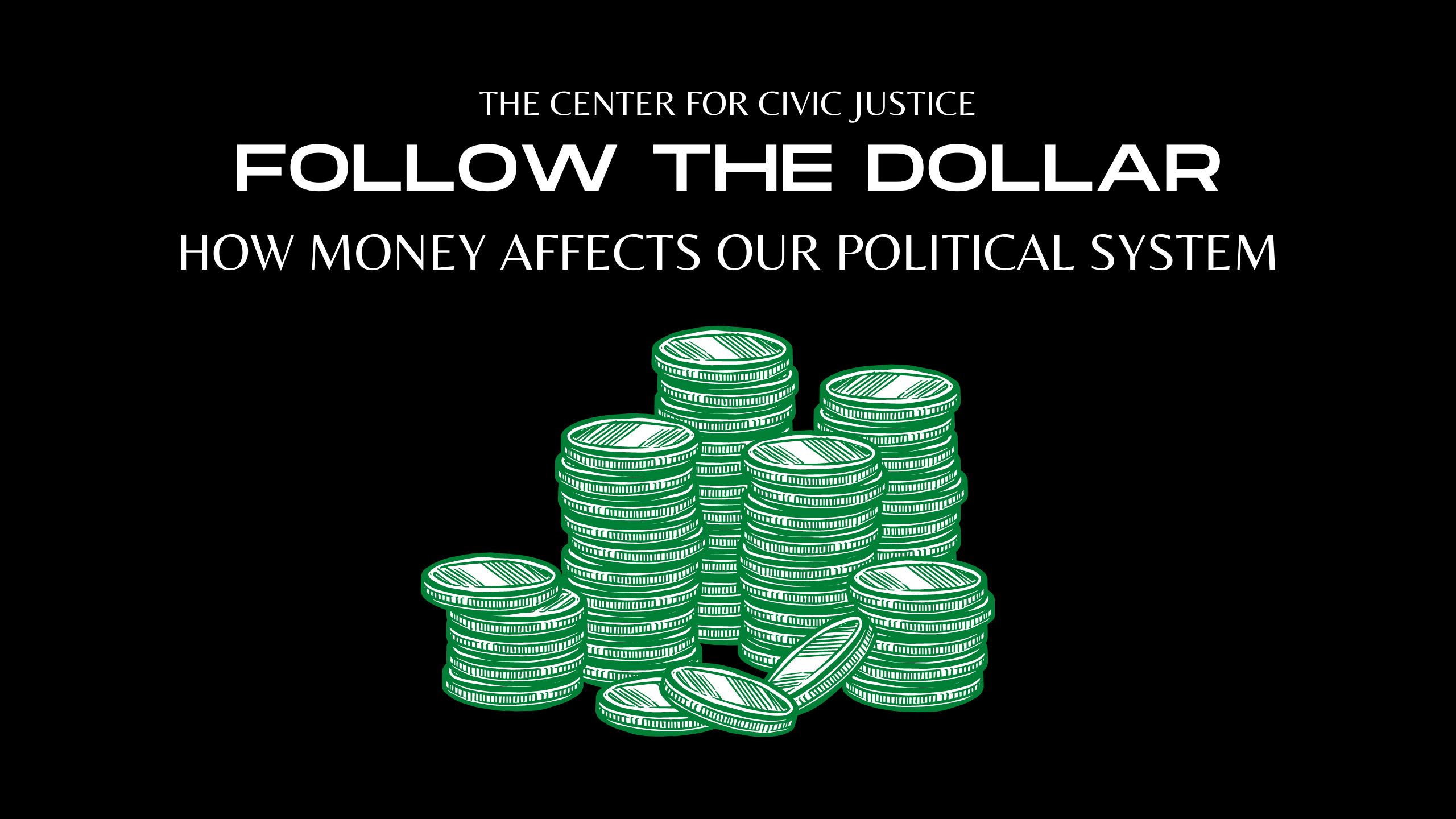